In Marvel’s “Captain America: The Winter Soldier,” Steve Rogers teams up with Natasha Romanoff, aka Black Widow and Sam Wilson aka Falcon, to battle a powerful yet shadowy enemy in present-day Washington, D.C. 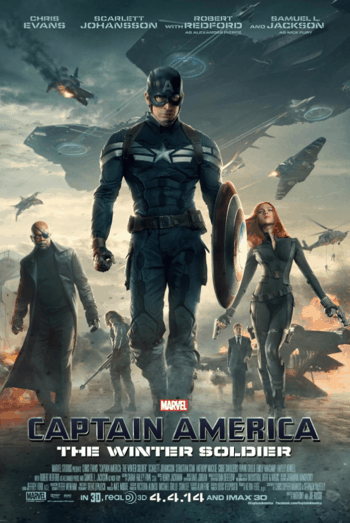 This past weekend “Captain America: The Winter Soldier opened with a record-breaking $96.2 million which is the top April opening of all time and worldwide has brought in $303.3 million. Even though I had already screened the movie a few weeks ago I was super excited to have a date night with my husband on Friday so that he too could experience the awesomeness of “Captain America: The Winter Soldier.” My husband loved the movie and as we exited the theater (proudly wearing our Captain America t-shirts) a cute married couple stopped us to ask if we liked the movie. My husband was so excited to be able to tell them “yes, it’s really good, you should see it”.

In this movie we are introduced to Sam Wilson aka Falcon.  He has been a fan favorite in comic books since 1969.  Sam Wilson is a ex-military paratrooper who works with veterans in Washington, D.C..  He was trained by the military in aerial combat tactics with the help of a jet pack with wings.  Falcon teams up with Captain America and Black Widow as an ally to stop a threat that endangers the lives of many. 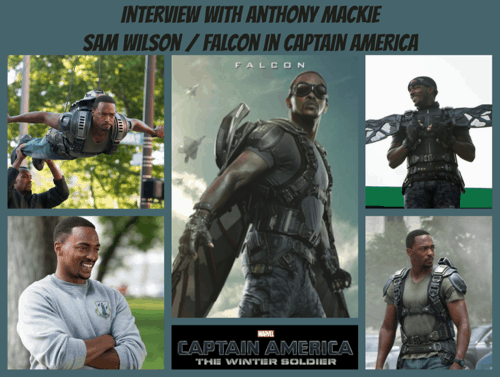 As part of my trip to Los Angeles a few weeks ago I had the opportunity to sit down in an interview room with 25 other bloggers and talk to Antony Mackie about his role as Sam Wilson.  Anthony Mackie is hilarious, he had us laughing from when he started the interview to when he left the room.

Anthony Mackie has been a very busy guy leading up to this role as Sam Wilson. He was classically trained at Juilliard School of Drama and has appeared on Broadway and numerous films since 2002. He made his film debut as Papa Doc in “8 Mile” and then was cast by Spike Lee in “Sucker Fee City” and “She Hate Me.” Mackie also appeared in “Million Dollar Baby,” “We Are Marshall,” “The Hurt Locker,” and “Runner Runner” just to name a few.

When Anthony Mackie first started acting he wanted to either do a Western movie with Clint Eastwood or be a Super Hero. With his role as Falcon in “Captain America: The Winter Soldier” he got his wish is now the first African American Super Hero.

According to director Joe Russo “Mackie has great integrity as an actor.  That’s what we love about him.  He has an incredible screen presence.  We wanted Falcon to be part of a team with Cap, not a sidekick.  In order to do that you need an actor who can hold the screen opposite all the other great actors that are in the film.  You need somebody who can flesh that character out with limited screen time in a very three-dimensional way , that’s Mackie.  The tone was really important to that character as well, because Sam is a guy who’s his own person who can challenge Cap when he needs to challenge Cap and can support Cap when he needs to support him”

When filming started Mackie didn’t want to ask the veterans Chris Evan, Scarlett Johansson and Samuel L. Jackson for any pointers because he wanted to experience working on a Marvel movie from his own perspective.

Mackie enjoyed his experience working with the cast and Marvel Studios.  He said that he and Chris Evans have a good relationship and we were like seven year olds when they first started filming.  They were very exited at first but then looked at each other and said “We are 35 year old men in costumes – we are losers.”  But as days turned to weeks and weeks into months they were proud to be 35 year old men in costumes because they were Super Heroes. 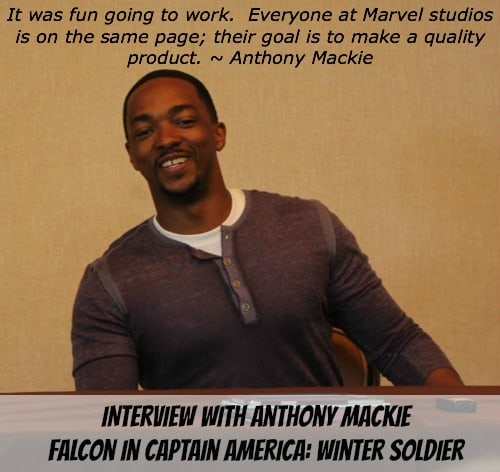 When asked about working with Scarlett Johansson Mackie said that she is a low maintenance actress and just a regular chick; she’s not a diva and she goes with the flow. He feels that she is extremely talented and this helps keep her grounded.  He went on to explain that she was a lot of fun and she’s down to earth and cool.

How to be a Super Hero

Mackie feels that the hardest working actors in Hollywood are flying super heroes. “There is nothing natural like flying for humans, if you fly, it sucks.”  However, he feels that has has the best stunt man in the business because he takes the brunt of his hits for him and they have previously worked on at least five films together.

According to directors Anthony and Joe Russo “It was important that Sam was grounded as a character and that the technology was vaguely plausible, that it responded in some way to the rules of physics, so that the character would fit into the tone of this movie,” continues Anthony.  “It was also import an that his abilities be unique and special.  It’s not the suit that’s special; it’s him.  It was paramount that thematic in the suit isn’t wings and thrust.  The magic is in how Sam uses it.  That’s what helped define the choreography of how he flies, how he uses both air and thrust to maneuver.  He’s a human fighter jet.”

On his first day of shooting Mackie expected to film something easy such as walking down a hallway or eating a sandwich.  But he was in for a surprise when the first scene he shot was of him jumping off a 60 foot platform backwards and shoot at jet plane that was coming toward him.  From there each day just got harder and harder and he was exhausted but loved it.

To prepare his body for the role he ate Salmon, Chicken, Tuna Fish, Brown Rice and Asparagus at noon every day for three months.  He woke up at 6:00 am then go to gym for an hour and then rest and eat every 3 hours.  At 7:00 pm he would go back to the gym and lift weights for an hour and a 1/2 a then go to bed.  He had to give up a lot of his favorite treats such as ice cream and Jack Daniels but according to Mackie, when you take on a role like this fitness is a life style and you need to embrace it. 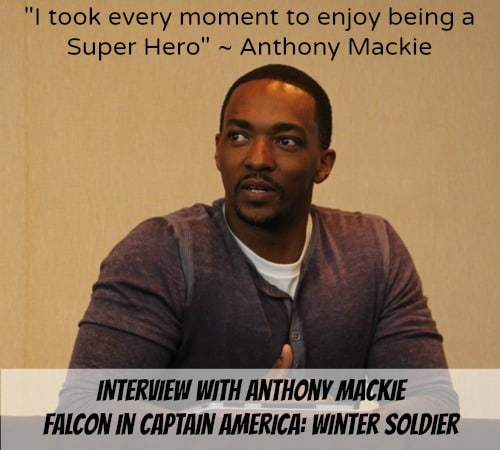 Mackie didn’t do any skydiving lessons to play Falcon, instead he did workouts that simulated the feeling of flying.  He dove into swimming pools a lot and sometimes from platforms as high as 20 feet.

When Mackie was a kid there wasn’t a person he could look up to other than his Dad. Now it is really exciting that little boys will have someone to look up to and someone they can be for Hallowen.  He explained that when he first got this role he cried.  He thought about next Halloween and when he opens the door to see little Falcon’s there waiting for candy.

The interview with him was really fun and I am going to include the audio here so you can enjoy it as well., it runs for about 15 minutes. 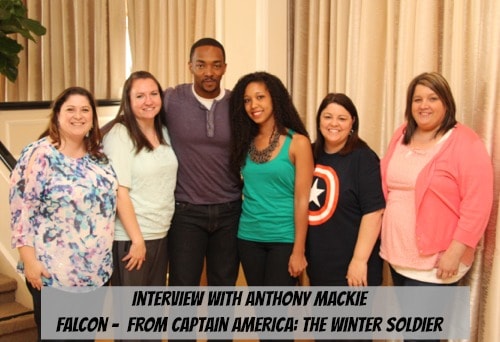 Here is a look at the behind the scenes of filming with Anthony Mackie.

Find more information about Captain America at marvel.com/captainamerica and onFacebook and Twitter. You can follow along on my Captain America adventure by searching the hastag #CaptainAmericaEvent on social media.