Are you as sick as I am of the media capitalizing on the myth that mothers are at war with each other? 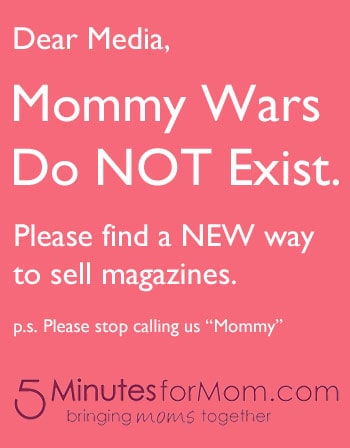 Before I had children, I never thought I’d follow ideas and suggestions from the Attachment Parenting community. When my older sister had her children and chose to “wear her babies” and “co-sleep”, I thought her choices were different and possibly unnecessary but I wasn’t “AT WAR” with her about it. I just didn’t understand… YET.

Then I had a high-needs baby who responded well to baby-wearing and co-sleeping and I was thrilled to have been exposed to the ideas earlier. I began to follow some of the attachment parenting suggestions that worked for my baby and me.

When I had my first baby, breastfeeding seemed like the logical choice as to what was best for my baby, so I decided to nurse. My baby and I had challenges in the first couple of months, but I found support and help from lactation consultants and other mothers. I ended up nursing both my babies for two years each.

The fact is moms are not at war with each other. But that doesn’t sell magazines.

Sure when you ask people their opinions on a subject, they’ll usually tell you their thoughts. And often those opinions may come from places of limited understanding and be biased by their own circumstances, beliefs and experiences.

And if you pit one person against another person who has a different set of circumstances, beliefs and experiences, they’ll likely disagree and may even start to debate and possibly even… FIGHT.

When the editors at Time magazine put a shocking image of a sexy woman nursing a young boy in army fatigues on the cover of their magazine, their intention was to create controversy and sell magazines.

(If you haven’t seen the article, you can read Katherine Stone’s review of it, but I refuse to republish their image nor send them any links. I encourage you to also not reward Time by clicking through to their article. And please do NOT buy the magazine.)

But we as media consumers must stand up and say we are sick of this negative campaigning to exploit mothers and create controversy and animosity surrounding parenting decisions.

I believe there are some basic facts that media need to learn:

Let’s spread the message that we mothers are tired of the manipulative myth of “Mommy Wars”.

Being a mother is hard enough, get out of our way!

Written by Susan, co-founder of this Mom Blog 5 Minutes for Mom

ShareTweetPinPocketMail
Take the White Sock Test and You Could Win a $15,000 Home Makeover
Have You Ever Struggled With Acne?