What was supposed to be a 20 minute round-table interview with Emma Thompson lasted almost twice that long. After that, we took a picture with her, and while we were gathering around, she volunteered to kneel so that we could all gather around her. Both of these actions show her kind and gracious manner, but this last bit illuminates it even more.

As we got up after taking the group picture, and Emma’s “people” were trying to usher her out, a teen girl who was there because she was interning at one of the magazines represented at the roundtable said, “I have one more question – what’s it like to win an Academy Award?”

Emma answered by saying it was “really cool.” 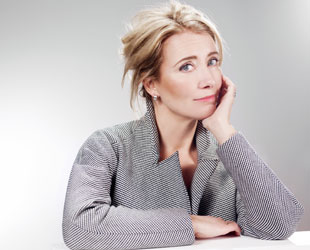 The teen told her it was a goal of hers to win an Academy Award. After talking with her and finding out what she was studying and what she was doing now, Emma gave her a bit of advice. One of the other interviewers, Beth Feldman (Role Mommy) and I were listening. She said, “I wish I had heard this when I was that age. I wanted to be on Broadway, but . . . .”

For all of you who might aspire to be an actor (or like me, simply wonder what it takes to achieve such success), I wrote down this golden advice from a person who has received many nominations and a couple of wins of that coveted golden statuette:

Advice to an aspiring actress, from Emma Thompson

For more insider scoop of the movie-making trade, check out my review (and giveaway) of the Nanny McPhee Returns novel and film diary over at 5 Minutes for Books.

ShareTweetPinPocketMail
What’s Your Opinion on Private Parties and Off-Site Events at BlogHer?
100 Classic Books on the Nintendo DSiXL