While Susan and I were in NYC last week for BlogHer10, my eight year old son was at camp — without me!

We go to camp every summer as a family to volunteer for a week. But this summer, Jackson wanted to also go for a week as a camper.

So the day before I boarded the plane for NYC, I dropped Jackson off at the boat that took him to an island for his four-day, sleep-away-from-home camp.

But before I could drop him off, I of course had to pack his bags!

I think the hardest part of sending my eight year old son to camp was imagining the mess of clothes and towels on his cabin floor — dirty and clean all in one heap — and my son wearing dirty underwear all week long.

And almost as bad as picturing the dirty underwear, was thinking about his towels. I am a clean towel freak. I take tons of towels with me when I go to camp and the thought of him wiping his face on a towel that he had dropped on the filthy, wet floor is almost more than I can bear!

Thus, I was determined to pack his bags as effectively as possible, to give him every advantage in the mission of keeping clean.

I bought these Heys suitcase organizing bags off the shopping channel in the middle of the night last year and I love them! I use them on every trip I take. 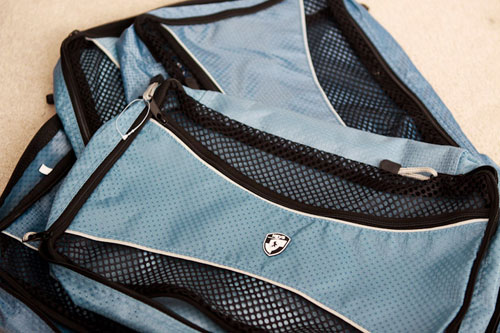 After washing and folding, (we came home from a weekend away the night before and so I had to quickly wash his clothes,) I got ready to organize. 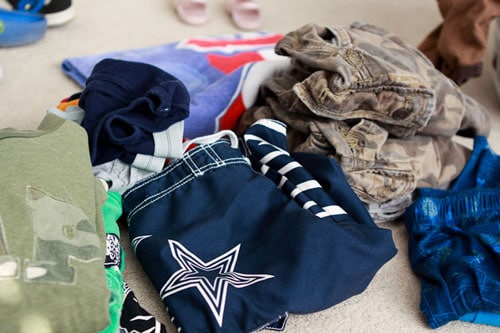 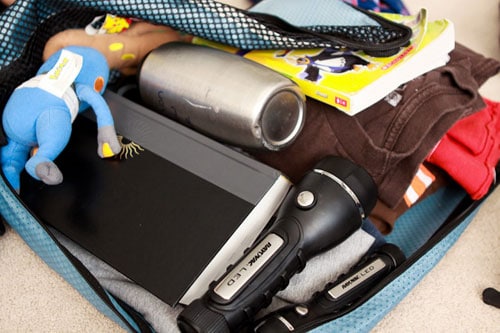 I also added in other camp essentials like flashlights, water bottle, Bible, and a book for night-time reading if he couldn’t sleep. 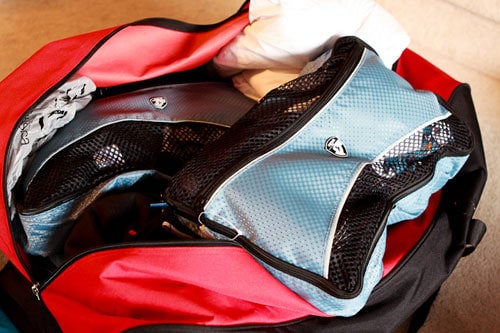 I must say, it was a little packing masterpiece. 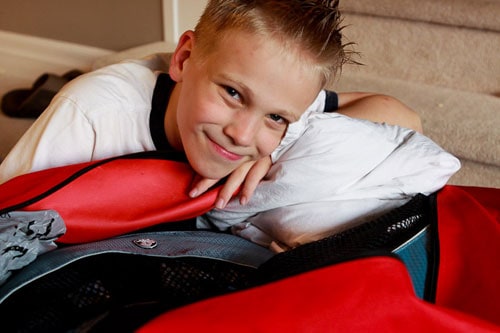 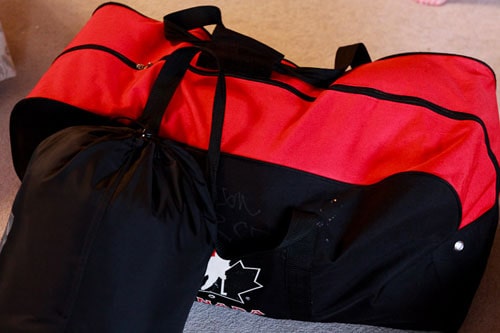 BUT, the next morning when Jackson went to lift up the bag, it was too heavy! So I quickly searched the garage and found a duffle bag the same size that had wheels. I quickly moved everything into that bag, but in the rush and chaos I forgot to put his sleeping bag in the car!

I realized about 45 minutes into our drive to the boat. Fortunately Phil wasn’t far from our house and he went home, got the bag and met us at the boat before it left. Good grief.

I was at BlogHer when Phil picked up Jackson after camp, so I didn’t get to see the condition of his bag when it came home. But I heard it was a disaster — a wet, disorganized mess!

But, Jackson said he been late packing and threw everything thing in his bag at the last minute. So the wet items only went in at the end of the trip. But he also said that he had dumped things on the floor and he just grabbed clothes and ran. He said he didn’t even know what was clean or not. Sigh… I am trying hard not to be horrified.

He is a boy. And he can survive dirty underwear and filthy towels, right?

Jackson had a blast at camp and wanted to go right back. So, apart from the mess of dirty clothes, camp was a success!

What are you tackling this week? Link up show off…

Tell us what you’re up to with all your other tackles… housework and otherwise… add your link to your tackle in the MckLinky below!

Each week on Tuesday, we are posting before and after pictures of a project or trouble area that we tackled this week.

Find out more about Tackle It Tuesday here.
The project can be little or big – whatever you want.

Basically, Tackle It Tuesday is about giving ourselves incentive, deadlines and satisfaction in getting our household tasks done.

(It doesn’t even have to be housework… just whatever is on your To Do list.)

If you tackled a project this week, just add a comment and add your link below.

If the thumbnail Linky doesn’t work for you — or you prefer the old style, you can enter in the linky below.

Written by 5 Minutes for Mom co-founder Janice.
You get our feed, right?

Did you know that Susan and I also have a pedal car store and a rocking horse store?