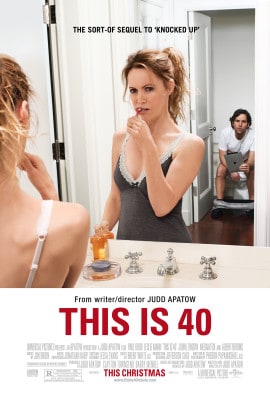 On Friday, December 21st, a new movie hits the theaters and the title is not the only direct thing about the film. This is 40, starring Paul Rudd and Leslie Mann, and written and directed by Judd Apatow, is being billed as a sequel of sorts to the 2007 film Knocked Up, a hilarious and often bawdy romp about a life that can be built after an unexpected pregnancy.

This time around, Paul and Debbie, the married couple who were secondary characters in Knocked Up, take center stage. Their life and marriage, good and bad, are on full display, and trust me when I say that I predict many a married couple will share knowing glances while watching! 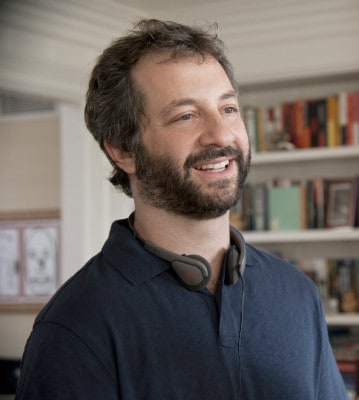 After making movies like Knocked Up and The 40-Year-Old Virgin, Judd Apatow might be known for his crude humor and fabulous one-liners, and his core group of actors whose humor and sensibilities seem to mesh perfectly with his films. Upon re-watching Knocked Up, the thought crossed my mind that perhaps the emphasis on his humor overshadows the great amount of tenderness and emotion that are also regularly present in his movies.

I recently had the opportunity to attend a screening of This is 40 and to participate in a blogger roundtable interview with Apatow, and after talking with him, I was left with the impression that he really does put his heart into his work.

If you haven’t seen the trailer yet, take a couple minutes to check it out:

In This is 40, Apatow has the unique experience of directing his own wife, Leslie Mann, in one of the lead roles. Mann plays Debbie, the wife in a marriage that is full of laughs, arguments, love, and exasperation. For Apatow, the whole point of making this movie was to portray a reality of a lifetime commitment in a way that movie-goers could relate to.

I knew I wanted it to be a meltdown movie that would end with them rebonding. Some of it is also not wanting to take responsibility for what’s actually happening, so, it’s easier to blame your spouse than to think about what … you’re bringing to the party. 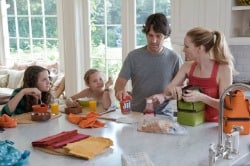 Okay, I’d be lying if I said that I didn’t understand that tendency… and I’m sure my husband would agree. Throughout the movie, Debbie and Pete, played by Paul Rudd, have their fair share of troubles, from the small, everyday things to the big picture ones, too. As both perspectives are portrayed, it’s not easy to cast husband or wife as either the “good guy” or “bad guy.” What I find to be more realistic is that they take turns being each!

As Apatow explains it, his marriage to Mann helps to inform his work as writer and director.

What’s helpful for me is to deeply think through Leslie’s point of view because it’s so easy to just think, “I’m right. She’s annoying.” So, to have to write her point of view and show the effect of certain behaviors that I have or men have is helpful.

This is serious movie-making, with lots of laughs

What I really took away from the interview with Judd Apatow is just how committed he is to creating movies that are more than just some cheap laughs. Sure, there’s a level of crass humor in his films, but the characters that he brings to life are relatable and realistic. His intentionality in his work makes me look forward to his future projects even more.

There are very few movies just about people that don’t have gigantic action elements or superheroes. This world of the small human drama comedy is tiny. We don’t get that many of them. We get more of it on television. So, if I don’t write it, it’s a long-shot that it will just suddenly appear.

This is a movie you should see 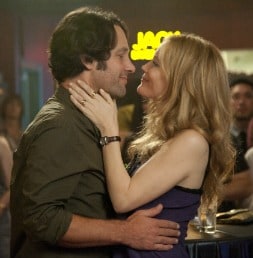 My humor sensibilities were well-matched with This is 40, but even more than that, I was touched by the portrayals of a husband and wife who are trying… and often failing… but still trying. For me, that’s the ultimate reality. A long-term commitment is never easy, no matter how many romantic comedies might try to give us that impression.

I’ll leave you with one last quote from Apatow that I think perfectly sums up what he intended with the movie, and what I definitely took away.

Come back tomorrow to hear about our group interview with Leslie Mann and Paul Rudd, and their takes on marriage and parenting, two topics we all can relate to!

Disclosure: Universal Studios paid my expenses to attend the press junket for This is 40, but any opinions about the experience or the movie are completely my own.

ShareTweetPinPocketMail
Does Your Child Have Trouble Falling Asleep? (Giveaway)
Girls Can Design Their Own Clothes (Giveaway)