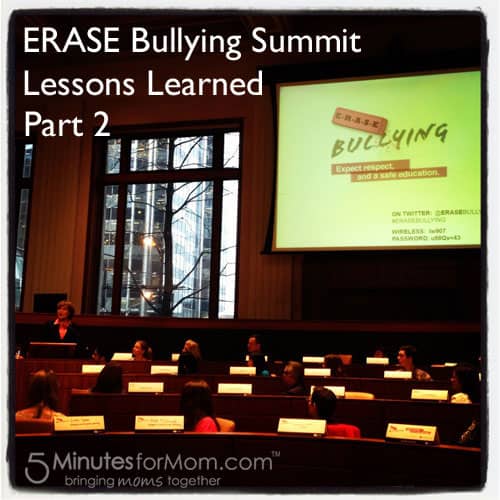 The summit brought together anti-bullying experts, educators, press, students and others to learn about the new ERASE Bullying program and the anonymous student online reporting tool that launched the same day.

I learned so much important information that I believe we need to share with every parent and teacher. The notes in this post are all from the break out session with Barbara Coloroso.

I will share more notes from the rest of the summit tomorrow in Part 3.

Taunting is different than teasing. It’s not a slope that starts as teasing and becomes taunting. Teasing is part of a relationship that you care about — it is natural and okay. Taunting severs a relationship.

Taunting is bullying. Teasing is not.

The language we use to describe the interaction is critical because there is a difference.

There is also a similar difference between flirting and sexual bullying. If you are flirting and the other person gets upset or doesn’t respond, you stop.

Verbal bullying isn’t just the words we use. Only 20% of what we communicate is through words.

Bullying starts by putting people into that “it” category. By dehumanizing and no longer seeing or caring about them as people, bullies can do anything to their targets and not care that they are hurting them.

By “faulting” the victim or classifying them in a group of contempt (eg Nazis categorizing Jews and dehumanizing them), people can carry out horrendous acts without caring.

Verbal bullying and dehumanizing targets is how bullying starts and how it can lead to genocide.

The Roles of Bully and Bullied

People can play a role — either bully or bullied — for so long that it becomes who they are.

When children are relentlessly targeted, they can eventually succumb to the bullying. A healthy child that starts to succumb to bullying can develop complex post traumatic stress disorder.

When bullying is repeated overtime with no relief, eventually kids internalize it.

What NOT to Say to a Bullied Child

You do NOT use conflict resolution for bullying.

You don’t resolve bullying you STOP it!

What To Say To Bullied Children

You want to empower a target with good lines to say.

Barbara disagrees with some bullying experts who suggest to say, “Stop that hurts” or “Thank you for making me stronger.”

We want to teach kids to be assertive, not passive. To stand strong and say, “That was mean” or “That was cruel” or “That was sexist” or something like that.
And then say, “I don’t need this. I’m outa here.” And WALK AWAY.

You can’t give kids all the lines to say, but brainstorm ideas together. Give them the core-strength and wisdom so they can come up with things to say.

Stay strong, walk away and use self talk to keep yourself in tack. Tell yourself that you are a decent person and that is the other person’s problem.

Get the target involved in other activities such as choir, band or sports. You can not sing in a sunken, passive posture. When you sing, play instrument, make pottery, act in drama or play sports you have a strong, open, empowered stance.

Give targeted kids the opportunity to do good in other ways. Helping other people and doing “good” for others is the best way to feel good about yourself. (But do not put them on an anti-bully committee. Give them other opportunities.)

They need a place to report bullying that is safe.

What To Say to a Bully

These notes in this post and Part 1, only take us halfway through the day at the summit. I will continue with notes from about Cyber-Bullying and more in Part 3.

If you want to ensure you don’t miss Part 3, please sign up for our email list below and I’ll send out an email with the link.

During the summit, I was tweeting quotes from both my Twitter handles @5minutesformom and @susancarraretto using the hashtag #ERASEBullying.

Also, I created a Stop Bullying Pinterest board to share many of the helpful resources related to the summit and beyond.

ShareTweetPinPocketMail
Sneaky Tips for Easy Dining With Kids on Pizza Night… or Any Night!
Around the Blogosphere-Add YOUR Giveaway Link