Guest contributor, Serena, gives 5 Minutes for Mom readers a sneak peek behind the scenes of the hit show Pan Am…

Back in the ‘60s and ‘70s Pan American World Airways or Pan Am offered travelers the ultimate comfort and luxury in air travel. Renowned all over the world, Pan Am focused on international flights, presidential charters and occasional domestic routes – there was gourmet meals, drinking and pure enjoyment in the sky. It was the ultimate way to fly and a coveted job in the where Pan Am stewardesses were even the top 10th of female wage earners in the U.S. The ‘glory days’ of the airline and air travel have been captured on the popular show Pan Am that focuses on four stewardesses – Maggie (Christina Ricci), Kate (Kelli Garner), Laura (Margot Robbie) and Collette (Karine Vanasse) – who traverse the globe looking for love, adventure and excitement. Taking place on a 707, the show captures life in the sky as well as the energy of the 60s that makes for an incredibly entertaining new show.

Touring the set of Pan Am

I recently had the unique opportunity to tour the set of Pan Am and interview Michael Mosley (“Ted”), Margot Robbie (“Laura”) and Christina Ricci (“Maggie”) to learn more about Pan Am and their experiences filming the show.

As a part of the tour I was able to view and walk on the recreated 707 airplane – where a majority of the action is filmed. Parts of the plane were discovered all over the country to create a plane for filming (a green screen is used for outside shots) complete with spacious seating and tall ceilings. Even the cockpit was accurate and I learned that Mike Vogel (“Dean”) is actually a pilot-in-training so much of the action that takes place there is accurate to what a real pilot would do.

During the tour, I also had the chance to visit the wardrobe department and view the garments from the ‘60s as well as the incredible stewardess costume that the ladies wear on the show. Costume designer Ane Crabtree (Luck, Justified) was charged with recreating Pan Am’s stewardess uniforms.

“I always start with reality and authenticity and I hang tight to the integrity of the original,” she says. “It’s easy to go the other way but it cheapens things.” She added, “We took a little liberty with the stewardess uniform, but only a little. We got the original uniform, copied it to the letter, but changed the color ever so. We heightened the original color, which looked little flat. In changing the color, we got responses from real Pan Am stewardesses on set that were around in 1963 who said, ‘We love the uniforms.’ The uniform is so splendid in its simplicity of design and what it’s supposed to do, which is to compliment the body and the service to perform.” 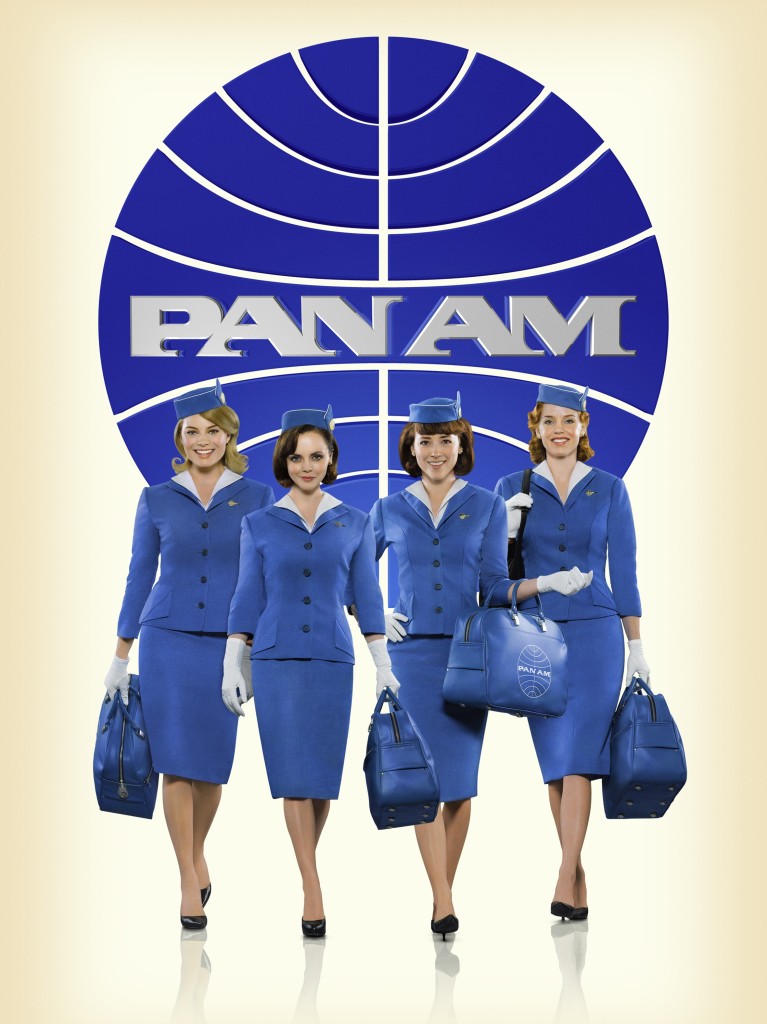 Meeting the cast of Pan Am

After a tour, I was able to meet with the stunning cast of film veterans (Christina Ricci) and TV actors (Margot Robbie). Since the show is seen through the stewardesses eyes, I was interested to learn more about Margot Robbie’s experience playing a character in 1963 – a time when there was racism, political turmoil and a world where the feminist movement hadn’t started yet.

Robbie stated, “The masochist attitudes in the show are sometimes comical; however sometimes they are very serious. “As an actor, it is important for me to play the role appropriately.” Adding, “the strangest thing (about an anti-feminist culture) is that it was to be expected. It was not shocking.” With respect to her role, she noted, “you have to ignore your contemporary views and play the role for what it is – since this was the attitude of this time.”

Michael Mosley (who plays Ted) added, “Many people were in a bubble” and thought, ‘the sky is the limit’ with new gadgets and their 2.5 children. However, this wasn’t always the case. He noted that Pan Am deals with the history of the time while also featuring entertaining and relatable characters.

Speaking with Christina Ricci, I was curious as to why she decided to get into TV after being a movie actress for her whole life. She stated, “the pace is fun and it’s fun to be with the same character that I develop over time.” Adding, “I also love that my character is a ‘wild card’ that she doesn’t come from a traditional background and had to climb her way to the top. Adding, “I love that she takes risks and I think that makes her very human.”

I also wanted to learn more what appealed to her about Pan Am. She stated that she was looking to do TV for a long time for some stability in her life. Adding, “I have been doing this (acting) for a very long time and I also think there is better writing and, even talent on TV.” “I really liked the concept. I liked that it was set on an airline. I really liked this period – I find it really fascinating.”

As a show filled with excitement, adventure and intrigue – both in the air and on land – Pan Am is entertaining way to learn more about this fascinating airline while taking a peak into the ‘60s.

A Brooklyn-based writer and mom of two, Serena Norr created her original blog Seriously Soupy as a way to learn more about soups and to experiment with new ingredients. She also writes about healthy living, parenting and lifestyle topics on her blog Mama Goes Natural.