5M4M Contributor Christie O. reviews a blast from the past: The Muppets back on the big screen and they’re funnier than ever! 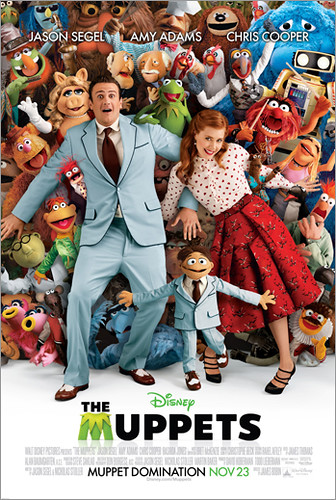 This week I’m giving thanks for a little piece of nostalgia that hits theaters today in the form of The Muppets.

As a huge fan of The Muppets of years past, I didn’t know what to think when I heard it was coming out. I wasn’t sure Disney could pull it off (which really is just sillytalk). I wasn’t sure if it would be one of those movies that could transcend generations. But in the end I figured it out: the previews just don’t do the movie justice.

The Muppets starts out in Smalltown, USA, literally, where Gary (Jason Segel) and Walter, his puppet brother (which was a little confusing until I remembered that this was a world in which humans and puppets could actually be brothers), are best friends. Gary is all grown-up with a girlfriend (Amy Adams) and the couple decide to go on a trip to LA for their 10 year anniversary (of dating, since Gary still lives at home with his puppet brother). 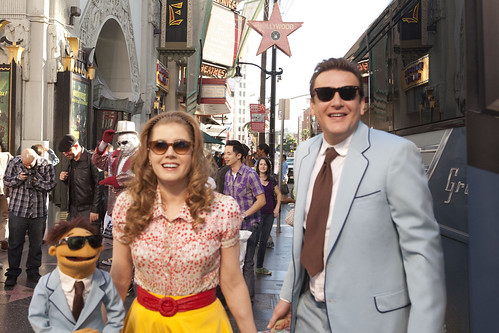 Walter is a huge fan of The Muppets since he is just like them, so they decide to bring Walter along to visit the old Muppets studios.

However, the studio is all decrepit, the gang’s all split up –Fozzy’s doing stand-up in Reno, Gonzo’s into the used-toilet business and Animal is in Anger Management  — and an evil oil tycoon (Chris Cooper) threatens to tear down the old studio unless the gang can get back together and save it. 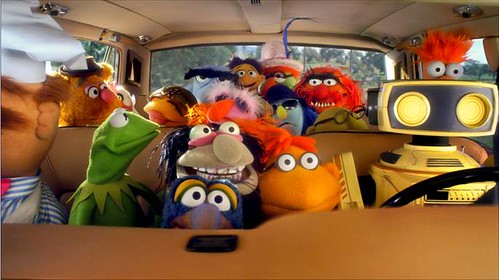 The Movie and The Sum of its Parts

First of all, how can you not like a movie in which the characters randomly burst into song? And better yet, where the songs are so silly they’re hilarious? Like Amy Adams having a “Me Party” (“There’s no one at this party that I don’t already know...”) or Jason Segel singing about whether he’s a “Muppet or a Man?”

There are cameos, – The Muppets sing a Nirvana song, the bad guy’s evil laugh is just him saying “meniacal laugh, meniacal laugh”…OK, I’ll stop spoiling all the best parts. (Don’t worry – there are more.) 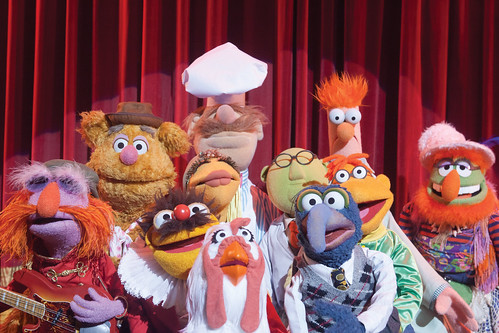 If you’re wondering if it’s the classic Muppets we’ve come to know and love as kids, it is. They are all in it, every one of them, even the ones I had forgotten (sorry, Muppets!). But Segel, who wrote the screenplay along with Nicholas Stoller (Get Him to the Greek – HILARIOUS!)  brings to it a humor that I think was missing from the earlier versions.

While I loved the classic Muppets because  it was sweet and silly and I grew up with the characters, it wasn’t the kind of funny that makes you outburst. And this movie was truly funny. I actually outbursted. Ya know when there’s a movie that you’re watching and all of a sudden the humor catches you so off guard that you outburst? That’s when I know it’s funny. So therefore, it gets my “Outburst Seal of Approval.” The writers actually had guidance from the original Muppets writers, so it was a big collaborative.

On the flip-side, there were the touching moments, like revisiting the song “Rainbow Connection” and clips from the original show with the original open. Those are the parts that literally transported me back to childhood and Thanksgivings and Christmases at my aunt’s and grandparents’ house. It was so long ago but it still feels like yesterday.

And that’s what “The Muppets” does for you. It brings your favorite characters back to life, even funnier than they were before, and set them in the relevant and present day, which makes sharing them with your children that much more special. My sons listening to the Rainbow Connection and seeing what the original Muppets opening used to look like, those were really special moments for me sitting in the theater with them.

That’s how a movie is supposed to feel.

Go see it. If you miss The Muppets, if you loved The Muppets once, if your kids love them, fall in love with them again. And laugh out loud. It’s perfect for families.

The Muppets opens today (11/23) and is rated “PG.” And be sure to check out the Roadtrip Game you can download HERE.