Disney sent 5 Minutes for Mom contributing blogger Dawn Cullo to Los Angeles to attend a live taping of Dancing with the Stars. Dawn’s expenses were paid for the trip but no other compensation was paid and all opinions are Dawn’s. 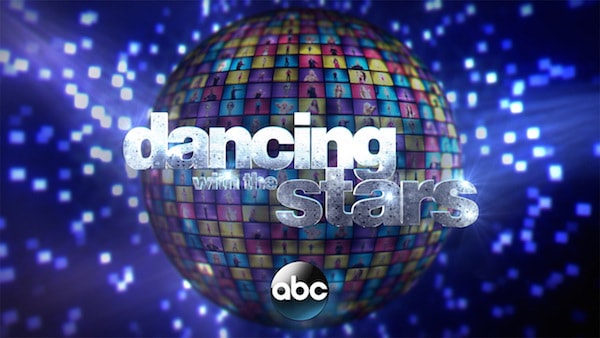 I have been watching Dancing with the Stars since Season 2 (2005) and my girls have grown up watching it too. We all love the show and enjoy giving our own scores and critiques of the dances.

When I heard that I was going to get the chance to step foot ON the ballroom floor and be an audience member of Dancing with the Stars I jumped up and down on my bed. Not only did I get to be in the audience for a taping but I also attended a dinner where many of the dancers and stars showed up.

I am a Ross Dress for Less kind of girl and when I heard we were going to be in the audience I knew I had to find something with sparkles. I went to three different Ross stores and tried on at least 20 dresses – no joke! But then finally I found it. This awesome blue dress was one of the last ones I tried on. I hope I get to wear it again someday because I really liked it. 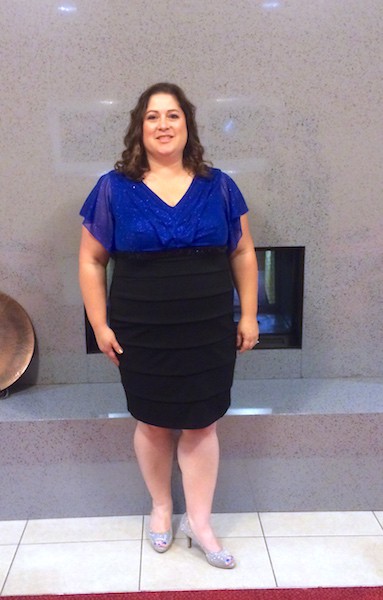 I arrived at CBS Studios with my blogger friends and we were whisked inside the sound stage. As we walked through the building Tommy Chong walked past us and then I spied Erin Andrews getting a make-up touch up. Before I knew it we were walking on this shiny black floor and we were on the stage. It was amazing! They let us walk around the stage and the ballroom floor and took this amazing picture of our blogger group.  I am in the last row in the blue dress. 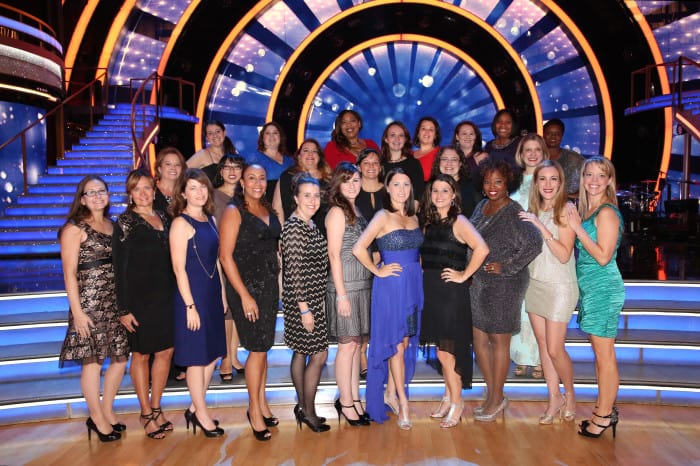 We were allowed to take pictures by the judges desk too. We only had a few minutes before we had to head to our seats. 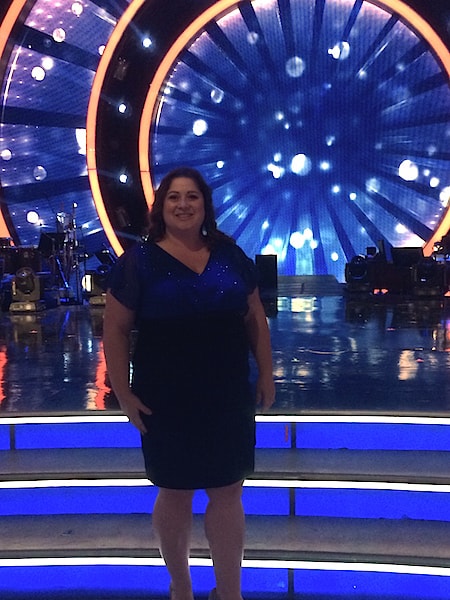 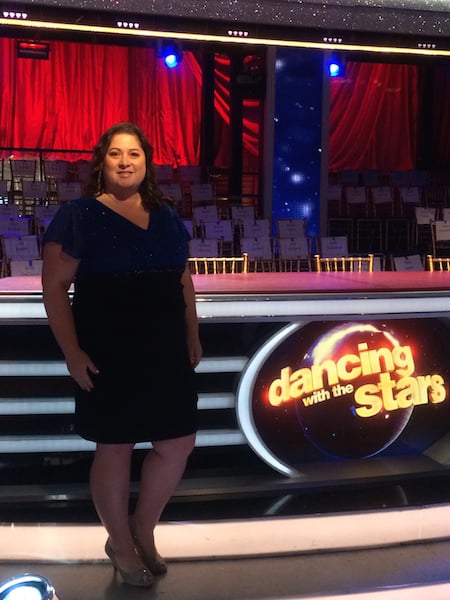 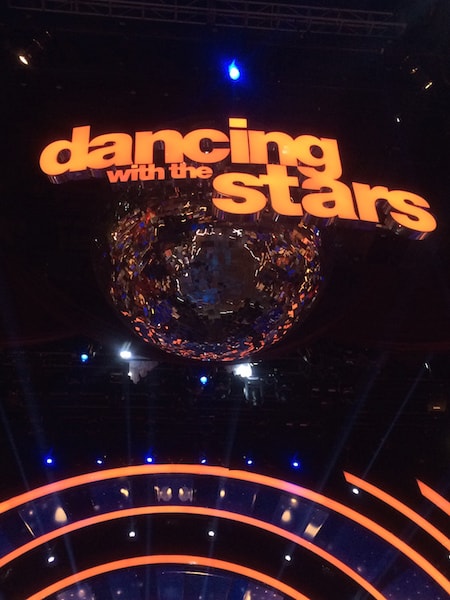 I was so excited to be there I could hardly walk up the stairs, THE very stairs that the dancers walk up after their performance when they go to talk with Erin. 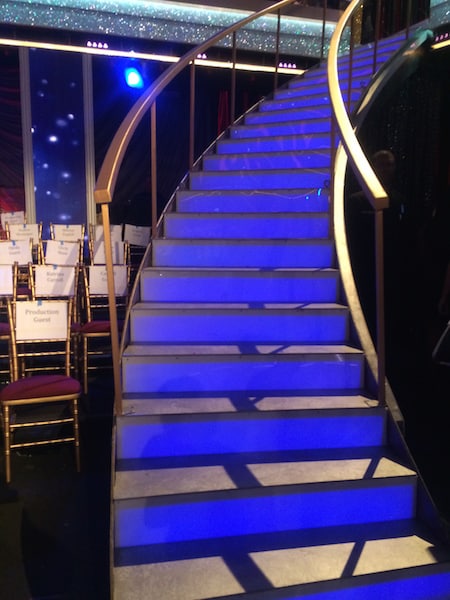 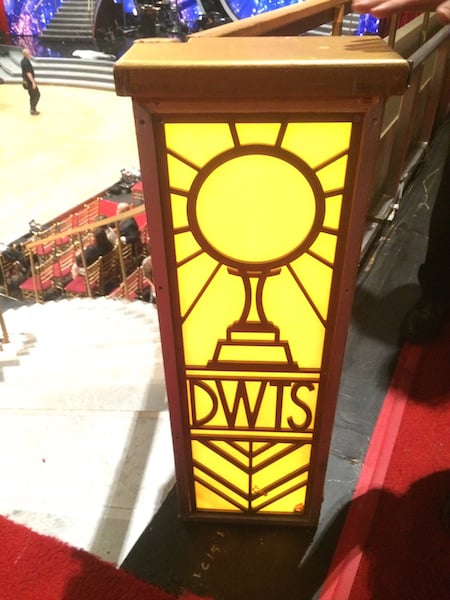 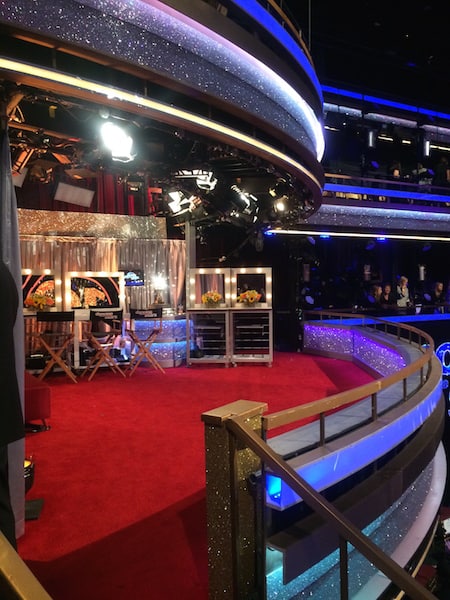 We had great seats on the second level across from the judges. 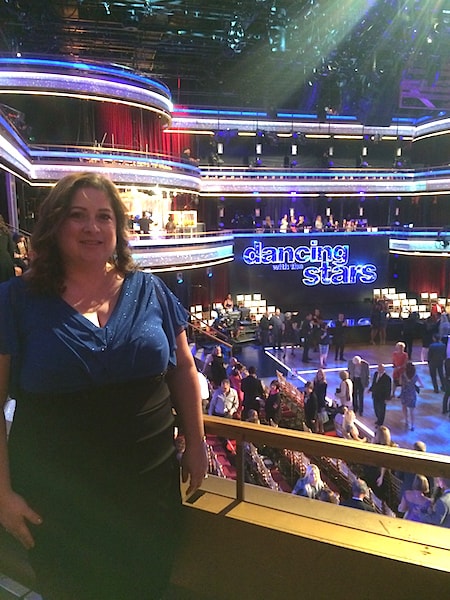 Before the show began they filmed a quick promo for the upcoming 10th Anniversary of the show. 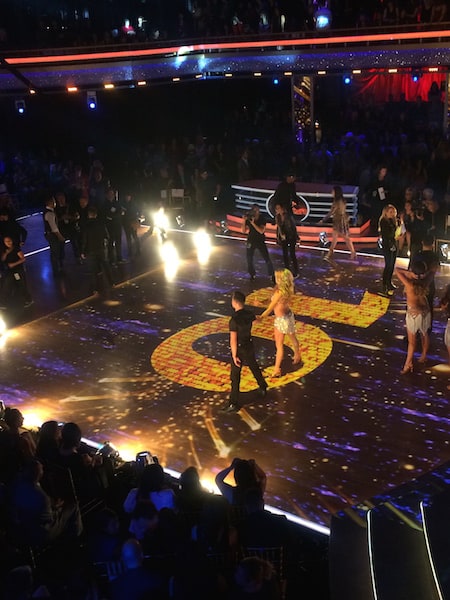 “Dancing with the Stars” paid tribute to well-known twosomes, both real and fictional, during “dynamic duo” night which aired on MONDAY, NOVEMBER 3rd on ABC. The duo dance styles included Jazz, Cha Cha, Contemporary and the Rumba. Additionally and for the first time this season, the couple with the highest overall score for the night was granted immunity from elimination. The duos who did not receive immunity then competed in a dance-off to earn extra judges’ points in an effort to increase their overall score.

If you want to watch the show you can find it on ABC.com/dancing. 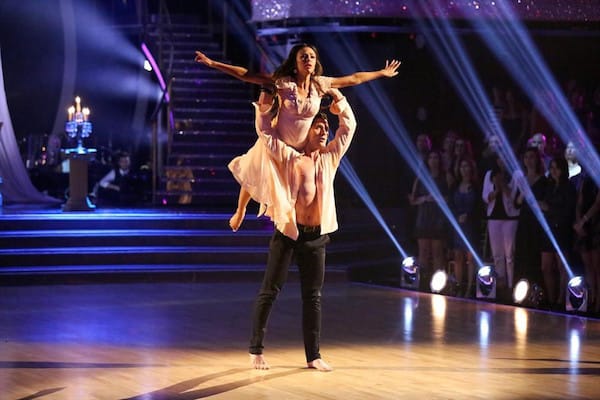 I appeared on the show a few times as I was sitting on the second row so you could see me from time to time when Erin interviewed the dancers. Can you see me next to Alfonso’s right eye?

I went to Mixology 101 in Los Angeles with my blogger group and soon the dancers started to show up. It was great to be able to sit with them while the show aired and talk about the results.

I had a really nice chat with Lea Thompson about how she wants to inspire other women to get out there and try something new. She is also back on the set and filming “Switched at Birth” with ABC Family (one of my favorite shows). 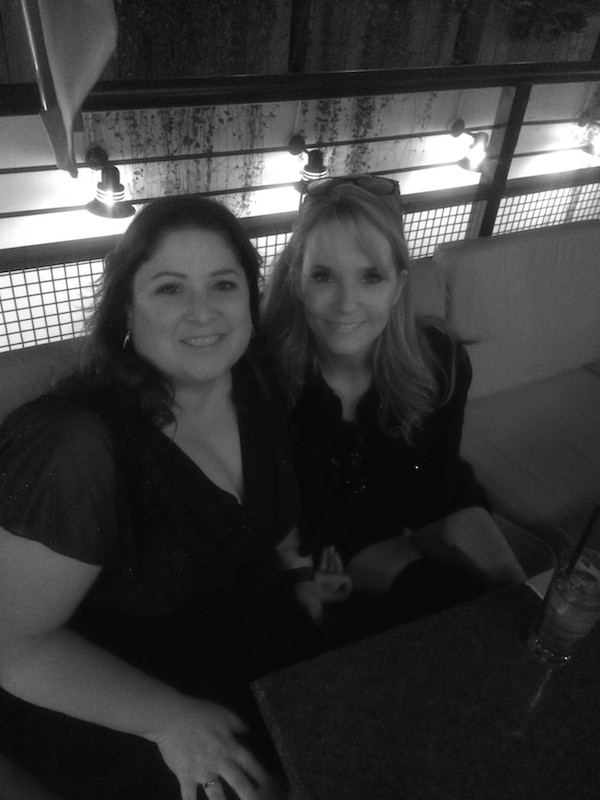 Allison Holker and I chatted about being a new dancer on the show and she told me how much she likes the energy on the show.  She also loves to do choreography and loves her freedom to be creative. 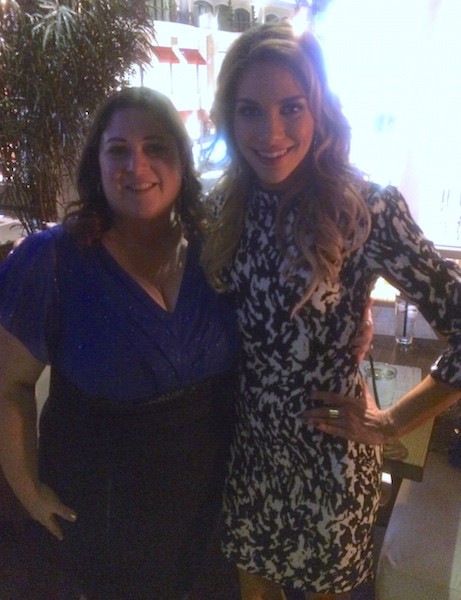 Sadie Robertson was so sweet.  I talked to her about her new book called “Live Original: How the Duck Commander Teen Keeps It Real and Stays True to Her Values.” It is a book for young girls about being true to yourself and how to be happy in life. 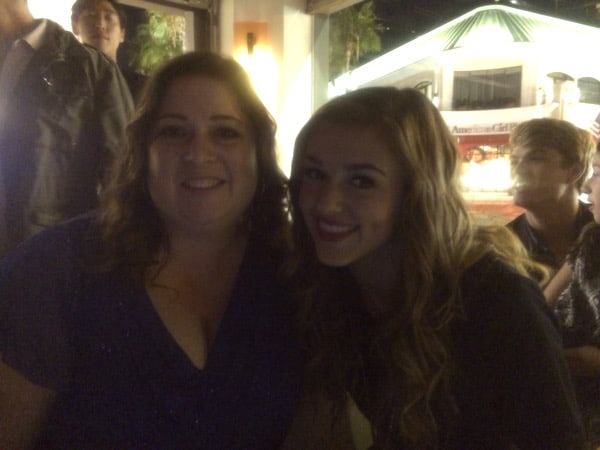 I talked to Mark Ballas about his new album called “Kicking Clouds” and he is very proud of it. 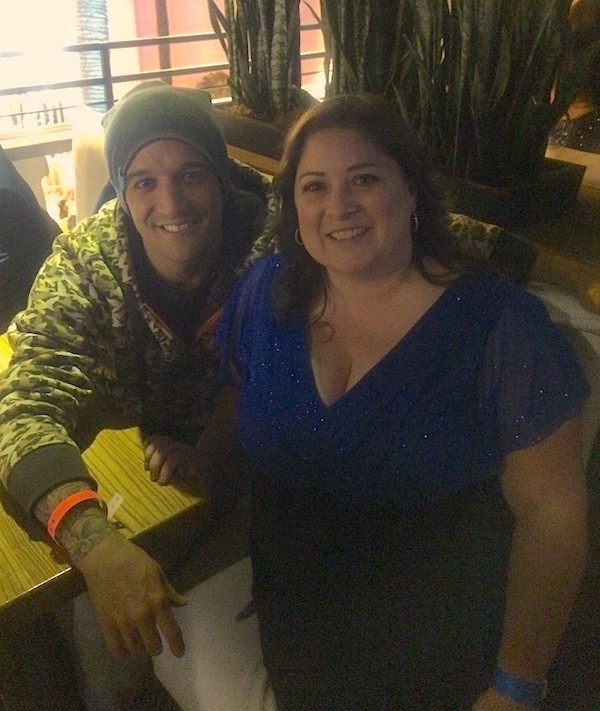 Lastly, I sat with Janel Parrish and Val Chmerkovskiy and I congratulated them on a beautiful dance and good luck on the next week’s competition.  Then Val put his arms around me….so sweet OR he was just that tired. 😉 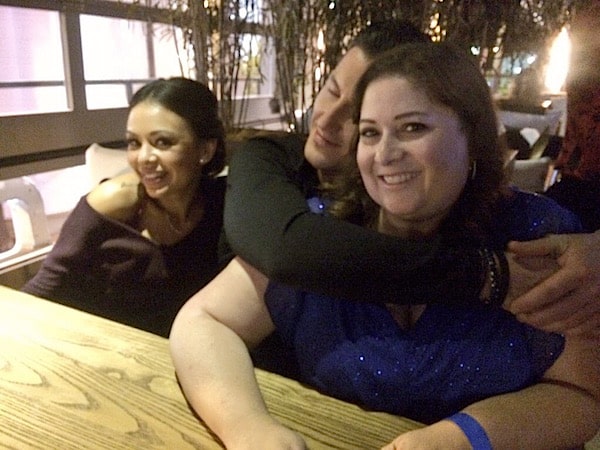 Before we left for the evening Mark Ballas took a group picture with us. 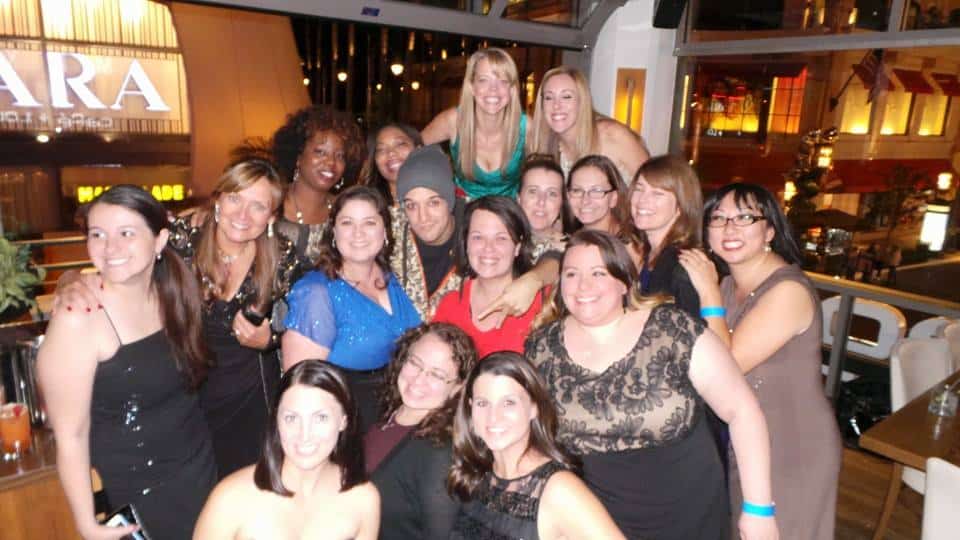 Five remaining couples advance to the Semi-Finals and perform two routines during plugged/unplugged, on “Dancing with the Stars,” MONDAY, NOVEMBER 17 (8:00-10:00 p.m. ET). The semi-finalists including Tommy Chong, Bethany Mota, Janel Parrish, Alfonso Ribeiro, and Sadie Robertson will perform to two different versions of the same song.

In the first round of the competition, the couples will perform a Jazz, Quickstep, Samba, Paso Doble or Argentine Tango to an original or “plugged” version of their selected song.

In round two of the competition, the couples will perform an Argentine Tango, Rumba, or Contemporary routine to an acoustic or “unplugged” version of that same song.

Couples will be dancing to the following “Plugged/Unplugged” songs: The Dancing with the Stars: Live! Tour

The tour will launch December 27th and run through February 15th. Tickets are on sale now at http://www.dwtstour.com/. During the official 90-minute show “Dancing with the Stars” dancers will choreograph brand new never-before-seen numbers and re-create some of the show’s most memorable moments. Mark Ballas, Witney Carson, Sasha Farber, Keo Motsepe and two-time champion Kym Johnson will be on the tour. Further announcements will be made throughout the season.

ShareTweetPinPocketMail
David Baldacci Books for Everyone in the Family – Christmas #Giveaway
Winter is here! Stay Warm With Lands’ End