I don’t know if everyone else is as familiar with all the hype around The Fault in Our Stars. I reviewed the book way back in 2012 and loved it. My daughter read it shortly thereafter, and she loved it too. It’s a young adult novel that has received tremendous success, not only in the young adult world, but as a crossover adult read as well, much like the Hunger Games. Much like that franchise, the anticipation for the movie has been huge among teens and book bloggers. I am firmly  a part of teen culture and book blogging buzz, so maybe you aren’t as familiar with it as I am. I’d actually love it if you let me know your perspective in the comment section below. Are you looking forward to this movie? Are your teens? Is this the first you’ve heard of it?

Before reading our thoughts on the interview, take a quick look at the trailer to get in the right frame of mind:

My 15 1/2 year old daughter Amanda got to participate on the call. She was prepared and quite aware of all the buzz on tumblr and twitter and amongst all the teens about the movie, and so she wanted to hear what John Green had to say about it.  He spent time on set, being there the vast majority of the time, and if he’s happy with the movie, fans should be too.

Amanda was concerned with the backlash, Because of all the hype, people who haven’t read the book were making arguments against seeing the movie. Everyone kept saying that people don’t talk like that, and they sound pretentious and weird. 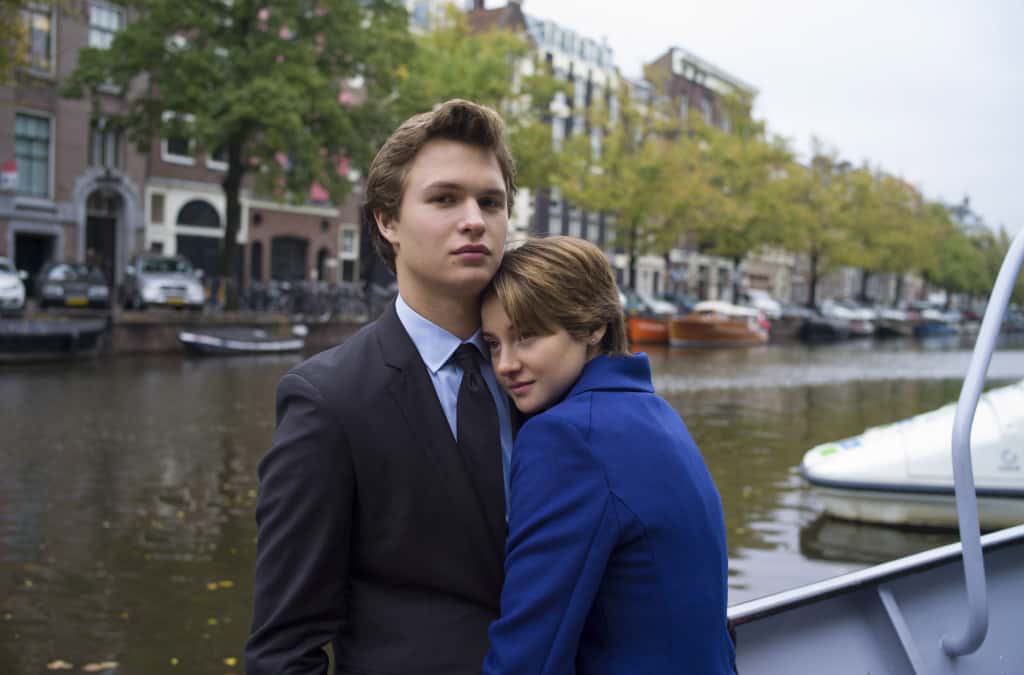 Augustus (in all his pretentious glory) and Hazel

She asked what he thought of people who had seen the trailer calling Augustus too pretentious, and she loved his answer:

Augustus is pretentious in the beginning of the book. I think Hazel calls him pretentious at one point. Isaac calls him a self-aggrandizing bastard. The other characters are aware of Gus being sort of pretentious and performative. The journey that Gus has to make is a journey from strength to weakness. I think the heroic journey that we’re accustomed to is from weakness to strength. But, Gus has to go from being this sort of performed, over the top character to being authentically himself. That means being vulnerable and that means being scared. And that’s heroic, more heroic than his sort of swagger and pretentiousness toward the beginning of the story. I think that you see that in the movie. By definition, it’s difficult to see that in a trailer.

I have to say that listening to John Green (pictured) speak, I can see that he himself could have been like these characters he writes. 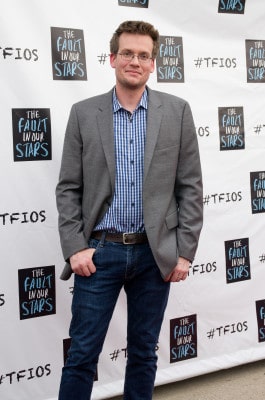 Another objection from people (probably parents and other gatekeepers) is that it romanticizes illness, and John Green addressed that issue somewhat, along with his fears of turning over his book to the hands of movie producers:

It’s really hard to make a movie that’s serious or about serious topics without sentimentalizing it. My fear was that it would become a sentimental story, which is what I most didn’t want. I was trying really hard to write as unsentimental and straightforward a story as I could. I was also worried that the characters would be defined by their disability, instead of having disability be part of their lives but not the defining feature of their lives.

The people who ended up getting the rights at Fox 2000 and the producers, Wyck Godfrey and Isaac Klausner, they just promised me that they wouldn’t do that. That was the first thing they said to me when we met, and I believed them. I took it seriously, and they kept every promise. They really did.

I asked my daughter what other interesting or surprising facts she learned during the interview, and it was yet another item that bolsters the authenticity and credibility of the story. John Green was concerned about it being accurate, so they had a stunt double who had the same leg amputation as Augustus Waters did, so Ansel Elgort (Augustus) could use the proper movements.

I’ll repeat my questions and would love to hear from you in the comments: Are you looking forward to this movie? Are your teens? Is this the first you’ve heard of it? Please read my post at 5 Minutes for Books about why this is a great movie for adults and teens.

Twentieth Century Fox invited our writer to be a part of a conference call with author John Green on a phone interview, but no other promotional consideration was given for this post.

ShareTweetPinPocketMail
20 Motivational Songs to put you in a Good Mood #Music #Playlist
Addicted to Pinterest? Join the Group and Share a Pin in #PinItFriday