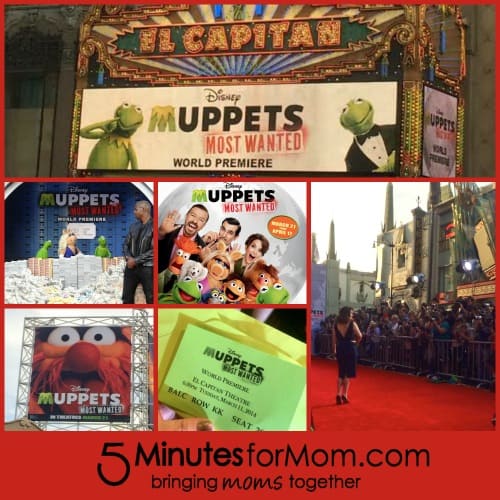 The Muppets Most Wanted movie premiered at the El Capitan theatre on Tuesday, March 11th and it was amazing step inside this historic theater. The El Capitan Theatre opened on May 3, 1926, as “Hollywood’s First Home of Spoken Drama”. It is located on Hollywood Boulevard across the street from where the Academy Awards are held at Hollywood and Highland.  I have seen this theater before from the outside and have always wanted to experience a movie inside and now I got my chance. 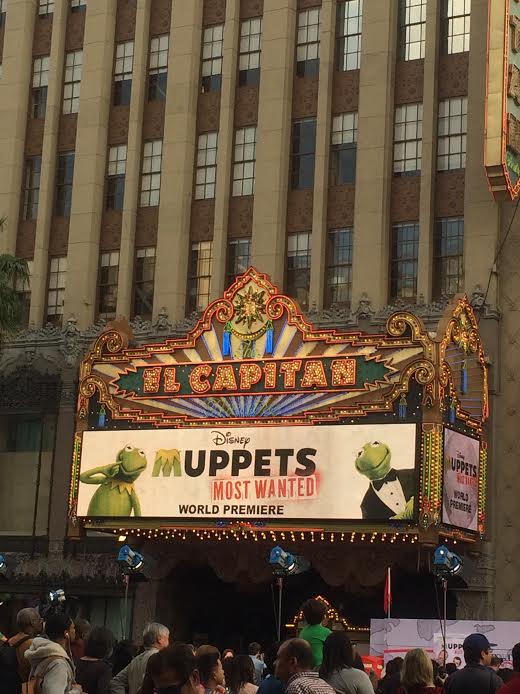 The El Capitan features a Wurlitzer with four keyboards and 37 ranks of pipes, each of which represent different musical instruments. While I waited for the movie to start I enjoyed the Disney music that was played on it.  The El Capitan is a beautiful theater and I loved how the large red curtain opened as the movie started, I felt like I was a little girl sitting in my living room watching an episode of The Muppet Show. This is the view of the screen from my seat. 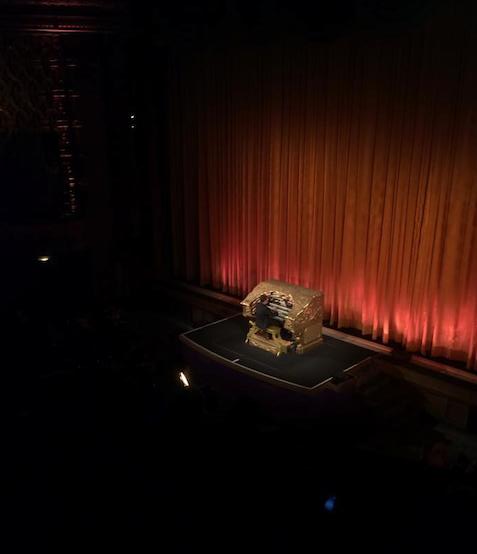 Before my group entered the theater we took a photo on the Oscar stairs.  These stairs lead up to the Kodak Theatre where the Academy Awards are held.  Can you find me? 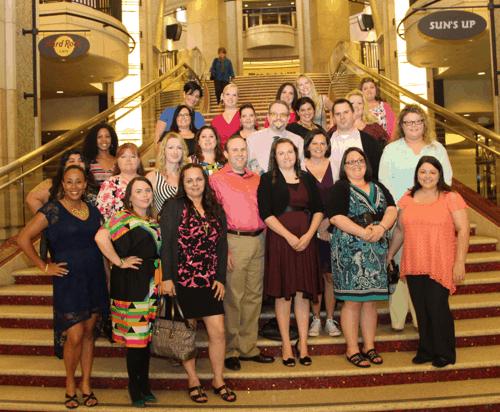 This is a view of the crowd across the street lined up waiting to get a glimpse of celebrities. 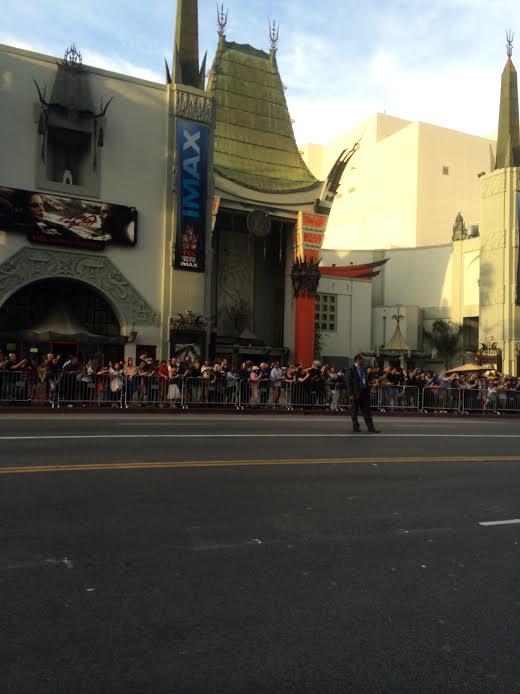 This is just before I checked in to walk the red carpet. There are fans lined up on both sides of the street behind barricades.  It is one of the most surreal experiences to be on the inside of the barricades. 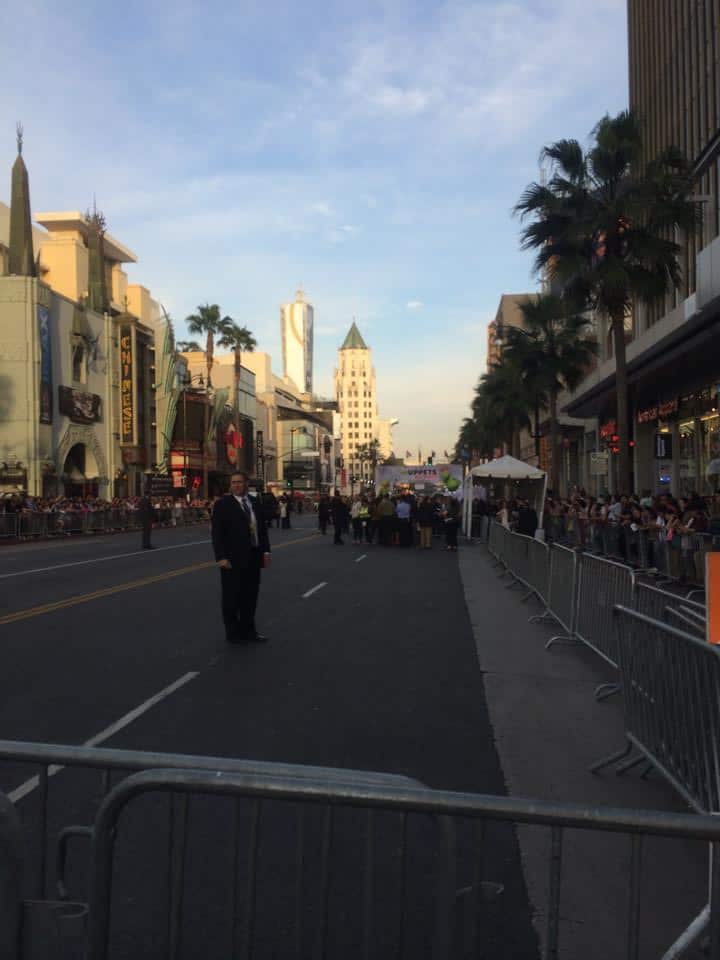 My group arrived at the red carpet when Tina Fey arrived. It was crazy to hear how all of the photographers yelled at her to turn towards them or for us to get out of the background. 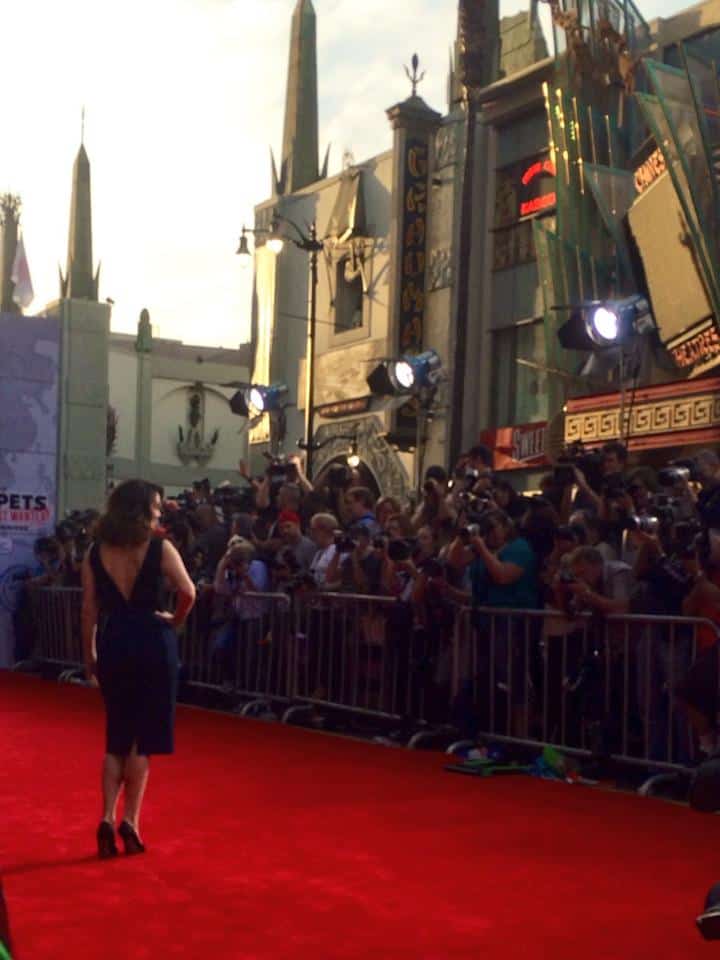 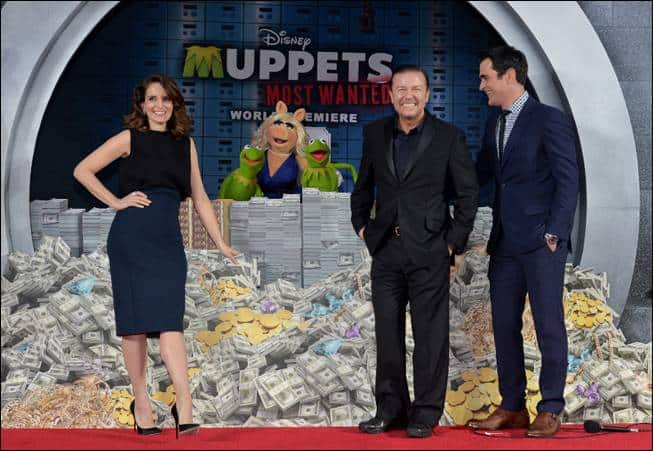 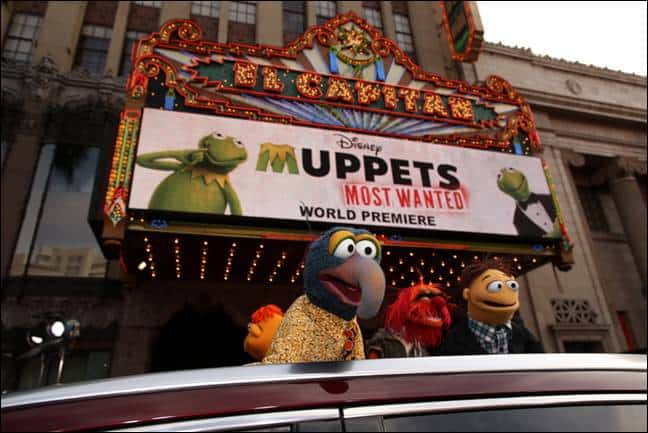 Once checked in the red carpet area it is even crazier.  There are gobs of people taking pictures, looking for celebrities and trying to make their way to the entrance of the theatre. 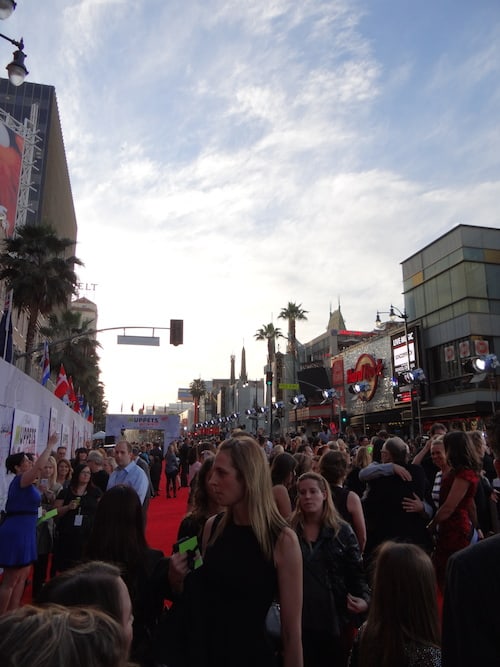 If you ever happen to find yourself on the red carpet be sure to have a photo buddy. Have them take a picture with your camera because doing selfies can sometimes be a challenge and you won’t get you entire outfit. Here is a picture of me on the red carpet. You can experience the Muppets Most Wanted at the El Capitan Theater from March 21 – April 17th.  Before the movie you can see Miss Piggy and Kermit sing on stage and after the movie you can view some of the props that were used. 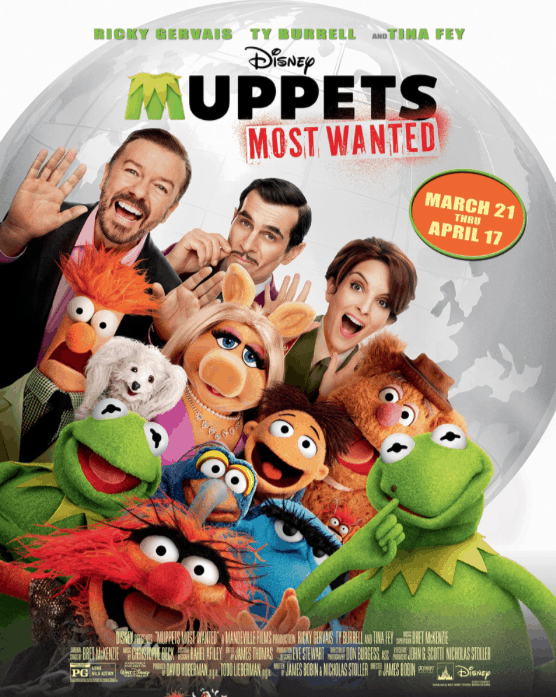 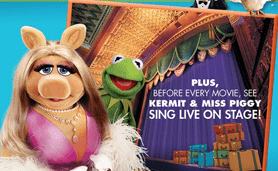 Following the Muppets Most Wanted red carpet premiere we went to the after party located across the street.

Many of the props that were used in the film are on display.  This is the tiny Interpol car that Ty Burell drives as Jean Pierre Napoleon.  I am taking a picture with some of my new blogger friends. 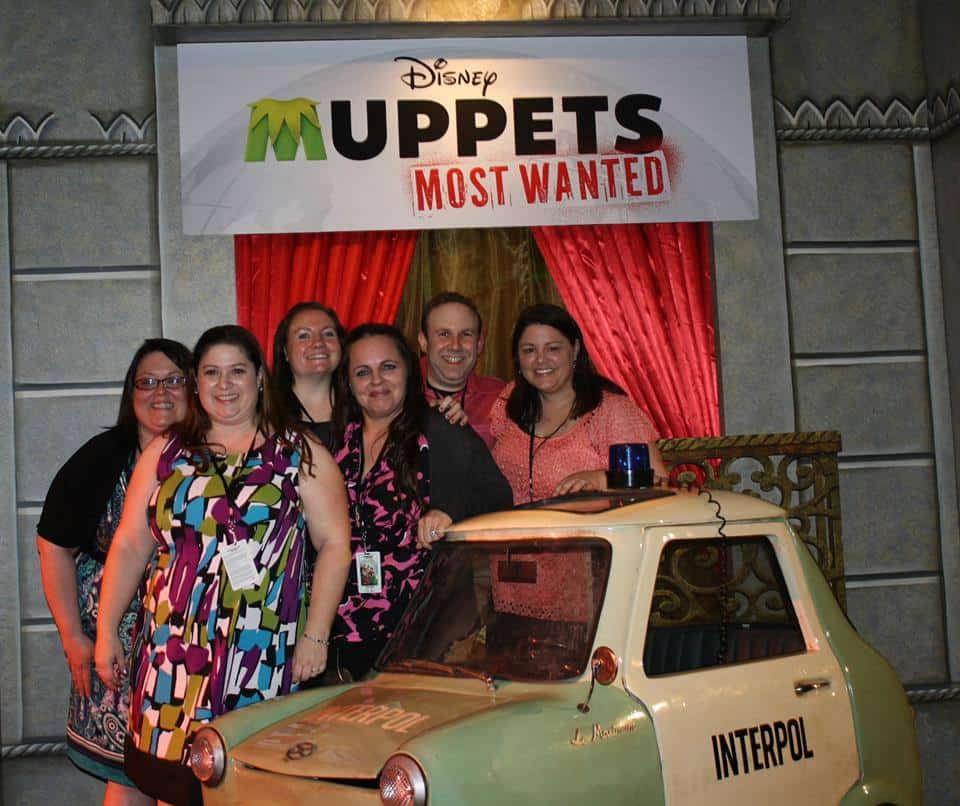 There was also no shortage of celebrities at the party.  I was standing in line to take a picture with my friends and G. Hannelius who stars as Avery on Disney Channel’s Dog with a Blog was standing behind us.  I asked her if I could take my picture with her because my girls love her show.  She was very kind and said “yes”.  I immediately sent it to my daughters and made their night. 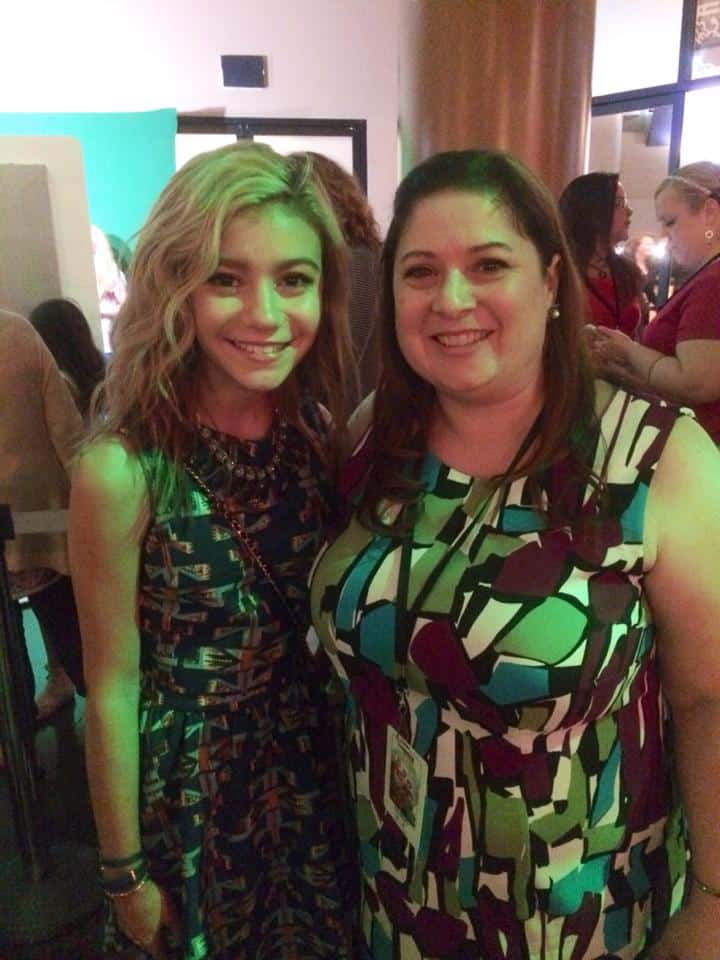 I was attempting to take a picture with these lovely bloggers with Ty Burell when someone else walked by and offered to take it for us. 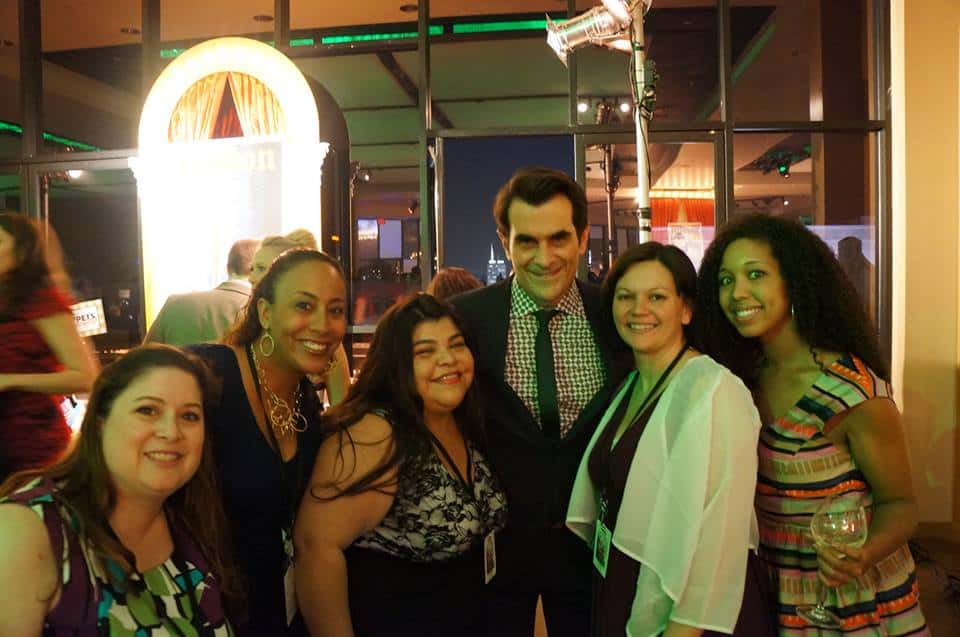 There were several food stations set up around the room serving fish & chips, roast beef, rice and sweet potatoes.  Each station featured poster art with a Muppet and a location of one of the stops on the Muppets Most Wanted World Tour. 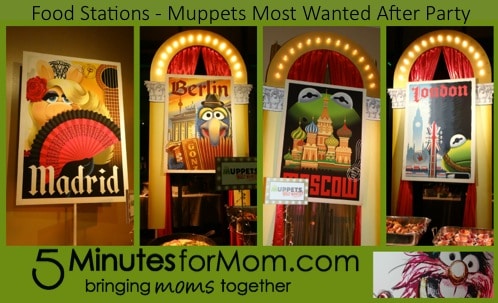 This is the bar area and the food from my plate.  The last picture is from the dessert station but I thought Walter was just so cute so I took a picture of him instead. 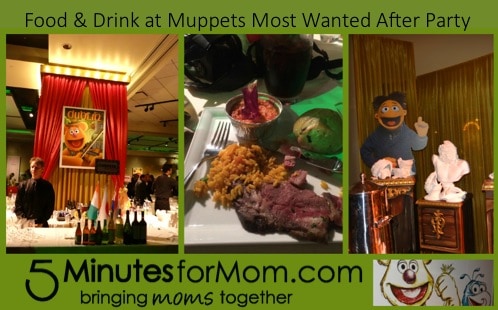 These are props that were used in the movie.  I am sure from the previews you know who’s CIA badge that is. 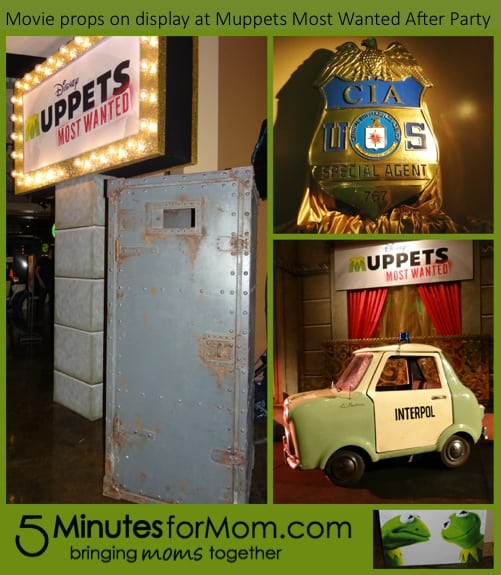 I had a wonderful time at the red carpet premiere of Muppets Most Wanted and at the after party.  It was a night I will never forget.