5 Minutes for Mom contributor Emily Thomas attended the taping of the first annual Hub Network Halloween Bash. Her expenses were covered to attend and review the event.

The first annual Hub Network Halloween Bash was the culmination of many months of costume preparation for contestants from every state and the winning prize was $25,000! 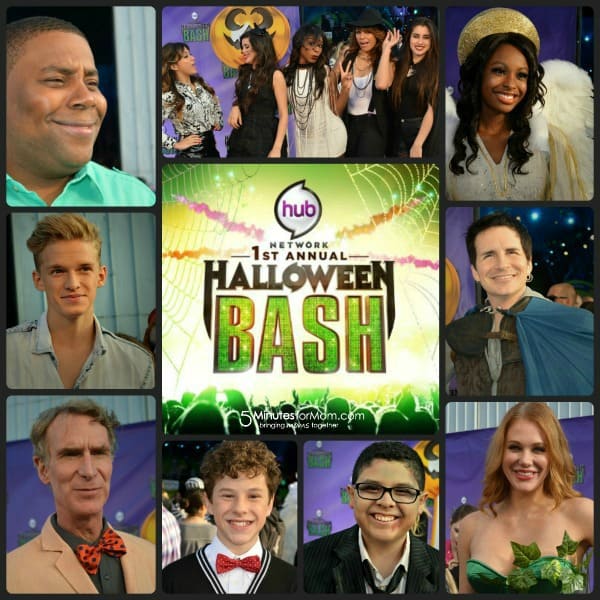 The event was well-executed and just plain-old fun. But I also greatly enjoyed this trip because I learned more about the vision behind the Hub Network and where they are aiming to take family programming.

We had brunch with Ted Biaselli, the Creative Executive with the Hub Network. He laid out with great passion his desire to create shows families WANT to watch together. His goal is for all ages to glean something both of interest and of value. This is achieved by high quality writing that engages older viewers but teaches valuable life lessons to children.

One such example is My Little Pony. This show was birthed out of Lauren Faust’s desire for a show to be on TV highlighting the way little girls are supposed to treat one another. A place they can see that everyone is a little different and that they can have meaningful friendships because of their differences.

I was also able to hear about Spooksville, premiering 10/26, in which three friends work together to solve the mystery of the curse that has been on their town for generations.

One impressive aspect to one of the main characters is that he is on the autism spectrum. I was impressed by the way the Hub Network approached this addition. They have taken great pains to ensure the character is consistent with a person with their diagnosis to ensure accuracy. More impressively, is that fact that it isn’t something that defines the character. He is an integral part of the story line and his autism is only mentioned in passing when it ties into the episode.

You can watch the star-studded bash on the Hub Network.

You will see the remarkable costumes, fashioned by contestants from each of the 50 states. There were definitely stilts involved. And smoke machines within the costumes. You have to see it to believe it. My personal favorite, since you asked, was “the last piece of toilet paper on the roll” costume. So creative. And hilarious. She was so spunky and cheerful. Gave me a whole new opinion of the solitary paper product.

It’s clear that the HUB network is doing remarkably well at raising the bar on children’s television and creating programs which draw families together. Additionally, they put on a great party. Tune in this Saturday.

Written by Emily Thomas – Believer. Writer. Encourager. Humorist. Emily writes about what happened today and what she learned from it at www.emilythomaswrites.com

Before kids she was a teacher, nurse, and world traveler. Now she mostly travels around her house picking up toys. Emily employs humor and candor to share survival tips, encouragement, and her personal motherhood misadventures in an effort to build up worn-down moms everywhere.