This past Monday, I had the opportunity to travel to New York City for the day with my two sons. While doing just about anything with a restless 7 year old and a distractable 11 year old is a challenge, I couldn’t pass up the opportunity for my boys to meet the author of one of their favorite book series: Jeff Kinney of the Diary of a Wimpy Kid. 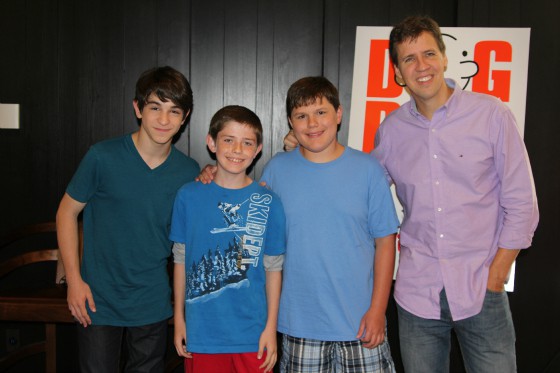 Jeff Kinney is the author of the phenomenally popular Diary of a Wimpy Kid series of books and was named one of Time magazine’s 100 Most Influential People in the World in 2009. It’s hard to believe that only four years have passed since Jeff Kinney wrote the first book in the Wimpy Kid series. Today there are 52 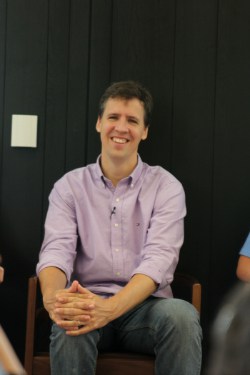 million copies in print and translations in 37 languages. Diary of a Wimpy Kid: Cabin Fever, the sixth book in the series, had a first printing of six million copies when it was published in November.

Jeff has been drawing cartoons since his college days at the University of Maryland in the 1990s. I thought it was interesting to learn that when he began writing down his initial ideas for Diary of a Wimpy Kid, he was planning on turning the comic strip type story into a book for adults. I know that thousands of children and their parents thank Mr. Kinney for shifting his focus and making it into a children’s book series. Many of the fellow parents in our blogging group on Monday had stories of children who were not interested in reading until they picked up their first Wimpy Kid book.

We had a chance to chat with Jeff Kinney for a few minutes and asked him a few questions about the history and future of the Wimpy Kid books and movies. Here’s a peek at what we talked with him about.

Jeff Kinney: “What’s next for me? More books. I’m working on another one right now for the series. I’m also really excited about making an animated TV special, a holiday special, around Wimpy Kid.

And then, I don’t know. I still have a day job, and I’m working on trying to develop another television show as well.”

How the Wimpy Kid stick figures became a live-action movie

One of the things I was most interested to ask Jeff was how he decided to make the movies with live actors versus making an animated movie with characters that resembled the classic cartoon stick figures from his books.

Jeff Kinney answered, “The conversation from the very beginning was having it be based live – as in human beings playing the characters, because the producer, Nina Jacobson, she really had the sense that people were going to be able to connect to the characters if they were people. I don’t think that you could get any depth out of my stick figure drawings or CGI, really. It was a wise move on her part.”

I have to agree. The Wimpy Kid actors (as we were able to see first hand) were perfect for portraying the characters from the books, and I could tell on my older son’s face that he could relate to the boys and their ordeals in middle school.

About Diary of a Wimpy Kid: Dog Days The Wimpy Kid movies continue with a third installment. During his summer vacation, “Wimpy Kid” Greg Heffley hatches a plan to pretend he has a job at a ritzy country club – which fails to keep him away from the season’s dog days, including embarrassing mishaps at a public pool and a camping trip that goes horribly wrong.

My 11 year old really related with Greg’s desire to spend the entire summer locked inside the house playing video games, and we all appreciated the good, clean humor. It was a perfect way to finish off our own “dog days” of summer.

Diary of a Wimpy Kid: Dog Days is in theaters TODAY, August 3, 2012. My boys and I love the movie (we laughed so much!) and I would recommend it for elementary school through middle school aged kids.

Travel and movie screening were provided, but thoughts on the movie are my own. The photo of Jeff Kinney and the group shot with my son and the Wimpy Kid crew were taken by me. You can see more about our experience in New York on my blog.

ShareTweetPinPocketMail
5 Minutes for Food: Reader Favorites in 2012
Why My Kids Will Always Be Involved in Music