Duncan likes to plan. As the founder of itpaystobeprepared.com, he loves to share his ideas for preparation with others and encourage action before an event occurs. Whether traveling or at home, he makes it a priority to keep his family safe and ready to face any situation.

A lot of people experience anxiety about what their teen driver will do if they’re stranded on the road. Breakdowns can happen anytime and they usually occur at the worst possible moment – like when you’re 20 miles out into the desert of New Mexico.

I don’t worry about my son though. I have peace of mind because he knows what he needs to do before and during an emergency, and I’ve made sure he’s prepared for anything. Like the old saying goes, “It pays to plan ahead. It wasn’t raining when Noah built the ark.”

Before He Hits the Road

My son knows the importance of proper planning – I’ve drilled it into his head enough, and he’s learned by watching my wife and I. He knows to call ahead and let someone know that he’s leaving, and he always calls to let us know when he gets to where he’s going.

He also makes sure to charge his cell phone before leaving the house and that he has a charger for the car, too. Unlike some kids, he also knows that he needs to dress for the weather – cold weather means layering up and hot weather means dressing down.

I’m also proud that he always takes the time to inspect the car before he gets on the road. It’s just a quick walk around, but it lets him check for things like:

Of course, he also double-checks the gauges before he pulls out of the driveway – he doesn’t like to take chances. 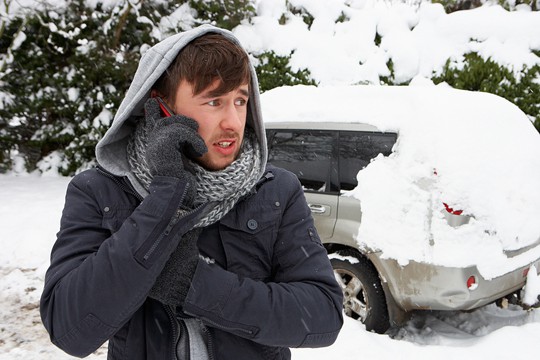 My son was with me when we broke down in a snowstorm several years back, and I like to think that experience taught him about what to do if he breaks down on his own, with help far away or unable to get to him. He knows that he needs to call for help right away – we’re the first call he makes unless it’s a serious emergency, in which case he knows to call 911.

He also knows that he shouldn’t run the car the entire time he’s stuck – assuming it’s running – cycling the engine for five minutes at a time, a couple times per hour, is plenty often to keep the car warm or cool depending on the weather conditions.

I know he’d never dream of leaving the car either, unless it was to flag down help or go to the bathroom. I made sure he knows not to play the radio or leave the headlights on while the car’s turned off, to keep the battery from draining, and that he can use the headlights to signal for help.

He Has What He Needs

I’m a stickler for safety, so I make sure a full summer or winter emergency car kit is in each vehicle. You never know when you’re going to get stuck, especially in the area where we live. My son knows that the emergency kit is there and that it has exactly what he needs to survive while he’s waiting for help to arrive. 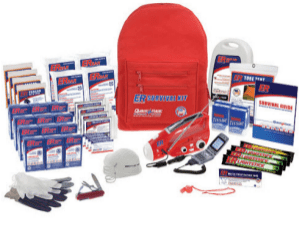 I’ve also impressed upon him the importance of double-checking the kit regularly to make sure it has fresh water, good batteries and anything else he’ll need. Our emergency kits have:

There’s a flashlight in there too, along with spare batteries. We don’t like to rely on just a flashlight though, which is why the candles and matches are in there. It’s just too easy for a bulb to break and leave you with no light at all. We live in the desert, so it gets hot during the day and cold at night. There’s a blanket or two in our emergency kit, as well as warm clothing if needed.

I’m pretty secure knowing that not only does my son have the tools he needs to stay safe in an emergency, but that he knows how to use them and exactly what to do if he finds himself stranded in the middle of nowhere. 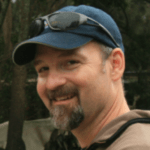 Duncan Morrison has considerable experience in assessing the potential for disaster, as well as planning effectively for it. He has survived a plane crash, a tornado, more than 40 years of bitter winters and a tsunami evacuation. He likes to provide quality information to readers by writing about emergency preparedness and how to use an auto or an emergency kit for home to keep safe at all times. In his spare time, he enjoys spending time with family and friends, working out and walking his dog, Sammy – the “best dog EVER”.

Snow break down picture from BigStockPhoto.com.

ShareTweetPinPocketMail
The Day My Husband’s Life Turned Around
Want Us To Follow You On StumbleUpon?