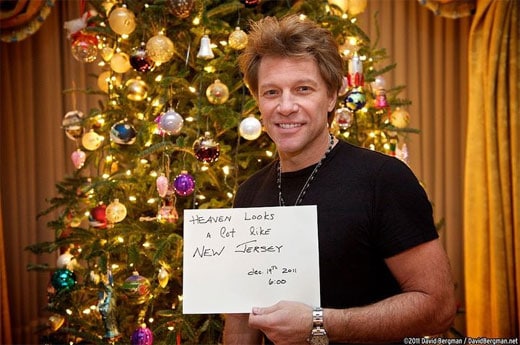 I missed the mourning.

Today, while I worked and stayed off Twitter, thousands of Jon Bon Jovi fans were weeping over the news that Jon Bon Jovi was dead in New Jersey, as falsely reported by dailynewbloginternational. I didn’t catch news of it on Facebook until Jon was proven “alive.”

With the power of Twitter and Facebook, the death hoax whipped through the Internet, prompting the Bon Jovi camp to release a photo of Jon assuring his fans that all was well in New Jersey.

Now, it is a smiling Jon Bon Jovi and a good-natured, “Heaven looks a lot like New Jersey,” printed on a piece of paper, complete with date and time, December 19, 2011, 6:00, that is swirling around online, calming the storm and yes — keeping Bon Jovi trending.

Death hoaxes on Twitter are becoming common, with a hashtag all their own, #TodayTwitterKilled.

The constant stream of celebrity death hoaxing is helped out by a hoax site, Global Associated News. Pardon me for not linking. If you want to check it out, it is globalassociatednews.com…

Written by Janice Croze, co-founder of 5 Minutes for Mom.