5 Minutes for Mom contributing writer Kelli weighs in on the discipline dilemma. Parenting is a tough job! 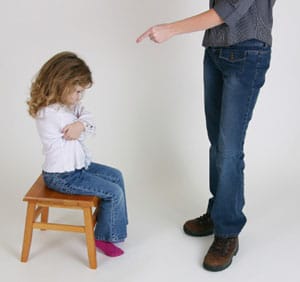 It was a crisp autumn afternoon and I sat at the park watching my children play happily. It was calm, quiet, peaceful. Until…

“Sam,” the Mom one picnic table over squawked. “It’s time to go. Come get your shoes on.”

Of course little Sam did not comply. Putting on your shoes isn’t nearly as fun as sailing across a stormy sea in a rickety plastic pirate ship.

“Sam,” she called again, the decibel of her voice beginning to pierce my ear drums painfully. “Mommy said come here right. now.” I watched in amusement as Sam continued to play, tossing his Mom a slight glance. He heard her, but the temptation to ignore was just so strong.

At this point, most of the park has slowed to see what exactly will happen to little Sam should he choose to ignore his mother’s obvious warning. “Oooooone,” she counted, her voice going from low to high. “Twooooooo.” I looked at Sam who was clearly unaffected by the ominous counting. “Two and a haaaaaaalf. Two and three quuaaarterrrrrsssssssss.”

The playground grew quiet. What would happen to Sam?

The mother stopped and sighed, then shrugged her shoulders, picked up little Sam’s shoes and walked over to him. He happily hopped off the pirate ship and skipped to the car, barefooted and victorious.

There is no question that raising children is hard. Nobody really warns you about how hard it actually is when you have them. They prepare you plenty for the sleepless nights and challenges of newborns, but nobody tells you that after they grow out of the newborn phase and you survive the crazy toddler years the real parenting sets in.

From my limited experience as a parent to three squirrelly kids, I have noticed five traps that we can easily fall into as parents and whether our children are very young, or whether they are teenagers, these traps are always waiting to ensnare us on our road to raising productive adults with all our hair in tact.

1.) The Talker – A parent who is a Talker tries to explain every little thing to their children. I am a firm believer in giving our children the “Why’s” for our rules. I don’t believe in enforcing arbitrary rules. If a restriction is placed upon me, I want to know the reason for it and I think our children deserve the same courtesy.

2.) The Threatener – Like the mother at the park, a parent who constantly threatens and never follows through is about as effective as a seatbelt without a latch. As a general rule of thumb, I find the 1, 2, 3 technique to be terribly ineffective. Kids see right through it. When you start to count, children as young as one know that all they need to do is wait until you get to the dreaded two and three quarters before they even need to think about reacting. And if you don’t follow through on your threatened punishment, counting to three is laughable at best.

Children crave the security of rules. They thrive when they have clear boundaries and in order to set those, you need to set clear consequences. Threatening a consequence and not following through will only confuse young children.

3.)The Yeller – Again, our kids are freakishly smart little beings. They figure out pretty quickly how to push the envelope and how far they can take it before anything happens in Mom-Land. If you are a yeller, your children will likely learn to tune you out, just as they tune out The Talker parent. I understand this, as I can easily fall prey to becoming a Yeller. This stems, for the most part, from my unwillingness to deal with an issue immediately.

In other words – I’m lazy. I wait until things are out of control before I blow, which always results in my apologizing to the kids. As they’ve gotten older, I’ve gotten a much better grasp on how to quickly and swiftly deal with behavioral problems before they escalate to the point of total exasperation and frustration. It’s made for a much more peaceful household.

4.) The Huffer – This parent could also be identified as The Sigher or The Eyeroller. This parent communicates her frustration by outwardly and visibly showing her annoyance and frustration. The problem with this sort of technique is that it’s completely passive aggressive. The kids know Mom is upset, most of the time they know why, and they may or may not be inclined to do something about it. If they’re very young, or they have a sensitive type of spirit, they may try and stop whatever behavior caused the obvious frustration, but as they get older they will likely grow desensitized to your frustration and will simply blow right past with out fear of recourse.

5.) The Authoritarian – The Authoritative Parent is likely to establish a lot of rules and a strict punishment if the rules are followed. This parent will usually get the resulted behavior and obedience, but the danger in this style of parenting is that your children will learn to obey only to keep you off their backs, not because they have a desire to do the right thing. Arbitrary rules without explanation and strict punishments that don’t necessarily fit the crime have the true potential to create bitter children.

As parents, we all want to do what is right and best for our children, including teaching them how to be controlled and respectful citizens. A balanced approach to teaching, loving and modeling those qualities is key. Getting down on their level and explaining why we want them to obey and what result we expect to see gives them a sense of ownership over their own behavior. Predictable consequences give them the healthy and secure boundaries they need to figure out how life works. Positive reinforcement and praise help our children take pride in who they are and their achievements.

It’s never easy, but if we’re willing to continually work on ourselves and how we parent we can truly have a positive effect on who our children become as adults.

Written by Kelli Stuart, a 5 Minutes for Mom contributor and stay at home mom of three kids. She blogs at Minivans Are Hot.