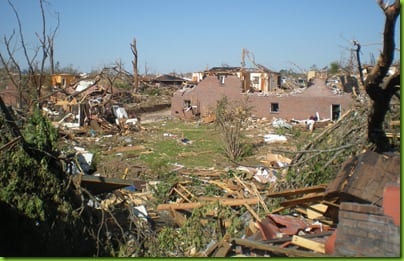 But they happen so often that we typically don’t worry too much about them. I remember standing in front of my office building’s double glass doors 10 years ago, tornado sirens blaring from the school behind our building, just watching a pre-tornado storm coming down our street. They’re quite simply commonplace.

But there was something different about the storms of April 27th. The weather was so wretchedly perfect for a horrific event that our meteorologists began sending out dire warnings two days beforehand.

Although even the biggest tornado cynics (like myself) felt a sense of dread about the coming storm, none of us really had any idea that our lives would literally never be the same.

The predictions told us to be ready to run to our place of safety anytime between noon and midnight. But in a sadistic twist of fate, nature started it’s attack at 6am – before most of us were awake enough to hear the tornado sirens. I was awakened to the sound of a gigantic branch crashing all the way through our porch roof right outside my bedroom window. Many others were awakened by much worse. This early morning warning signal knocked out power for hundreds of thousands, crippling us from being able to be completely prepared for the incomparably worse weather coming later that night.

It was as if the sky itself was taunting us with it was about to throw at us.

And then, the sun came out. The atmosphere warmed to even more dangerous levels, thereby creating a deadly environment. As we all waited, every second became maddeningly more dread-filled of what would become the worst tornadic event of our lifetimes.

The tornadoes started rolling through in the early afternoon, and began to reach our area by evening. My family of four retreated to our basement for hours, my husband and I scared out of our minds but trying not to show it, my four year old daughter playing, reading, and blissfully unaware, and my four month old baby doing what he always did – eating, then napping, then eating, then napping. We listened to our radio and desperately tried to get cell phone service to find out what was happening to our world through social media, and especially to call our family to find out if they were okay.

And, as we were safely stowed away in our basement, we listened to our radio with horror as the reports of multiple tornadoes, unimaginably powerful, tore through our state like a tiger’s claws, shredding houses all the way through their “safe” basements – mere miles away from us. 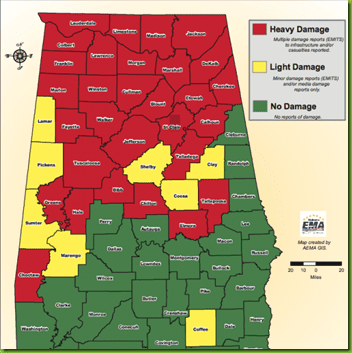 It was, for so many, quite literally unsurvivable.

As we began to be able to access more of the outside world, the devastation was heartbreaking. Still without power, I relied on Twitter.

One tweet was the picture of a seven week old baby, with the accompanying tweet that his parents were desperately trying to find him, begging for any information on his whereabouts.

Another – a child that had somehow made it to the Children’s Hospital but had died after arriving, but with no identity known or any idea if her parents were alive or dead.

These storms ripped apart families, forever altering the course of thousands. Yet my family was spared – how could I not immediately take on the urgent mission to do whatever I could to help those families that could have so easily been my own?

This video shows a tiny sampling of what hundreds of miles of my state now look like:

If you too have been wanting to do something for these families but didn’t know what you could do, I’d like to offer you two ways to make a difference:

1. Sometimes it feels impersonal and even dangerous to just give money to disasters. But thanks to today’s technology, there are other options. Another local blogger worked with one of our awesomely hard-at-work local charities, the Christian Service Mission, and set up an Amazon Wish List – these are items of all kinds (food, toiletries, clothing) that are desperately needed for those families who have lost everything. All you have to do is purchase items from this wish list, and they’ll be shipped directly to the mission, who will immediately deliver them to the dozens of communities that have been devastated by these tornadoes.

2. I have heard so many heartbreaking stories of families in the smaller communities who have lost everything – no houses, no cars, no power, no phones – but have yet to receive help. Although according to FEMA our state has done more in a week than happened in 6 months after Hurricane Katrina, helping the hundreds of miles of towns that these tornadoes devastated is an overwhelming task. What especially burdens my heart are the babies in these towns – they have no formula, no food, no diapers – and the parents that are certainly in misery while watching their children suffer. So I have set up a Paypal fund – Mommies helping Mommies – that will go directly to buying formula, food, and diapers for these families. I will personally deliver the items to these communities. There is no overhead cost (I’m personally paying the Paypal fees), no agency, no expenses – just a desperate attempt to keep further tragedy from happening as a result of these storms.

And of course, your prayers are especially appreciated as we start this long journey to recovery.