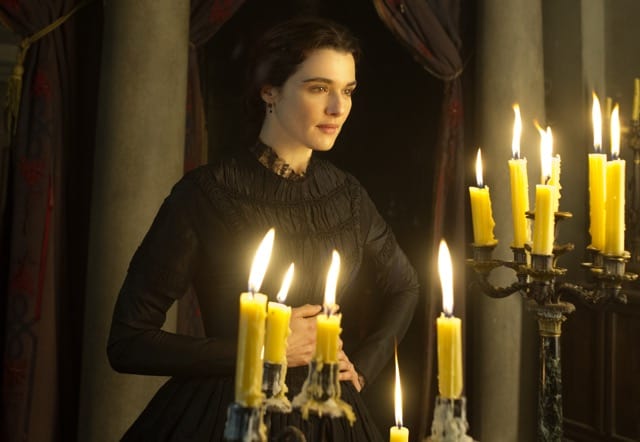 Summer season is upon us. Amongst the noise and clamor of the summer blockbusters, the superheroes and the comedy duos, comes a quieter film, a dark gothic drama that will linger in your mind long after, leaving you with a sense of disquiet, uneasy in your mind. Did she or didn’t she?, asks the narrator, but the film does not answer.

Gorgeously filmed to showcase the sweeping vistas of the Cornish coast, My Cousin Rachel tells the story of a young man and his cousin’s widow through the eyes of the unreliable narrator Philip Ashley. Orphaned at a young age, Philip is raised by his cousin Ambrose in an all-male household. (Sam Claflin plays both the adult Philip and Ambrose) Ambrose travels to Italy for his health, where he falls in love with a distant cousin, Rachel. Soon, however, he is writing paranoid letters calling her his “torment” to his young protege. When Philip arrives in Florence, Ambrose is already dead and Rachel has left. The doctors speak of a brain disease which caused paranoia, but Philip doesn’t trust these foreigners.

When Rachel arrives in England at her late husband’s estate, Philip is prepared to dislike her and make her suffer. However, he soon falls for her charms. He is young and callow, and completely unprepared for a womanly influence, and Rachel is in turns goddess, temptress, mother, witch, and more. We see her almost entirely through his eyes, but at the same time we see Rachel herself as intelligent and charming.

My Cousin Rachel is atmospheric and lovely on the surface, but it gets beneath your skin and leaves you wondering, as the narrator asks: Did she or didn’t she? Is she a poisoner, or just a woman fond of herbal remedies? Did she torture Ambrose, or was it his brain tumor all along? Did she poison Philip after first leading him on, or was his fever a coincidence? Is she a powerful and malignant woman in control, or simply a woman in a man’s world, needing some protection, looking for a place to call her own? Rachel Weisz does a superlative job capturing the enigmatic nature of the title character, and Sam Claflin is perfect as the unreliable narrator who is at times starstruck by her and at times angry and suspicious. My husband and I both really enjoyed the film, and spent the next several hours arguing about our differing conclusions! 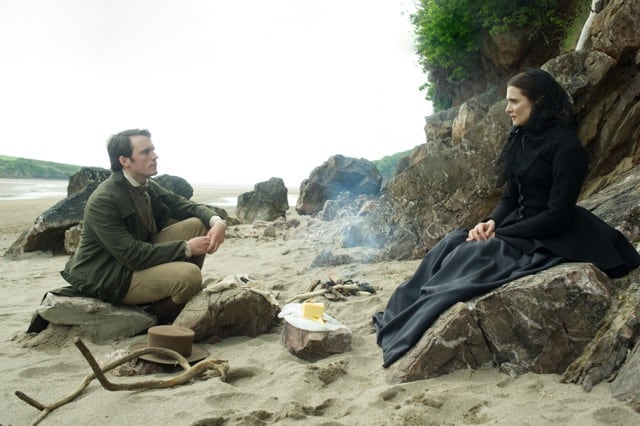 I had a chance to participate in a conference call with actress Rachel Weisz and several other bloggers, which I really enjoyed. She comes across as personable and friendly, and it is now my fondest wish to get to sit next to her on a long transatlantic flight! Below are some of the questions and her answers, edited for space and clarity.

Did you decide in your own mind whether Rachel was guilty of poisoning Ambrose and Philip, or did you keep it open-ended so as to be able to play the role more ambiguously?

RW: No, I did decide as to whether she was guilty or innocent.  But I kept it secret from the director, he didn’t want to know if I was one way or the other.  But yes, I did make a definitive decision.

And what did you decide?

What is it that drew you to the script initially, and what did you find most compelling about the story?

RW: I liked the tale of obsession, this dark obsession, the thriller aspect, the kind of gothic atmosphere, the mystery, the tale of infatuation, the kind of did she or didn’t she element, that it was a complex character, she had lots of contradictions and couldn’t be pinned down, the fact that, it seems to have turned out that audiences are arguing about her innocence or guilt, which I think is really interesting.

Given all the mystery surrounding the character’s motive, first of all, who is Rachel to you and what qualities or traits would you say that you might share in common with the character and maybe where you differ?

RW: Well I guess how you see her, I mean it depends on whether she’s guilty or innocent.  But if she’s innocent then, I mean either which way, I think she’s pretty independent, free-spirited, funny, provocative, mischievous, feminist, romantic, motherly, tender, angry.  How’s that?

Did you read the book as part of your preparation for your role?  Were you already a fan of the author?  Do you enjoy doing book adaptations?

RW: I haven’t read any (other books) by Du Maurier even though she’s a very celebrated British writer. But I did read the novel in preparation for the film and I think (director) Roger (Michell) did a fabulous adaptation… I think this is a more modern, edgy take on the film classic.  The novel definitely has those elements in it.  She’s a pretty radical character.

The great thing about a book is that everyone imagines the book differently so it’s not like a performance which is put down in a concrete way that you could just be haunted by, disturbed by when you’re trying to make your own version. A book is open to interpretation and your own personal fantasy.  So yes, I always read the books.  They’re always great.  Lots of food for thought.

Are you a “Game of Thrones” fan, and did you try to get any secrets out of Ian of the upcoming season?

RW:  I’m not actually.  I haven’t watched enough of Game of Thrones to talk about it intelligently.  I know it’s a great series and there are avid fans out there so I wouldn’t want to compete with them.  But I know my horse had been trained on Game of Thrones so my horse would have some secrets to tell.

Thanks to Fox Searchlight for setting up the interview and film screening, and to Rachel Weisz for her time.