In Strange Magic the fairies and elves from Fairy Kingdom and the curious creatures of the Dark Forest collide in an epic fairy tale adventure about love like no other.

It’s a madcap musical with a princess who has sworn off love, a vulnerable villain, a slightly nutty Sugar Plum Fairy, a tenacious and big-hearted elf, a mischievous imp, and a knight who is no Prince Charming. 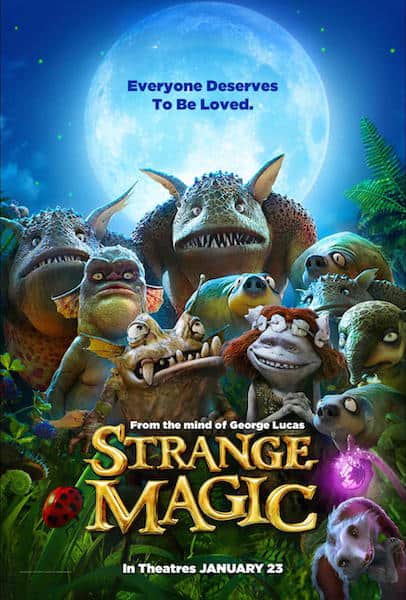 1. Strange Magic is unlike any animated movie you’ve seen before.

The animation is so detailed and it looks amazing. It feels so lifelike you will swear that these creatures are living in the grass and bushes right in your backyard.

2. The musical performances of the cast are fantastic.

3. The message of the movie will touch your heart.

Strange Magic comes from the mind of George Lucas and with his new movie you can go on an adventure and see how his characters fight for what they love. The message in Strange Magic is that everyone deserves to be loved and that being different is not weird, it’s special.

4. You are going to want to get up and dance.
There a good amount of music in the film — 25 songs to be exact — and each song helps move the storyline along.

The music selections in the film are a good mix of love songs and they made me want to get up and dance. I don’t want to spoil it for you and tell you the songs that are included but they span six decades and are a variety of musical styles.

5. Strange Magic is perfect for the entire family.

It is perfect for the whole family because there is music, adventure, and a love story involving two kingdoms that are as different as night and day — the Fairy Kingdom and the Dark Forest.

It is a must see movie and I highly recommend it.

There is something for everyone in Strange Magic opening on January 23rd!