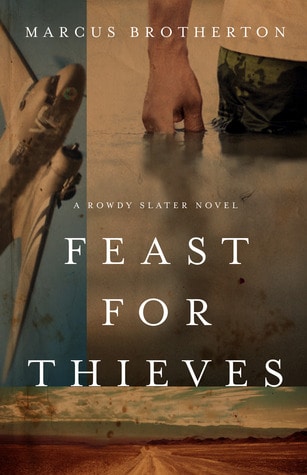 Rowdy Slater was the most incorrigible paratrooper in the 101st Airborne division during WW2, which meant that not only was he awarded for bravery but he also was rewarded for busting in a guy’s head during a bar fight with time in a military prison. Once out of prison, work wasn’t readily available, so he drifted into robbing banks. Hardly the kind of man a pastoral committee is looking for to lead a church. But when he robs the bank in the tiny town of Cut Eye, Texas and experiences a change of heart that leads him to return the money, that’s exactly the bargain the sheriff offers him–pastor the church for a year, or go to jail right then and there.

starts off with a bang and it continues with non-stop action. Rowdy preaches his first sermon (I won’t spoil it by telling you what he says, but it’s pretty funny and earns him a slap in the face from an elderly parishioner), fights some more brawls to persuade men to come to church, and begins to learn what it means to pastor a church full of broken and hurting people. He also gets to know the sheriff’s daughter, an attractive and willowy young woman who believes God’s calling her to Haiti and who’s been filling the pulpit while the men were at war. And, of course, his past won’t go easily to rest, and returns to haunt him with a vengeance–that is, the part of his past called Crazy Ake and his various convoluted plans to recover the money Rowdy returned, whether Rowdy survives the attempt or not.

is a title with many layers. When Rowdy has his change-of-heart experience, he hears a voice telling him to find a good meal and eat his full. That good meal is not just physical but it’s spiritual, nourishing body and soul. Throughout the book, Rowdy is fed physically by Augusta Wayman at the local diner, an excellent cook who lost her only son in the war and nearly lost her husband to grief. The descriptions of the food will make your stomach rumble. He’s fed spiritually by Reverend Bobby (the sheriff’s daughter mentioned above) as well as by his own growing awareness of God and what he learns through his own study.

This is a book that defies easy categorization–it’s definitely Christian fiction but is relevant for anyone, it’s a western of sorts, it’s got a smidge of romance, it’s fast-paced and somewhat of a thriller in that sense, and in a sense, it’s almost a coming-of-age book. However, in spite of all these genres, it is at heart realistic, literary fiction, about real people and the real problems they face. Rowdy is a likable character, a down-to-earth and humble guy who grows and changes throughout the book. His voice is humorous and appealing, adding to the charm. There were times I chuckled at his turn of phrase, and other times I was sobered at grief portrayed and broken lives beginning to mend.

As such, it’s a book that will appeal to many different kinds of people. I loved it, and my teenage sons are both anxious to finish it as well (but I had a deadline, which meant going into their room one night to snatch it back). It’s the sort of novel that men and women, teens and adults, Republicans and Democrats can enjoy. Author Marcus Brotherton has written extensively about the men who fought in WW2, but this is his first foray into fiction. I thoroughly enjoyed it, and highly recommend it.

I’m thrilled to announce that one of you can win a copy of your own from the publisher. Just follow the directions in the widget below and answer the question: If you had a choice between being a preacher for a year and going to jail, which would you choose?

ShareTweetPinPocketMail
Around the Blogosphere – Add YOUR Giveaway Link #Giveaways
Have You Seen The Best Back-To-School YouTube Video?