Staff 5 Minutes for Books reviewer Elizabeth is here to share her thoughts on a new book that hits close to home. She received a copy of the book to facilitate her review. 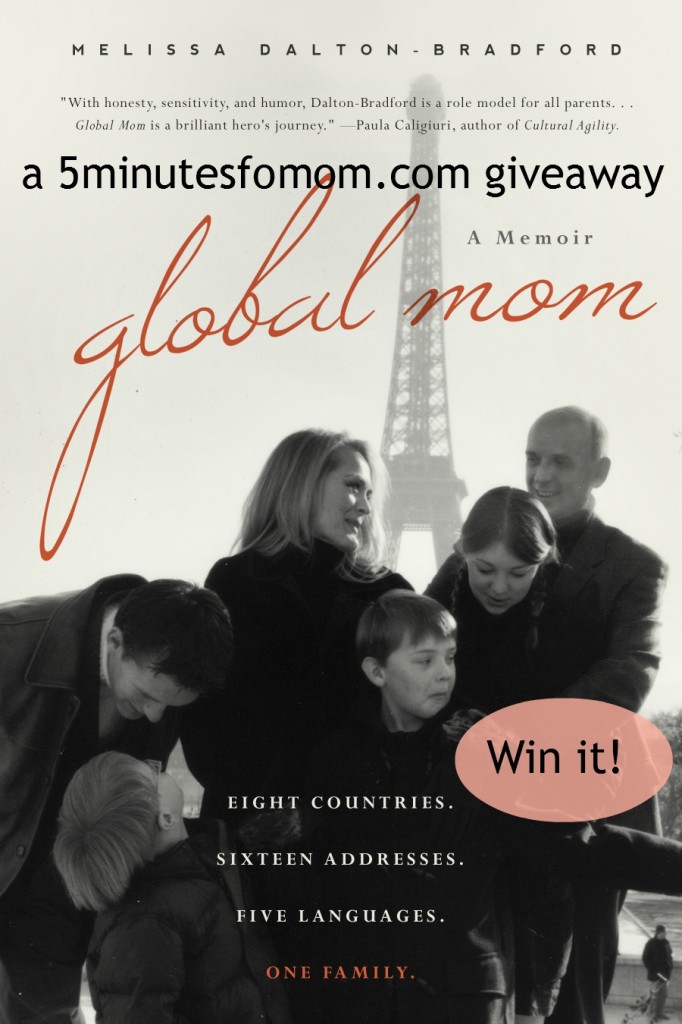 When I was pregnant with twins and had a toddler still under two, my husband and I made a very big decision–to move our family overseas. We went to a place called Mauritania to work with a humanitarian organization in the area of education, and it completely changed our lives and the lives of our children–who were 4 and 5 by the time we actually left. Our family has only lived in 4 countries, although we might rival Global Mom author Melissa Dalton-Bradford for number of addresses. Reading this book plunged me so deeply into my own memories that in some ways, it’s difficult to have the distance to review it. However, although our lives are similar in many ways, they differ in many others.

One thing I loved and admired about this family was how deeply they were able to integrate themselves, again and again, into local culture. This takes a lot of effort, I know, but since we shared a similar goal in our family, I really appreciated their level of success. I groaned in sympathy as Melissa crouched down to learn vocabulary from her young children’s friends, who suspected her of lacking intelligence. I laughed inwardly (with her, not at her) as she began to deal with the incredible amazing amounts of paperwork needed to do anything in France. And I wept with her as she entered a new land where she never wanted to go–the land of grief and loss, after the death of their oldest son in a water accident when he was just 18 and starting college. (Given that’s the exact age of my oldest, that one hit me hard. I have lost both my parents so I know parts of this landscape, but I’m thankful that I couldn’t relate beyond that).

Global Mom is ordered around a table, a langbord or long farm table. When the family lived in Norway, they selected a live pine and had it custom made for them, and it comes to tell the stories of their lives. (We have a chair like this in our family) The book opens with the comic efforts of a group of French workmen to get this enormous 12-seater into an upper-floor Parisian apartment window with a pulley system, and throughout the book the table plays a starring role in family life, from gatherings of friends for impromptu evenings, to homework sessions in new languages, to the author sitting at her laptop writing the book in my hands.

Melissa and her husband Randall took their 2 toddlers first to Norway, where they encountered a country of punishing cold and people that planned their lives around the weather. Melissa plunges in with both feet (after a few days spent hiding out and watching), putting her toddlers in a barnepark, a sort of preschool that mostly involved letting children play outside in sub-freezing weather in a sort of free-for-all. 5 years later they moved to France, where her two oldest went to an American school and her toddler, born in Norway, began learning the joys of French school life, from the manners expected during 4-course lunches at the resto scolaire, to the exacting penmanship expected of 4 year olds. After a year in the US, during which time they bought and renovated a house, it was back to France–this time to Paris, with a new toddler in tow (he was born in France the first time round). After Paris it was Munich for 2 years, then Singapore, then Switzerland, where the book ends but who knows where the family has ended up by now?

The reason for their many moves is Randall’s job, which also has him traveling for months out of the year, leaving Melissa on her own to deal with culture shock and joys. The calls for a new job often seem to come in October, so several times Randall moves and then the family follows him the next summer.

Global Mom gives us real glimpses in how other cultures approach life, whether that be through her son’s participation in a Norwegian parade, where the King and Queen waved at him, which sparked a discussion on what it means to be Norwegian and one’s view of oneself as a part of a larger whole; or her discussion with other French mothers on topics such as beauty or natural childbirth or the kind and colour of shoes one’s toddler should be allowed to wear to matranelle; or her realization after being confronted with real poverty in East Asia that to be white and speak English is to have superpower, yet to feel a real connection and sisterhood with the poorest of the poor.

Melissa Dalton-Bradford is a thoughtful, intelligent writer, and I think that you can enjoy her book regardless of whether or not your life has included more than its fair share of new tongues and an abundance of cardboard boxes. And if it has, if like me you understand exactly how much a new place can become home and simultaneously feel joy and pain at the thought of another move, you’re going to love this one.

One of you will win a copy of this book. Just use the rafflecopter below, starting off by leaving a comment telling us “Have you ever lived overseas? Would you want to?”