This is a sponsored post for Oz the Great and Powerful written by 5M4M Contributor Geri Chase.  While Geri was compensated for this promotional post, her opinions and views are her own.

When I was a kid, one of my favorite memories was watching the original version of The Wizard of Oz with my grandmother. For the time, the movie was a technological wonder! That was a long time ago and movie making technology has made major leaps forward when it comes to special effects!

My boys liked The Wizard of Oz when they were younger, but they were super excited to see Oz the Great and Powerful when it was released in the Blue Ray Combo Pack a few weeks ago. They were blown away by the graphics and the humorous characters! 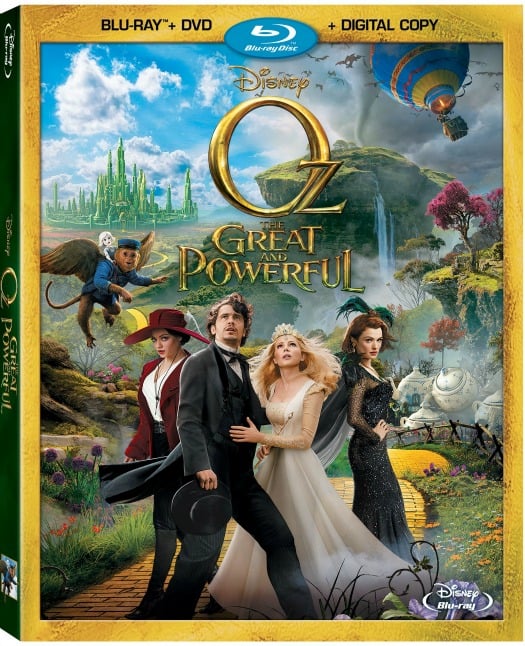 While they loved James Franco as Oscar Diggs, one of their favorite characters in the movie is Finley, voiced by Zach Braff from the hit show Scrubs. Zach and his co-stars from Oz recently sat down for a Q and A session about their roles in Oz the Great and Powerful.  Here are some of Zach’s interview answers about seeing his animated character, Finley, and why he describes Finley as a Downton Abbey Monkey!

Q:What went through your mind when you saw a finished version of Finley for the first time?
A: I couldn’t believe it. I saw pieces of Finley in EDR (enhanced data rate) but it wasn’t until the premiere that I saw him fully realized in 3D. I was so excited. He’s so much cooler than I could have imagined.

Q: Can you see your facial expressions in Finley?
A: Some people say they can see my face in Finley’s, but I don’t really see it. If anything, I can see a little in his eyes – but that’s about it. I tried to do a lot with my eyes during the film shoot because I thought that would be the most human thing to come through a monkey’s face.

Q: What do you think of Finley’s outfit?
A: Everyone keeps asking me about Finley’s outfit. I love it. Why is he in a bellhop uniform? Well, there used to be a line in the movie that explained how he was a valet for a wealthy munchkin. The munchkin’s mansion got destroyed, so Finley had no one to serve and that’s how he ended up in the forest. It’s a little like Downton Abbey. He’s a Downton Abbey monkey!

The interviews with all of the actors are really interesting; it’s always intriguing to find out how they landed their roles and the thought process behind their character development.  You can read more about their Oz experiences by downloading Q & A interviews with James Franco, Mila Kunis, Zach Braff and Rachel Weisz.

If you haven’t watched Oz the Great and Powerful yet, you should pick up the Blu-ray Combo Box.  It is full of extra features your family will love, like bloopers and a Zach Braff Puppet Theater.  After the movie, the kids can continue the adventure with these free movie-themed themed activities! Check out these mazes, match cards and masks by clicking on the image below. 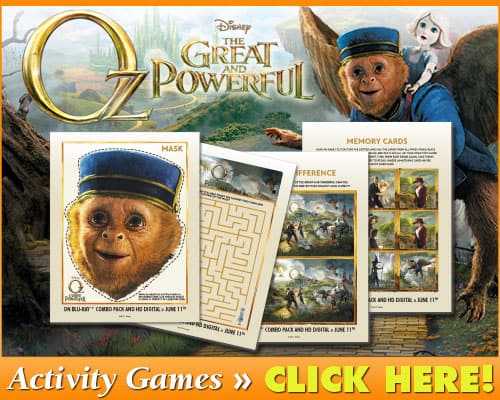 And don’t forget to stop by Disney’s Spoonful website for these awesome bookmarks and stickers! The kids can use them to save their place while reading their favorite book or give them as a gift to a friend. 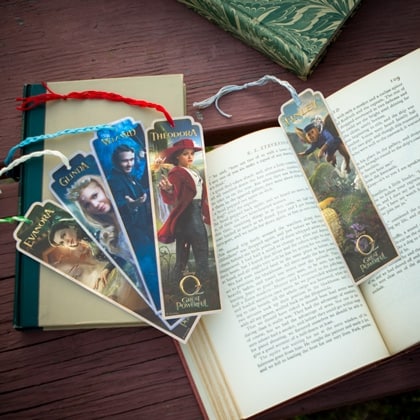 About the Movie: Oz the Great and Powerful

“When Oscar Diggs (James Franco), a small-time circus magician with dubious ethics, is hurled away from dusty Kansas to the vibrant Land of Oz, he thinks he’s hit the jackpot. Fame and fortune are his for the taking. That is until he meets three witches: Theodora (Mila Kunis), Evanora (Rachel Weisz) and Glinda (Michelle Williams), who are not convinced he is the great wizard everyone’s been expecting.  Reluctantly drawn into the epic problems facing the Land of Oz and its inhabitants, Oscar must find out who is good and who is evil before it is too late.  Putting his magical arts to use through illusion, ingenuity and even a bit of wizardry, Oscar transforms himself not only into a great wizard but into a better man as well.”


ShareTweetPinPocketMail
Around the Blogosphere-Add YOUR Giveaway Link
How Do You Keep Your Life Connected?