I’ll admit it. I’ve never seen an episode of the classic Three Stooges, and I could never figure out who did watch it. What exactly is it about that silly slapstick humor that people find appealing? Especially full-grown men??

Well, now I have my own little man, and I’m starting to “get” it. Kyle is almost 8, and though my husband isn’t a Stooges fan, physical humor definitely cracks him up. I think the answer to “Why?” is because little boys become big boys, our husbands and friends and fathers.

When I saw the previews for The Three Stooges, I knew that Kyle would enjoy it. He’s going to see a preview with me tomorrow night. Today I want to offer you up a chance to win a great giveaway, but stay tuned this week for more coverage, including my thoughts on the movie and an interview with Chris Diamantopoulos who plays Moe.

From the movie studio:

This spring, “3” + “Stooges” = the spring’s funniest family movie event: THE THREE STOOGES. Left on a nun’s doorstep, Larry, Curly and Moe grow up finger-poking, nyuk-nyuking and woo-woo-wooing their way to uncharted levels of knuckleheaded misadventure.  Out to save their childhood home, only The Three Stooges could stumble their way onto fame, fortune – and starring roles in a phenomenally successful TV reality show.

Visit the official website to play games and Get Stooged!

The Three Stooges is coming to theaters April 13. 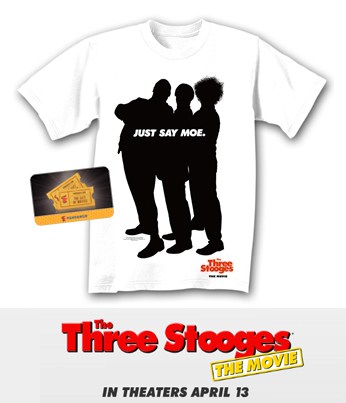 Leave a comment to enter. We’ll announce the winners on April 22.

Prizes and other promotional consideration from 20th Century Fox