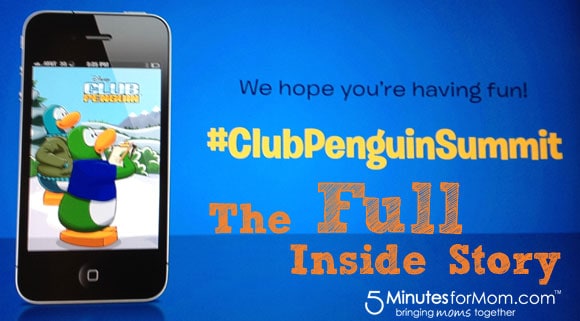 A couple weeks ago, I was familiar with the website Club Penguin but it didn’t jump out at me as something I should go out of my way to introduce to my children.

Janice’s boy Jackson, now age 11, has played Club Penguin for a few years, but my 5 and 7 year old girls hadn’t yet spent much time online.

So when I was invited to attend the Club Penguin Summit to learn more about kids online safety along with a special presentation about cyberbullying, I decided to go.

Wow, am I ever glad I attended!

I learned an incredible amount about how Club Penguin acts as a safe and fun introduction to social media and online gaming. I tweeted non-stop during the 2 day event and published a a quick post on the first night of the event.

Now I have gathered together a complete collection of my tweets and photos using the website Storify to create a full story of the summit.

As you read through the following story, you will join us on the journey inside Club Penguin, see the headquarters and learn from the presentations by the leadership team. I’ve included most of the presentation slides except those we were asked not to share because of trade secrets or privacy restrictions.

The #ClubPenguinSummit at Club Penguin’s headquarters in Kelowna was a 2 day media event held for approximately 20 bloggers and reporters.

Club Penguin is a fascinating virtual world that’s created and carefully monitored to allow kids a safe introduction to social media and gaming.
The media summit held April 11th and 12th, 2013 was the first time reporters or bloggers have been invited into Club Penguin’s headquarters.
For a list of Twitter profiles for bloggers on the trip, follow this public Twitter List.
And the snowball fight begins. Okay, not really. #ClubPenguinSummit pic.twitter.com/ARD85WYcvP5minutesformom
Landed in #Kelowna and I’m ready to meet some Puffles in person. But first a nap in my igloo. #ClubPenguinSummit pic.twitter.com/1b89HC8T3z5minutesformom
I’m looking forward to learning more about online safety for kids and the @clubpenguin game today at the #ClubPenguinSummit ~Sue5minutesformom

The Presentations Begin in the Club Penguin Theatre

The second day of the summit includes a few morning presentations and a Q&A session.
Excited for this mornings presentations here at the #clubpenguinsummit5minutesformom
Day 2 of the #ClubPenguinSummit kicks off. pic.twitter.com/lhmgVtasyH5minutesformom

View my #ClubPenguinSummit story on Storify.com.

Disclosure: My travel and accommodation expenses were covered by Disney for me to attend the summit.