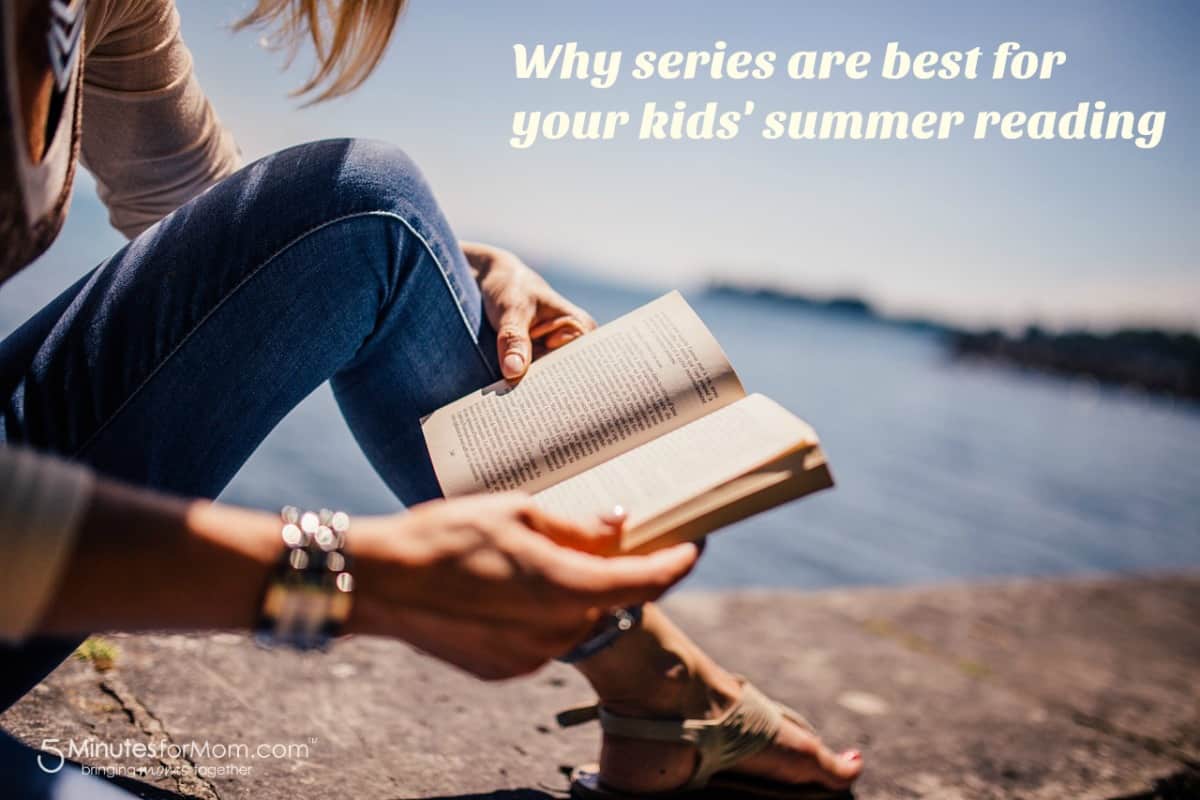 Jennifer Donovan here to share some thoughts about getting your kids hooked on books this summer. This post is in partnership with Disney-Hyperion.

Both of my kids enjoyed reading when they were growing up, but something happens when they hit their tween years. For my kids, it was a combination of busier extra-curricular schedules, harder schoolwork, and many other distractions of the electronic variety. My son is five years younger than my daughter and it’s been even tougher to encourage him to use his free time to read, especially in the summer, which he sees as “his time.”

The key to getting him to read is finding a book that he loves, something that doesn’t take long to get into and is written to hold his interest. Two summers ago he started a series that his sister had enjoyed when she was his age, and all of a sudden, he couldn’t stop reading! The reason I love a good series for summer reading is because as soon as they finish a book, they know exactly where to go for more, and they just keep reading.

It actually worked for my college daughter as well. She started book one in a series I thought she’d like, that I’ve been meaning to read myself, and she loved it, and promptly asked if I had book two.

Book three in the Serafina series is out on July 3, for those of you who are already fans. For those who aren’t familiar with the series, hand it over to a kid in your life now. It’s just the kind of fast-paced exciting story that keeps kids interested.

Set in the magical Blue Ridge Mountains of North Carolina, Robert Beatty’s #1 New York Times best-selling series stars the fierce, resilient character of Serafina, a wild girl longing for kinship and struggling to understand her place in the world. This timeless story of finding one’s true family and best self chronicles an epic battle between good and evil and rewrites the rules of who can be a hero.

About Serafina and the Splintered Heart (Serafina #3), out July 3
By Robert Beatty

The storms are coming….

Something has happened to Serafina. She has awoken into a darkness she does not understand, scarred from a terrible battle, only to find that life at Biltmore Estate has changed in unimaginable ways. Old friends do unthinkable things and enemies seem all around.

A mysterious threat moves towards Biltmore, a force without a name, bringing with it violent storms and flooding that stands to uproot everything in its path. Serafina must uncover the truth about what has happened to her and find a way to harness her strange new powers before it’s too late.

With only days to achieve the impossible, Serafina fights to reclaim herself as the Guardian of Biltmore, friend of Braeden, daughter of her Pa, and heroine of the Blue Ridge Mountains and all the folk and creatures that call it home.

In the epic third installment of Robert Beatty’s #1 bestselling series, Serafina takes her rightful place among literary champions as she battles fiercely to defend all she loves and become everything that she is meant to be.

Robert Beatty lives in the mountains of Asheville, North Carolina, with his wife and three daughters. He writes full-time now, but in his past lives he was one of the pioneers of cloud computing, the founder/CEO of Plex Systems, the co-founder of Beatty Robotics, and the CTO and chairman of Narrative magazine. Visit him online at www.robert-beatty.com.

More Ideas to Get Your Kids Reading

Here are some more ways to encourage your children to read and enjoy learning.