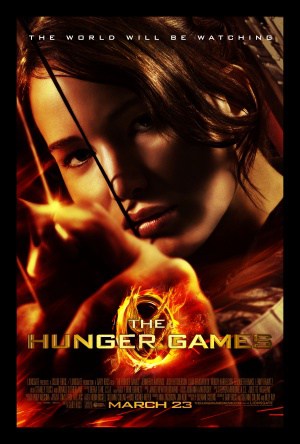 Whether you first read the book when it came out 3 1/2 years ago, or you just read it recently in anticipation of the movie, or even if you are a movie lover who didn’t even know it was a book, there’s no denying that there is a lot of buzz about The Hunger Games movie.

The world will be watching

This movie poster tagline is true of the fictitious Hunger Games, which is an event that the Capital uses to keep the districts of Panem from trying to uprise against them again. In these Hunger Games, two young teens from each of the 12 districts are selected to fight in a battle to the death. These horrific “games” are required viewing for all citizens.

But on a broader sense, many of us living right here in North America in 2012 are going to be watching too. Over at 5 Minutes for Books, several of us can hardly wait for this movie. It releases March 23, and believe me, we will be watching.

As booklovers, many of us have read the entire trilogy, and we were happy to know that author Suzanne Collins was involved with the screenplay, which gave us confidence that this movie adaptation might not make us lash out in anger.

For those who loved the book AND those who are new

If you first loved the book, please check out my post at 5 Minutes for Books today where I talk about some of the hard work that producer Nina Jacobson did to insure the integrity of the story after she bought the rights to option the film. She also defends the differences between the Hunger Games book and the movie. I even share why I think the Hunger Games movie might be even better than the book.

But perhaps you’re wondering if the movie will appeal to you if you don’t have the background of the book or the whole series of books. Jacobson said that was a big concern — making sure that those who aren’t familiar with the story would “get it.” They specifically worked with focus groups who had not read the book.

This movie is attracting even more fans to the books, but I think that the movies are going to stand alone as excellent works of art. 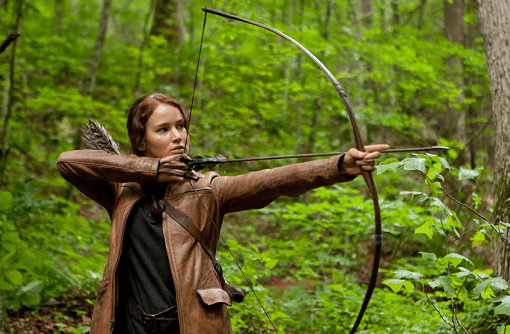 Behind the scenes with producer Nina Jacobson

Actress Jennifer Lawrence, shown as Katniss, trained with an Olympic archer so that it would seem natural to her. She also did agility training so that she would seem at home in the woods and in the trees.

The movie was shot on location in North Carolina. When Jacobson and her team were scouting “we could not believe how ridiculously perfect it was for what all we had in mind” Jacobson said. That one state offered perfect venues: the town square where the reaping took place, the area that they used as the Hunger Games arena, coal-mining towns, and the big city Charlotte for the more modern scenes in the Capital.

What about the violence?

Many have shied away from this story because of the cruel storyline. The movie is rated PG-13, which I think it would have gotten for content even if no blood was shed. I haven’t seen the movie yet, but another blogger asked about the violence. The book is recommended for ages 12 and up (though I know in reality many kids age 10 and up are reading them or will want to tag along with their older siblings to see the movie) and it was important to Jacobson and others involved in the film that it would be accessible to those who had first fallen in love with the book.

It was important to Jacobson that the violence would not be “gratuitous or glamorized or stylized.” They tried to walk the line between showing the gravity of what these people were exposed to and to allow the moviegoers to feel how wrong it is, but not to dilute it in any way.

I’ll be at a Friday showing when my kids are at school. My 13-year-old daughter, who first introduced me to the book, will be going with some friends over the weekend. Whether you’ve read along with your tweens or teens, or discovered the book on your own, or are just in for a good night out at the movies — I want to know —

Will you be watching?