Maybe you know him best as Cyclops from X-Men, or perhaps he made you laugh hysterically like me with his hilarious performance in Death at a Funeral. This spring, be prepared to know James Marsden as Fred O’Hare, the man who hits the Easter Bunny’s teenaged son, E.B., with his car in the new movie HOP. Caring for E.B. proves more than he bargained for, but both may end up wiser and happier for the experience. 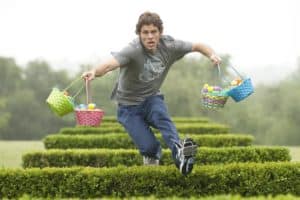 I recently had the great honor and pleasure to represent 5 Minutes for Mom at a parenting blogger roundtable with some of the actors from HOP, as well as the producer Tim Hill, and the director Chris Meledandri. When James Marsden first entered the room, my preconceived notions of “Hollywood movie star” disappeared, replaced by the down-to-earth manner in which he engaged in a lovely conversation with the group.

Since we all had parenthood as common ground, talk quickly went in that direction, and our twenty minute discussion hit upon several themes, such as parents as a united front and encouraging children to pursue their own interests. Of course, with HOP being a movie all about Easter, including the presentation of a unique mythology to the secular aspect of the holiday, Marsden also shared some personal stories of his own family traditions for Easter celebrations, both as a child himself, and now as a parent of two young children.

Are you or your wife the primary disciplinarian?

“We’re both fun, but we’re very much believers in that united front.

We have different dynamics with our kids. Mary, my daughter, she will play dragons versus dinosaurs for an hour and I’ll just stop what I’m doing and get in that world with her and my wife says, “I can’t play that long.” But, she’s great about taking them out places being outside with them.”

It seems to be inevitable that actors who are parents get questioned about how they would respond if their own children wanted to pursue an acting career. It was clear that he had given this previous thought, as his immediate response was both articulate and confident.

How would you respond if your child wanted to act as a career?

“We create very solid parameters with disciplining. You allow your child to blossom into who they are. We don’t get hung up on, “You’re not going to be an actor.” If my son wants to be an actor, he can, but when he’s 18 years old. You hear these stories of kids who get started at four and the mother’s says, “Well, I asked him and he said he really wanted to do it, it’s his decision.” He’s four. Of course, he wants to do it.

I want to give my kids their individuality, and allow them to be themselves. I want to give them self-confidence and all these things. And you’re basically there to guide them and then, they’re their own people. You’re there to be an example, a good example, and to raise them right, but beyond that, they’re going to do what they want. I just hope, by the time they’re adults, I have done what I can and have shown them how to treat people and how to respect themselves.” 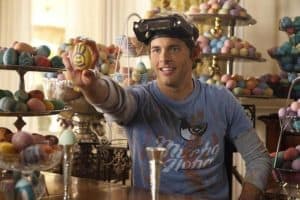 I have to admit to an extreme case of nerves at the start of the roundtable discussion, because honestly, this was James Marsden! But when I discovered that my two older children were the same ages as his, I wanted to capitalize on this connection when I got an opportunity to pose a question of my own. With a five year age difference between the children, I wondered if he was having any troubles keeping the “magic” of the holidays alive for his younger child, seeing as I’ve had to have a few conversations with my own ten year old son about the mumbling he’s been doing under his breath when his younger siblings talk about the Easter Bunny, Santa Claus or the Tooth Fairy. Turns out that his son could stand to teach my son a little lesson in the joys of holding on to those beliefs.

How do you keep the magic alive?

“My 10 year old son is a believer. He hears things from kids at school, but my wife has been really good about that. My wife still believes. She’s said, “My father taught me that if you believe in it, it’s there.”

My son came home and said, “People at school are telling me that there’s no such thing as Santa Claus.” And I said, “Oh, that’s too bad. Some people don’t believe in it.””

Clearly, James Marsden and his entire family are keeping that magic alive for each other, and Easter morning should be one filled with wonder for everyone! 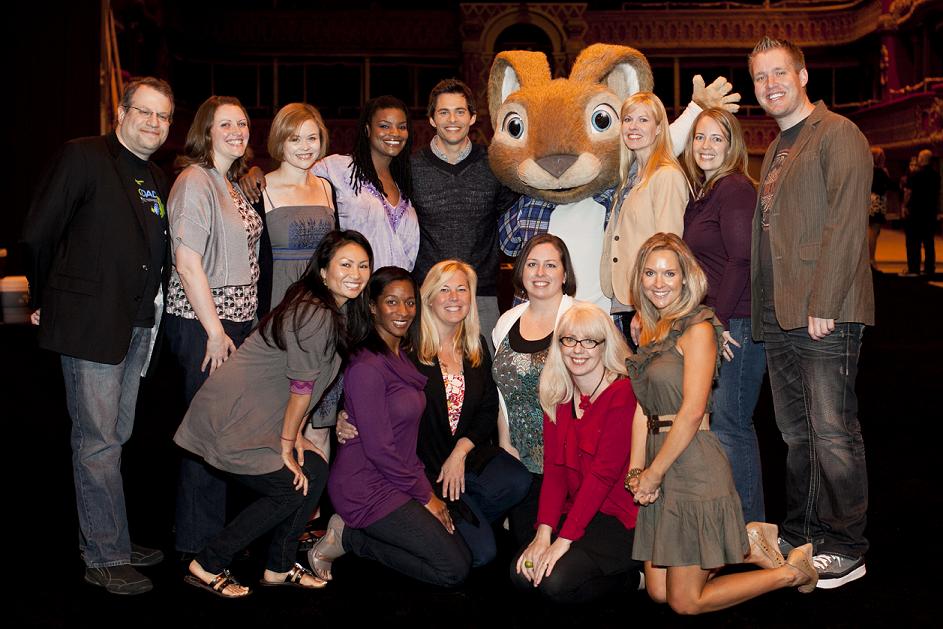 Overall, I was thrilled with the entire experience, and I’ll be talking about it for a long, long time. Don’t miss my other pieces on the fabulous trip:

5 Minutes for Books reviewer Dawn is really a simple girl at heart, whose typical posts on her blog, my thoughts exactly, feature her cute kids and frequent attempts at humor.

ShareTweetPinPocketMail
The Mom’s Guide to Traveling with Kids, with Giveaway
Prize Updates for the Ultimate Blog Party 2011