Our 5 Minutes with Nana columnist, Teresa Kindred, joins us today with important advice about how to talk with your child’s grandparents about critical issues such as child safety.

Everyone has their own way of doing things and let’s face it, no matter how much you love someone sometimes their habits can get on your nerves. It’s like finger nails scraping a chalk board, you can only stand it so long and then you have to scream, “Will you stop that!”

What if those habits involve grandparents?

It’s one thing if it’s something you can ignore and another thing if it endangers children. For example, if your child’s grandparents take medications and consistently leave them out where the grandchildren can find them, that’s a problem. Or maybe they have a swimming pool and they forget to shut the gate. It only takes one mistake to have long lasting or even fatal consequences. 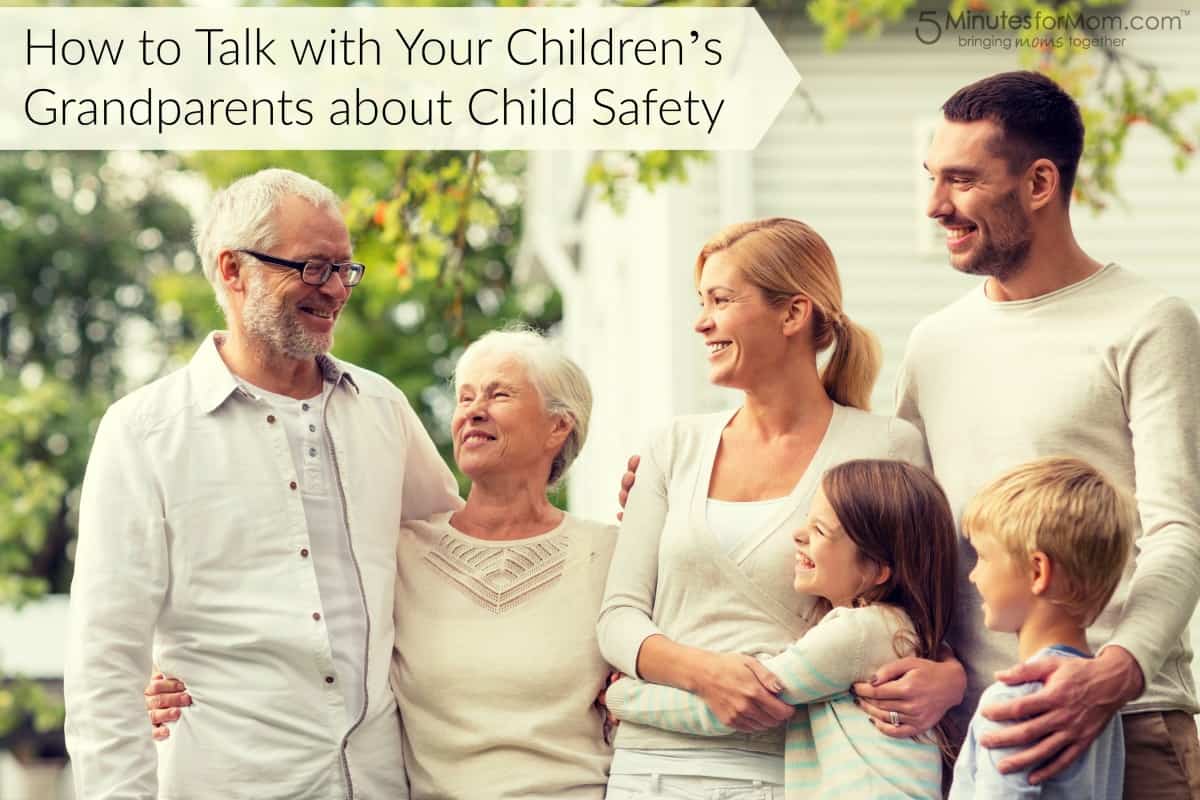 That’s why it’s important for parents and grandparents to communicate clearly and compassionately.

Don’t wait until after an accident happens to have a conversation about habits of grandparents that concern you, have it now. If my daughter-in-law or my daughter sees something at my home that could endanger my grandchildren I want them to tell me about it so I can change it and most grandparents feel the same way. The important thing to remember is it makes a difference how you communicate your concerns.

For instance, if my daughter yelled at me and said, “Mom, if you don’t put that medicine up where my children can’t reach it they are never coming over again,” my feelings would be hurt and I might respond defensively. But if she says, “Mom, I noticed you left your medicine on your bedside table and the kids could easily reach it. Would you please keep it in a place where they can’t get to it?” the conversation would go much smoother.

The important thing is my grandchildren’s safety but yelling and getting angry can hurt feelings and relationships.

Almost half of the 1.34 million calls to poison centers are related to medicine and every day there are more than 1,100 calls where a young child got into someone’s medicine. Yes, those numbers are alarming but a new study shows that teens are also at risk for unintentional poisoning.

The percentage of 15 to 19 year olds who experience a serious outcome is more than 6 times greater than the percentage of toddlers. So when it comes to medications it’s not just toddlers you should worry about. Click here to read more from this study.

Whether your children are toddlers or teens, all medications should be out of sight and out of reach.

The other example I mentioned was pool safety. According to the CDC, “Children ages 1 to 4 have the highest drowning rates. In 2009, among children 1 to 4 years old who died from an unintentional injury, more than 30% died from drowning. Among children ages 1 to 4, most drownings occur in home swimming pools.2 Drowning is responsible for more deaths among children 1-4 than any other cause except congenital anomalies (birth defects). Among those 1-14, fatal drowning remains the second-leading cause of unintentional injury-related death behind motor vehicle crashes.”

Of toddlers who drown 80% of them are males. As the mom of 4 sons that doesn’t surprise me, but it scares the heck out of me because I have a 2 and a 4 year old grandson.

Safety conversations are important. These are just two of many discussions you might want to have.

Internet safety and car seat safety are two other important topics where rules at home and at grandparent’s houses need to be established and maintained.

If you haven’t discussed these important topics, don’t wait. Your children and grandchildren depend on you to take care of them and with clear and compassionate conversations between parents and grandparents we all can do a better job.

Written by our 5 Minutes with Nana contributor Teresa Kindred who is the founder of nanahood.com