Dawn, 5M4M contributor, recently attended a press junket for the movie Blended. Expenses for her travel and lodging were covered by Warner Bros. Pictures, but all opinions expressed here are wholly her own.

You likely know Wendi McLendon-Covey from Bridesmaids, the laugh-out-loud funny movie in which she played Rita, the mother of three boys whose descriptions of parenting adolescents made me simultaneously roar with laughter and cringe in fear. Currently, her comedic talents are on display every week on The Goldbergs, where her portrayal of overbearing (but completely loving) 1980s mother Beverly Goldberg has earned her more fans than ever. Next week, she can be seen in the new film Blended, as Jen, the snarky best friend to Drew Barrymore’s character, and her humor skills are in full effect! 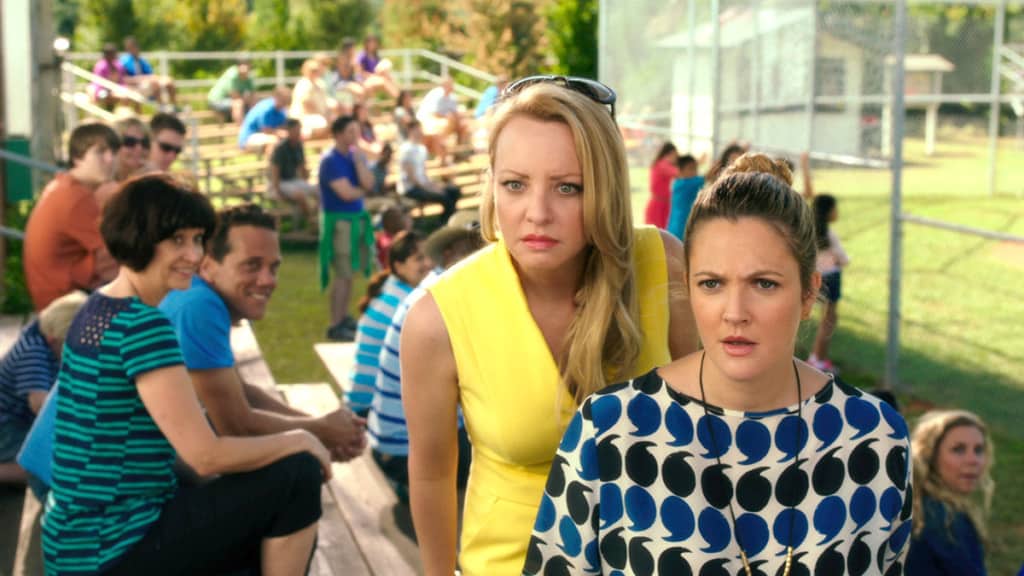 Check out my take on the delightful chemistry between Drew Barrymore and Adam Sandler, and read more about the upcoming movie Blended.

During a recent parent blogger junket, our group spoke with Wendi McLendon-Covey, and she had us laughing from the moment she walked in the room. The presence that she brings to her onscreen characters was just as evident as she answered questions about her work in this film as well as some of her other best-known roles.

Seeing the outtakes of any show or movie where the actors break character and fall apart with laughter is always fun to see, and according to Wendi, we might have some to look forward to when Blended comes out on DVD. Like I imagined, working with Adam Sandler can often lead to spontaneous laughter during filming, and Wendi was not immune from it. When asked how she manages to keep a straight face during the filming of a comedy like this, her answer itself started with a wryly-toned joke:

Wendi McLendon-Covey:  Who’s to say I did?  There are plenty of times when I would–because when I get the giggles, I can’t stop.  Okay.  Full disclosure, I can’t stop, and then everything shuts down.

So, there were times when Adam and I were trading insults, and I just couldn’t stop myself.  I just couldn’t stop, and then I cried my make-up off, and then we had to do it again.  I always think, oh, I’m going to get fired if I don’t stop it, so I pull it together. That keeps me from losing it totally, but yes, I can’t keep a straight face.  Believe me.  In the DVD extras, you’ll see.

Being known for playing several quirky characters who certainly leave an impression, a member of our group asked Wendi if she could choose which was her favorite to embody. For her television fans, her response should come as no surprise:

Wendi:  I sure love playing Beverly Goldberg [of ABC’s The Goldbergs], and I mean, not just because she’s on my plate right now, but I genuinely love going to work.  And I genuinely love working with those kids.  It’s the most challenging thing for me, because I don’t have any kids.  So, that to me I think is my favorite role. 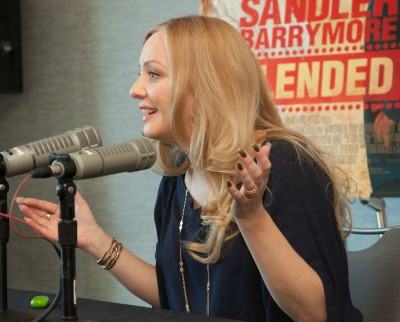 In preparation for this junket, I had actually just watched a couple episodes of The Goldbergs, which I had somehow not started with when it premiered this season, even though my mother had been recommending it since the very first episode. Now I’m kicking myself for waiting, because this show is funny, and Wendi McLendon-Covey is one major reason for the humor! Inevitably with a hot role like this, the group couldn’t resist asking more about her experiences on the show. Most especially– the hair. Sitting in front of us with her luxurious, long locks looking beautifully smooth, it’s hard to believe that she appears on our television screens every week with a wild, poufed-out 80s ‘do. Don’t worry, we learned that her own hair doesn’t suffer at all in the process:

Wendi:  That is a wig, and it gets styled before I get there.  I’m lucky I came through the ’80s with my own hair still growing out of my head, so I just felt it would be best if I didn’t do that again. And it’s great because they just put it on my head, and I’m good for the day.  I can’t use hairspray really, I’m allergic. So, I don’t know what she does to it, but it holds its shape all day.  But, by the end, I want to stick a fork underneath and start scrathing it.

[The Goldbergs] is the most fun I’ve had doing anything.  And she is a real person who exists, okay? I mean, there really is a Beverly Goldberg, and she’s 70-years-old, and she watches this, and I wear her clothes.  She sent me a bunch of her clothes.  And she weighs in, and she has very definite opinions.  And we’ve toned her down a lot.  And people think, oh, no, that’s not true.  Yes, it’s true.  No one would believe it.  Okay.  And more of that stuff will come out in season two.  We just got a season two!

I love playing her because every time she makes an ass of herself, it’s because she loves her family so much.

I mentioned earlier that my mom is a huge fan of The Goldbergs, and more than one of our conversations has included her going on about how hilarious she finds “Beverly.” When I told my mom that I would be part of the group interview with Wendi McLendon-Covey, she told me that I had to tell her that my mom was a big fan. (“Sure, Mom. I’ll just slip that in.”) During the event, many bloggers were tweeting at the stars with whom we would soon be meeting. Wendi was pretty active on Twitter that afternoon in between interviews, too, as she was retweeting and favoriting many of these tweets. Though my mom isn’t on twitter herself, and isn’t really certain what it means to ‘retweet’ or ‘favorite,’ I thought she’d be happy when I told her that I got her message to Wendi:

Our group couldn’t have been more entertained by our interview with Wendi McLendon-Covey, and if you head to the theaters to see Blended, be prepared for another quick-witted and sharp-tongued character who will have you laughing!