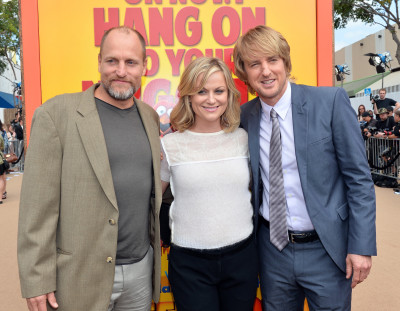 5M4M writer, Jennifer D.went on an expenses-paid trip to L.A. sponsored by Relativity Media to participate in parent blogger roundtables. Her opinions are her own.

What the director Jimmy Hayward said about her: 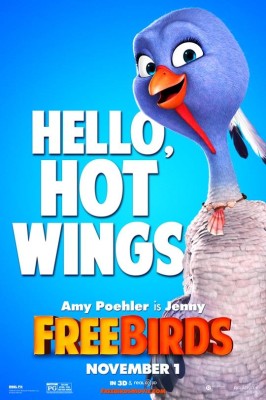 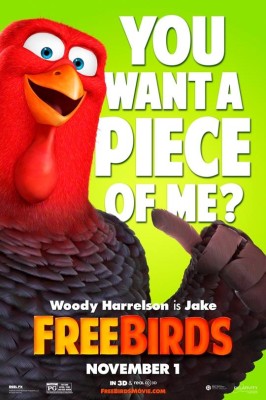 Interviewing Owen and Woody was like herding cats, seriously. They were paired, and not only do they play buddies in the movie, apparently they are real-life buddies.

As cast member Amy Poehler said about the Free Birds movie, “It’s like a buddy comedy with the two of them. And their chemistry is really natural. I knew that everyone would buy that they would be friends like they are in life.”

That definitely came across as they joked around the whole time. We started off the interview by asking if any of their kids had seen the movie yet:

Woody Harrelson: My little girl Makani, 7, and I asked her the other day what her favorite movie was honestly. She said Free Birds. Of course, I had asked her every other day before that and sent her to bed without dinner–.

Owen Wilson: —So, she was a quick study.

Woody Harrelson: Yes, she got to eat that night.

Owen Wilson: I did one of the talk shows the other day, so they sent some clips over, and I showed them to Ford, who’s almost three. And, bless his heart, but he just loved it. He thought it was the funniest thing he’d ever seen. He was like “Dada. When were you going to tell me about this? What the heck? You’re just keeping this to yourself? Hang onto your nuggets. Come on.” 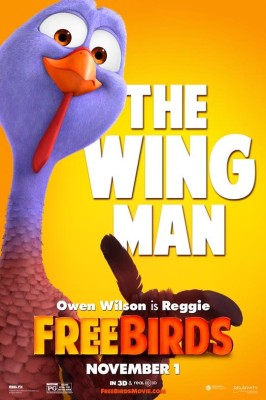 This was Woody’s first time to do an animated film, and he enjoyed the process. Owen is a staple as Lightning McQueen, and here’s why he prefers animation, “I’m trying to think of a word that sounds better than easier. You don’t worry about wardrobe or kind of people coming over with hair and makeup and stuff, and you just go in and kind of make believe. So, yes, I like doing animated.”

What Jimmy Hayward, the director, said:

“Owen and Woody are both such great actors. Owen really comes across like Owen, in the appeal that his voice has. When you see him play in all these other movies, he’s just got that sort of stumbly sort of an Owen thing where it’s basically like he always sounds like he’s telling you a secret or something.

And then, of course you know Woody’s played, a wide variety of characters. He is a great lovable dumb guy in a lot of stuff. Even though he’s a whip smart person, he plays a lovable dumb guy really, really well.”

In this hilarious, adventurous buddy comedy for audiences of all ages, directed by Jimmy Hayward (Horton Hears a Who!), two turkeys from opposite sides of the tracks must put aside their differences and team up to travel back in time to change the course of history – and get turkey off the Thanksgiving menu for good.

ShareTweetPinPocketMail
Wordless Wednesday – Selfies Are More Fun with a Friend #BlissdomCA
Coupay.com: Save on Shopping Thru Social Sharing