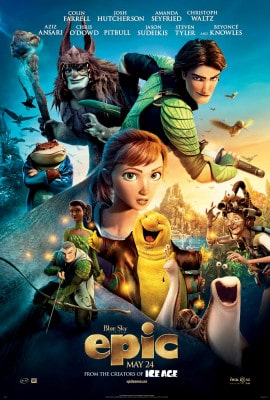 Dawn, 5M4M contributor, recently attended the EPIC movie premiere in New York City. Expenses for her travel and lodging were covered by 20th Century Fox. All opinions expressed here are wholly her own.

Prepare to have your view of the forest changed forever. Coming to theaters this Friday is the 3D CG film EPIC, an adventure comedy film that will wow both children and parents alike. I recently had the opportunity to attend the premiere and participate in roundtable interviews with the director and several stars of the film. I’m thrilled to share my impressions of the film, along with some behind-the-scenes fun tidbits from the junket experience.

The Story: The Leaf Men and a Hidden World in the Forest

Little do we humans know, there is an entire world of tiny creatures living all around us in the woods. The Leaf Men help to protect the lush forest world from the forces of evil who wish to eliminate the spirit of the forest, taking away all growth and replacing it with decay and rot. MK, a teenage girl visiting her father’s home on the edge of the forest, gets mixed up in this world on a magical day and suddenly finds herself shrunk and in the middle of the action! MK may not realize it at first, but she is an integral part of helping to save the forest world, and in turn, the creatures of this tiny world just might help her figure out how to save herself, too.

I’m typically not a fan of 3D movies– I don’t like feeling like things are flying at my face, and I’m the person you’ll see in the theater trying to swat away visual effects. Initially, I balked at viewing EPIC in 3D, imagining tiny arrows being sent zooming off the screen. However, I’m happy to say that the 3D effect only enhanced this film by providing an incredible depth to the lush and verdant world of the forest. I wasn’t perturbed by anything being projected at my face, but I did have to stop myself from reaching out to touch the blooming flowers and the vibrant plants of the forest! Even my twelve year old son who attended the movie premiere with me remarked within the first few minutes of the movie, “Wow. This looks so cool!” We both stand in awe of the animation team responsible for these literally amazing visuals.

“Just because you haven’t seen something, doesn’t mean it’s not there.”

That quote was one of my favorites from the movie, uttered by MK’s bumbling, but good-intentioned father. Director Chris Wedge echoed that sentiment during our roundtable interview, describing the themes of the movie.

“The themes were more about connections between people and finding things that we don’t realize are there, because I think that it’s emotionally satisfying to discover that someone’s been thinking about you, or somebody helped behind the scenes, or when you’re in trouble, somebody comes through that you didn’t expect to hear from.”

I found that to be an honorable theme for a children’s movie, and the delivery of this message isn’t preachy or overstated, but presented in a way that shows the characters reliance on each other as an important part of their community’s survival. “Many leaves, one tree” as said by the character of General Ronin, the leader of the Leaf Men and voiced by Colin Farrell, expresses the idea of this interconnectedness overtly in the film, and I think even younger children will understand the idea behind this symbolism.

A Magical World Onscreen, a Magical Experience for Us

When Director Chris Wedge speaks of the magic of this world, his words are easily understood by anyone– adult or child– who loves spending time in the natural world.

“When I walk into the forest, the one thing that I sense, if you just stand there for a second, you feel this kind of magical presence.  I was just trying to express that in a fantasy.You feel the silence, you feel the strength, you see the leaf growing, the birds flitting around.  It’s just happening all the time.  Feels like magic to me.“ 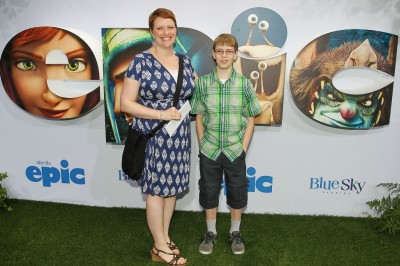 I felt this magic, too, as I watched EPIC, and I found myself looking forward to an upcoming family camping trip in the woods even more! For me and my son, the entire experience of heading to New York City for the premiere was a whole different kind of magic, too. From walking the “Green Carpet,” (which we later learned was actually made of real grass!), to viewing the film in the beautiful Ziegfeld Theatre, to laughing with the director and stars Colin Farrell, Amanda Seyfried, Aziz Ansari, and Chris O’Dowd during the group interviews– it was all a bit surreal and incredibly exciting. I’m happy that all the fun revolved around a movie that I can happily recommend to families!

If you haven’t yet caught the trailer for EPIC, be sure to check it out:

Will you be taking your kids to see EPIC when it opens on Friday, May 24th? I can’t wait to hear what you think!

Be sure to check out  my other thoughts on EPIC: