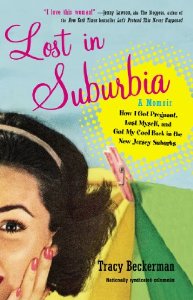 I’ve read the humor column of Lost in Suburbia: How I Got Pregnant, Lost Myself, and Got My Cool Back in the New Jersey Suburbs author Tracy Beckerman for a long time. She’s a hoot to read and a hoot to talk to in person. The (extended) title of the book pretty much sums up the content, and it’s told in quick bites with vivid pictures that frequently made me giggle while reading.

I adore the prologue, in which Tracy is pulled over for making an illegal left turn out of the school with her three year old in the back… while wearing her ducky bathrobe. It is a promising and entertaining start to a book that keeps it up pretty much throughout. Though the book is filled with humor, there are situations far too many of us can relate to with real issues many moms face.

Tracy has defined herself by her job, but that is now gone. She moves to an area where she knows no one and struggles to figure out how to fit in. She is no longer comfortable with the body she’s in during and after children, and she decides to do something about it. For part of the book, I want to shake her and sit her down and tell her to chill, but she’s obviously so past that at this point in her life – thankfully, I’m sure.

She deals with the majority of the topics with grace and a constant self-deprecating humor. I absolutely adored how she dealt with mean-mom Cheryl who has apparently made up a peanut allergy to get her child into the preschool she wants. When Cheryl’s spoiled child tells Tracy she can’t sit in her chair because she’s too fat and Cheryl does nothing but smile, Tracy exacts the perfect revenge by suggesting that she and Cheryl trade places. It’s only when the child refuses because her mom is also too fat that Cheryl begins intoning the lesson about how it isn’t nice to call people fat. Score one for the nice guys!

Throughout the book there are little things that resonated with me, from the horror of grandparents accidentally introducing a Hello, Kitty pacifier to their son Josh to “someone’s unrealistic expectations” when searching for a larger house – an issue I had while spending eighteen months (no joke) looking for my current house. Her continual creativity and entertaining stories meant that the few times in the book that she deviated from this really fell flat for me. When she talked about how so many pregnant women look like they’ve simply swallowed a basketball, she comments that she (turn the page – fill in the blank with a groan for the old joke before you read it) looks like she swallowed the whole team. There were only two or three tired jokes like this in the entire book, but because the rest of it was so creative and so her, they really stood out in the reading.

So do I have my cool back? Not nearly as well as Tracy does. She’s found her friends, she’s found her calling, and she’s found her way to show her personality and be cool even as she’s pressured to buy a mini-van (a battle I’ve also successfully fought). Through all the humor, Tracy imparts some valuable lessons for moms who feel like they’ve lost it all. It isn’t a self-help blueprint, but there are so many concrete steps that Tracy took to get her cool back that it’s easy to see where others can do the same, even if their paths look a little different. And if they use this as their plan, they’ll get a few giggles on the way.

Check out Tracy’s Lost in Suburbia blog for more.

Follow the instructions in the Rafflecopter below if you’d like to win your own copy. We’ll announce the winner in our book giveaway column on April 29. Our giveaway for another great mother’s memoir Bloom is still open for another week.

Michelle still hasn’t fully gotten her cool back, given that she’s still growing out her mom bob into something… else. Fortunately, she’s pretty cool with her life, and you can read about why on her blog Honest & Truly! or follow along with her on Twitter where she is also @HonestAndTruly.