I was an early adopter. I created my account in August of 2008. Back then I had a handful of friends. My husband didn’t become a member until October of that year. What am I talking about? I have to be talking about Facebook, of course.

Anyone who was on Facebook in those early days will remember that there weren’t many people to chat with. My only friends on Facebook were a few college buddies and a couple of local moms. That’s it. I could go days without seeing a new status update from one of my friends.

Few businesses were on Facebook back then, so there wasn’t any of the chatter about new products, giveaways, or deals. Facebook was mostly for stating your day-to-day goings on, posting photographs, and occasionally having a conversation with a friend about some hot topic or news story.

Facebook is VERY different now. Likely, you have many more friends and family on Facebook than back when you first joined. But you have to wade through status update after status update from people you know, people you hardly know, and of course businesses to find the photos from the family July 4th BBQ posted by Aunt Gwen. While you want to read about that latest deal from Best Buy, you want to see the photos from your Aunt Gwen’s BBQ sooner rather than later. Enter: Hubble.

Hubble is a private Hub to help your immediate family communicate, share, and preserve memories. You can think of Hubble as a private social network built just for the people you live with. Whether you are traveling on business or your kids on are on a sleepover, Hubble keeps you together even when you’re apart. Hubble is a private site just for your family and is available for free in the iTunes store.

What can you do with Hubble?

The “People Screen” allows you to send text or audio messages to the people in your family with a tap of the button. Or just call them. Hubble preserves a record of those messages in the family timeline so everyone can see what’s going on.

On the private Hubble timeline you can post a message to share what you’re seeing or thinking for your immediate family to see. And when you want to share with your extended friends and family we connect you directly to email, Facebook, and Twitter.

Now you have one place where your family stores their communications and their memories. Together you are building a scrapbook of the daily life of your family!

Hubble will help a family to communicate and organize by providing one central hub that everyone can see at all times. 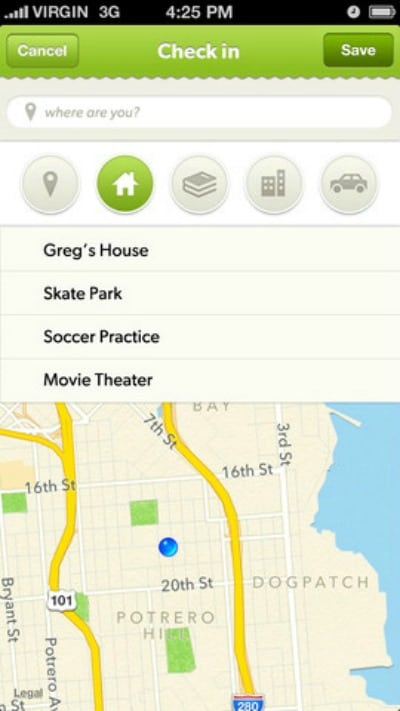 One feature of Hubble that I am interested is the family safety feature. As the parent of a teen on the cusp of getting her license, I will want to know her whereabouts at all times when she is on the road. Whether she is at school, home, a friend’s house, or the mall, I need to know where she is. Hubble allows family members to check-in and show when they’ve reached home or school. Hubble even has the feature where a parent automatically knows when their child arrives home from school due to positioning of GPS on the child’s phone.

“It’s always a special moment when your family sits down together around the table. We, at Hubble, hope to extend a little bit of that feeling of connection throughout your day with Hubble. With Hubble, every message is from someone you love!“

Hubble is compatible with:

I was compensated to write this review.  The views expressed in this review are my own.