I admit, I’m one of the parents who signed their kids up for tiny soccer, tiny baseball and tiny gymnastics. Not at the same time, don’t worry.

But we’re big on getting active in our household and we love our sports, so as soon as they were able to even dress themselves, I was all for getting them on a team and all that being on a team entails: team work, leadership, independence, a sense of accomplishment, you know, all the good stuff. Hearty life foundation type of stuff. Of course, I was expecting excitement since they love kicking the ball around or playing catch or tumbling.

Instead, I was met by this face. 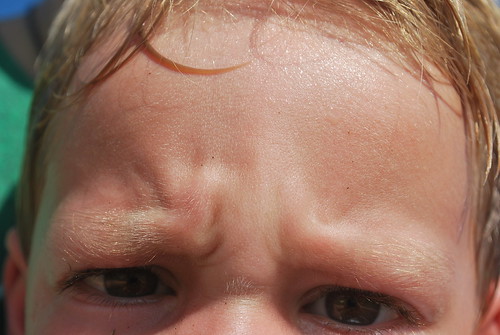 And lots and lots of some variation of this. 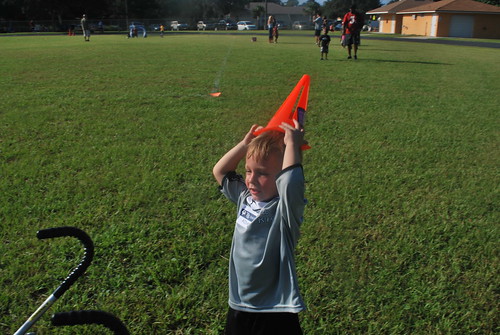 This would frustrate me sometimes as I watched the other kids happily playing along while mine was doing sand angels and building castles refusing to play. I tried my very hardest to be supportive (which included some form of bribery at times — just kick it one time? Please?) but eventually I learned to just take their lead. No pressure.

I was under the illusion I was doing the right thing by getting them into sports early. But was I?

How early is too early to start children in sports?

That’s what I wanted to know, so I posed that very question to Dave Ferguson, a sports fundamentalist and the host of the sports radio show, “Beyond the Cheers.” He not only had great insight into how to work with our little ones, but he had some warnings for even the older children who are out there playing team sports.

Here are some guidelines for you to go by for tiny sports:

Ages 4 and under: “Two and three is fine maybe for some exercise, for running around, the typical kid stuff,” said Ferguson, but not really “organized” sports. “Four and under, I think you should keep it to regular child play time, regular regular kid stuff. Getting into organized sports at that age, I think is actually kinda silly to be honest with you, in my humble opinion.”

Children are still developing, said Ferguson, so be very careful to not overdo it. “You run the risk with kids of that age of doing some damage to their bodies to their bone structure to growth plates, things of that nature, so it does have a compounding effect,” he said.

Ages 5-7: “It’s recreational, it’s a bit more fun, of course you get kids sitting there playing in the outfield making sandcastles, but I think, you know, even with hockey, kids get into it at 5 years of age and there’s programs geared towards them,” said Ferguson. But still, keep it recreational, he said.

Ages 8 and up is where it really gets competitive and that where Ferguson becomes concerned.

Ages 8+: “At 8 years of age, you’re seeing kids at that level, even up to 10, are playing baseball where they’re starting to get Tommy John surgery before they even get to their teenage years now and the reason for that being is it could be the parents pushing too much, it could be the coaches telling them to do a lot more pitches a number of pitches, different style pitches,” he said. “We’re seeing a rise in concussions, we’re seeing a rise in ligament damage, collarbone, the injuries are getting a little more higher these days,” said Ferguson. Not to mention knee injuries.

Children who have had concussions early in their lives are having difficulty with learning, said Ferguson, and they’re having difficulty moving forward with their lives. Not only are children playing sports too many days in a row, Ferguson says society is becoming increasingly desensitized to violence, which translates to playing rough on the field. Put these factors together, and you have trouble.

Ferguson admits it’s difficult to limit organized sports to three days a week especially since high school sports often practice at least 5 days a week (even his own son played football sometimes 6 days a week.) “It’s the big “b” word — balance. You don’t want to overstep the boundaries, it’s a very fine line. And you also have kids that want to do this 24/7 but there are risks associated with that,” he said.

It always boils down to balance, doesn’t it.

So what about you? Did your kids start sports early? How do you keep an eye on things to prevent injury? Do you have any rules for sports?