I find it fascinating to discover “back-stories” – to find out how a person ended up where they are today or why someone ended up taking the path that they did. I’ve already discussed how much I enjoyed People Like Us, but my appreciation grew as we talked with the movie’s director, Alex Kurtzman, about the behind-the-scenes details that made the movie what it was.

Is People Like Us based on a true story?

Alex Kurtzman: I met my sister when I turned 30. My dad had had another family before ours. We knew about them growing up, but I’d never met them. My wife and I were starting to think about having kids. And that makes you think about your family and where you come from.

I started thinking about my half-sister and half-brother and wondering who they were and what they were like. And this image came to me – the last image of the movie. I didn’t know who those characters were in the image. But it just struck me very profoundly as the ending to my story. And I thought, “Wow, that seems like a really interesting story.”

And then I went to a party that night. A woman walked up to me and said, “I’m your sister.” So that began the seven years of trying to work through it and separate truth from fiction in order to make a movie. So what you see is I think in many ways very autobiographical and in other ways there’s a lot of invention in there. But I certainly think there’s a lot of emotional and emotional truth for a lot of people in my family in there.

Alex Kurtzman: I took photographs from my childhood. And there are literally pictures of me with 70’s hair and guys with balloons at the park. And so all of that stuff at the end of the movie is sort of taken from my memories of childhood too.

I’ve had the privilege of being able to sit behind directors and watch them do their thing. And, you know, I always got into writing to be a director. Our lives took us down a very different path.

You know, you go where the work is and where life takes you. And it’s been incredible. But I think I’ve always been looking and waiting for that story to go back to the stuff that we started, you know, the memories that inspired us to tell stories in the first place.

I don’t think I could have done this without the experience of working on all those other movies because the set wasn’t intimidating to me. I felt like I’d been there a lot. And I could never have had the crew that I had if I hadn’t made those movies. Because, you know, I made a real point of surrounding myself with people who were far more talented and experienced than I. And what that allowed me to do was in — was to trust them and to, you know. 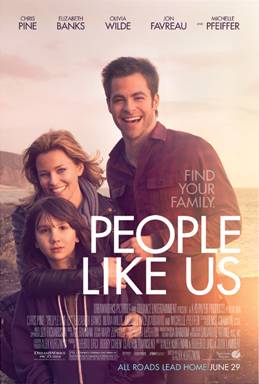 Disclosure: I attended a screening of People Like Us while I was in LA last week. My travel expenses were covered, but all thoughts about my experiences and the movies that I watched are my own.