This past week, after seeing Disney/Pixar’s newest movie, BRAVE, our group of bloggers was able to interview Director Mark Andrews & Producer Katherine Sarafian. 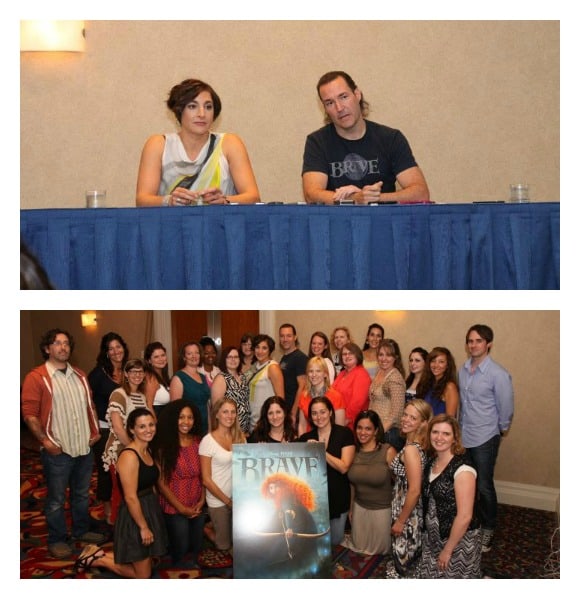 I had already enjoyed seeing Brave the night before, but after chatting with Mark and Catherine, my appreciation for the story, the setting, and all that went into making the movie were taken to a whole new level.

On making a story about a Scottish princess

MARK​:​ The three things that John Lasseter and Pixar look for are…a great character, a great story and a great setting. And so Brenda Chapman, my fellow director on the project, her original pitch was about that parent child relationship based off of her own experiences with her own (at the time) six year old daughter who’s very precocious and independent and talked back.  And she kind of projected ahead thinking about what kind of teenager this little girl would be if she’s already a teenager at six, you know.

On evoking emotion from actors in animated movies

MARK​: It’s very unique in the film world because we’re working out of context because we have to build everything from scratch. Everything. So we’re building our characters from scratch and every sense of the design to help support the story.  So even with these performances we’re building from scratch from the actors aren’t there to feed off of each other, right?  So I have to get them to say the lines in very subtle different ways a lot more because I don’t have them in the room and I can’t say okay, Kelly, Emma let’s do the scene again and Kelly you’re not gonna give up inch of what you want and Emma, you’re not gonna give up an inch of what you want either and be even more aggressive and let’s see what happens.

Animation is devoid of happy accidents. Animation is devoid of organics. So how do I get that in? I have to construct that as a director by projecting ahead and I give them enough to feed the scene because I know about what it’s going to be about.  For example, the argument. I know they’re pleading their case because it’s a desperate time so they go in with that but there’s so much little subtleties in performance that I can get out so I have them say the lines differently so that when I’m back in editorial and I have now Emma next to Kelly and I can say oh, that was a great line from Emma…and that’s how you build upon, build a performance out of it.

On ​the stereotypes and roles of girls and fathers in Brave

KATHERINE​: ​Well, first we had to create the character. We had to put our blinders on about gender and just try to create a heroic character.

Merida’s not ashamed to be a girl.  She wears a dress. She’s happy to wear a dress. She just doesn’t want one that’s too restrictive and tight and I think that’s the kind of girl I was.

So we wanted to create a character who was relatable in that way to audiences of both genders – just like you want to do your own thing.

On how long it took to make Brave

KATHERINE​: ​The entire process? Eight years because the first pitch. In 2004 Brenda Chapman pitched this story about her six year old daughter and the relationship that they were having.  And it didn’t really get a green light until later in 2006 because she sort of worked it and started developing the Scottish setting. And I came on in the end of 2006 and Mark and Brenda and I and the team went to Scotland in August of 2006 and that was when production started so six years from there.

It’s a family.  I think that’s why it’s good to start with a research trip because you better get a bond and you better love each other ‘cause you’re in it together the whole time and it gets hard, really, really hard.  But there’s a lot of love and trust and a lot of collaboration so to see you through.

Brave is in theaters NOW!

Brave opened in theaters this weekend (June 22, 2012). See my review of the film (including age-appropriate recommendations) on my Brave review post from earlier this week, and stay tuned for more behind-the-scenes interviews with the stars of Brave.

Disclosure: I attended the red carpet premiere of BRAVE, as well as activities related to the opening of Disney’s Cars Land. Although my expenses for this trip were paid by Disney, all thoughts on the movies and activities are my own.

ShareTweetPinPocketMail
Around the Blogosphere-Add YOUR Giveaway Link
Cleaning House, a Must-Read for Parents