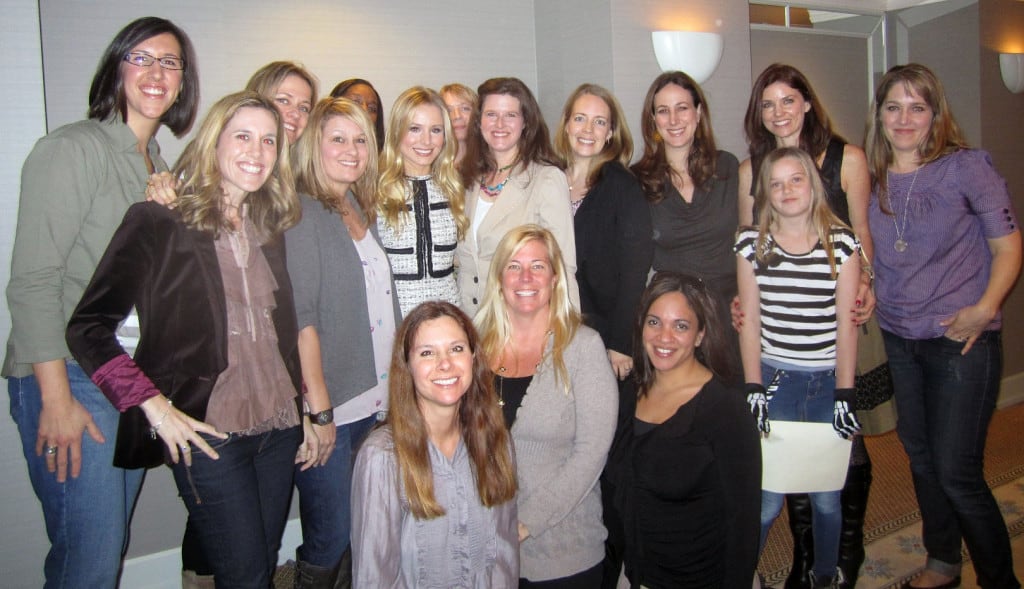 I’ve already told you about our fun interview with Ted Danson and Dermot Mulroney, but it was our first interview with the smart, savvy and very fun Kristen Bell that started the day off on the right foot. 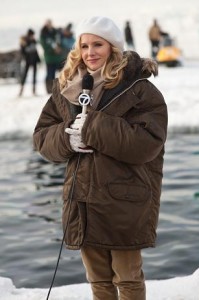 Under those gloves, the nails are perfectly pink Lee Press-on nails, an element that she brought to her character. In 1988 she was young, but remembered coveting her sister’s clothes and hair — and yes, their nails. Sitting beside me at our roundtable, I noticed that her nails were of the shorter style worn today and painted a stylish charcoal color (I also saw that her high heels were kicked off under the table).

I have to admit that the late 80’s setting in the movie gave me an extra measure of delight. Families gathering around their console television sets to watch the nightly news (while eating TV dinners on TV trays), giant headsets tethered to the phone with their curly cords, the hair, the earrings. . . . I lived it, and I remember it all, but at the same time, it felt very much like a period setting.

Because Big Miracle is based on a true story, director Ken Kwapis used real news footage in addition to the scenes written and filmed for the movie, and the switch was seamless, showing just how accurate the 80’s feel was.

Bell is no stranger to the newsroom herself. Because her dad was a news director, she spent plenty of time on set of his newsroom growing up, and she actually pursued journalism in college briefly.

We loved interviewing the cast, but they loved us too!

After Kristen Bell left Liz Gumbinner (Cool Mom Picks) tweeted out from @Mom101 that @IMKristenBell charmed the entire mom blogging panel, and Kristen responded back that we were the “best room all day.”

We felt the warmth. She had stopped herself in the middle of answering a question: “Can I just say how lovely the energy is in here, because I do a lot of these things, and sometimes I’m secretly slitting my wrists underneath the table. And this is just such a lovely group of estrogen, that it’s really refreshing.”

As the others came into our mom blogging panel for the interview, they’d comment “I heard that this was the place to be today.” As Ted Danson left, I overheard him telling one of the studio reps, “That was fun. I could do more of that,” to which I wanted to reply “Come on back then!”

Cast Bonding — on location and in the interviews

I had not participated in paired interviews before, especially with such big names who could definitely hold their own for our entire 20 minute session. But there were some big benefits. We were able to see the way they interacted, and they loosened each other up (read Breezy Mama‘s account of Dermot Mulroney’s conjugal visits to see exactly what I mean).

The group format of having the crew of bloggers (pictured above with Kristen Bell) asking questions works well for us too. There’s always someone who has some sort of connection or question with the actor or their current or previous role that gets the conversation rolling well. And it’s fun for us to share these awesome experiences as well.

In the interview with Drew Barrymore and John Krasinski (stay tuned for more from them), Barrymore was a little quiet while Krasinski easily filled the silences.

Kristen Bell felt a little lonely, since the other talent was paired for their interviews (Danson & Mulroney, Drew Barrymore and John Krasinksi, actress Vinessa Shaw and the real woman she portrayed Bonnie Carroll), but even though I didn’t know much about Bell’s career, her character in Big Miracle stood out, and it turns out we easily filled our 20 minutes chatting with her.

And she gave us the inside scoop about their on-location bonding as a cast: “We ate dinner together almost every night. We explored the city to a certain degree, and there a lot of wonderful sort of cozy pizza joints and movie night places that we went to together. We played a lot of poker in John Krasinski’s room, which was very fun.

There’s a huge mountain called Mount Alyeska, which we hiked to the top of, which was wonderful. And I know a lot of the cast went to Fairbanks and tried to see the Northern Lights and saw an ice castle, an ice hotel.”

Not only did they bond with each other, but they fell in love with the whales, as we do while we are watching them on screen. Ken Kwapis, the director, chose to use animatronic whales as opposed to CGI, and each of the actors told us how real they seemed. 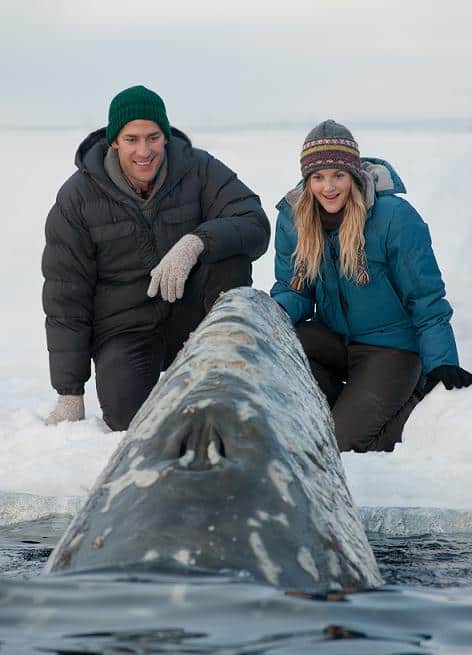 John Krasinski, who plays the Alaskan reporter who broke the story, said, “The animatronic whales were really unbelievable. They were so well done. These guys from Australia built them and engineered them and then were working them. And it was kind of insane because you really did not believe that they were robots. It was very overwhelming to see one of these things pop out.”

“They were more real than some actors I know,” Kristen Bell quipped. “From action to cut, you genuinely felt connected, as if they were animals. At least that’s how I felt. So, it was comedic when they’d raise them up (out of the water), and you’d realize there was some New Zealander with a joystick.”

Big Miracle is now on Pinterest! Check out the film’s boards at http://pinterest.com/bigmiracle PLUS take time to enter the BIG MIRACLE “Pin To Win” Sweepstakes for a chance to win FUN prizes. Find out more details right here.

Truly a movie for the whole family

I can’t wait to share it with my family, because I know that they’ll all love it, which is rare to be confident that my 13-year-old daughter and 7-year-old son, not to mention my husband, will all enjoy the same movie!

**Universal Studios took care of my travel expenses for this lovely trip to Santa Monica, California for the Big Miracle press junket, in exchange for coverage of the movie, however, I was not told what to say. My opinions are completely my own.

ShareTweetPinPocketMail
Around the Blogosphere-Add YOUR Giveaway Link
A Dystopian Romance book pack, Review and Giveaway