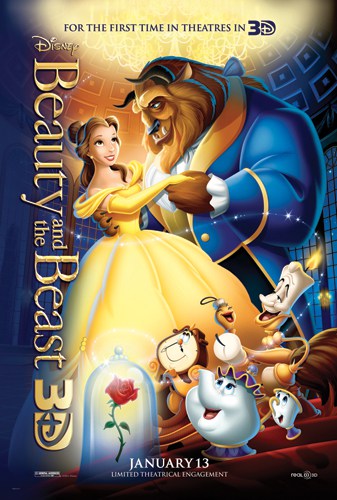 Although I’m not quite young enough to say that I enjoyed the movie when I was a kid, I do remember watching it with my siblings who were little at the time of its release in 1991. We’ve had a copy of the VHS, followed by a replacement DVD version of Beauty and the Beast since my kids were little, and we’ve watched it over and over again together.

Because Beauty and the Beast came out originally before I was a parent, when I saw it in the theater last month I was able to see it through totally new eyes (and I’m not talking about my 3D glasses).

The story of Beauty and the Beast is a true classic, and the songs that were written and recorded for Disney’s version comprise one of my all-time favorite soundtracks.

I’m sure you all know the story line (and if you don’t, then you have even more reason to head to the theater this weekend to see Beauty and the Beast 3D in the theaters. Seriously. Go now), but here’s a little refresher:

About Beauty and the Beast: 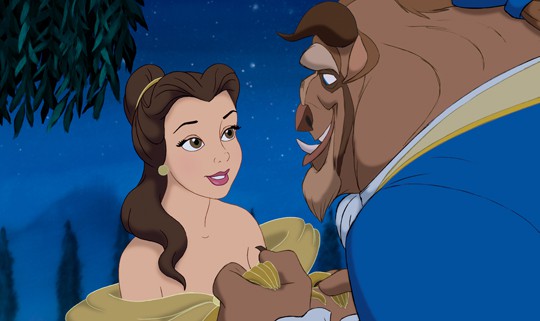 Innovative for its time

When released in 1991, the film was praised not only for its incredible artistry and time-honored tradition of being hand-drawn, one frame at a time, but also for the innovative use of the computer as a tool for adding production value and creating exciting new imagery. Remember when computer animation was cutting edge?

Disney’s Computer Generated Imagery (CGI) department was in its infancy at the time, and they discovered ways to enhance the look of the film while trying totally new, ground-breaking techniques at the same time.

According to CGI artistic supervisor Jim Hillin, “The ballroom sequence featured the first computer-generated color background to be both animated and fully dimensional. What this means is that the background is literally moving. This gives the impression of sweeping camera moves and perspectives as well as theatrical lighting that would otherwise be impossible.”

I loved that Disney stayed true to the original movie and didn’t change it so much that it felt too different. It really was simply an enhanced version of the movie I’ve always loved. And even if nothing had changed, I would still consider Beauty and the Beast worth seeing again (or for the first time) in the theater.

See Tangled Ever After before the show

I got an extra little treat that I wasn’t expecting when I saw Beauty and the Beast in December. Tangled Ever After, a short movie in 3D that continues the story of Tangled (on the wedding day!) was a delight. It had the entire theater laughing. Just another thing to look forward to on January 13!

Beauty and the Beast 3D and Tangled Ever After come to theaters on January 13, 2012 and are both rated G.

What is your favorite scene or song from Beauty and the Beast? What are you most looking forward to seeing in 3D?

Disclosure: I was not compensated for this post, but the trip to New York City and the shows and activities were paid for by Disney/Dreamworks. All opinions are my own.