Lolli here….It’s not every day that I get the chance to sit at a table with an oscar-nominated actress and discuss everything from movies to parenting, but that’s exactly what happened while I was in New York City with Disney/Dreamworks a little over a week ago.

After our group of bloggers attended the world premiere of Steven Spielberg’s War Horse, we were able to meet with Emily Watson, who plays Rose Narracott in the film. Naturally, with a group of mom bloggers like ours, the conversation flowed from making movies to being a mother, and we had a delightful conversation with Emily. 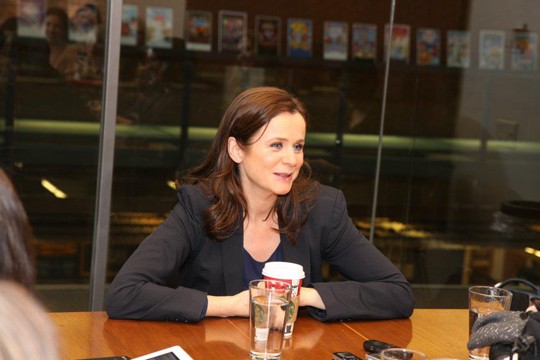 Here’s a little of what she had to say:

What was the most memorable part of shooting the film?

Emily: I don’t know if any of you know Dartmore; have you ever been to England? OK, it’s the most beautiful part of the country. It’s in the southwest, it’s in the county of Devon which is very fecund and rich and it’s a real food producing, very traditional, cream and honey and eggs. In the middle of it is this moorland called Dartmore – you can stand on it and not be able to see any sign of human habitation whatsoever, with these ancient outcrops of rock. So it was pretty special to be there. But getting a call from Steven Spielberg is not a bad day. It’s not a bad day.

Were you familiar with this story prior to doing the movie?

Emily: I saw the stage show in London when I was eight months pregnant. And you know what that’s like. So after about ten seconds, I turned to my husband and I said, “I don’t think I’m gonna get through this.” Yes, it’s very emotional thing, but in addition to War Horse being a story about a boy in love with a horse and their great adventure, it’s kind of an anti-war film for kids as well, I think. It’s in a very, very simple way, that war is inhumane. And the way we treat animals reveals our humanity.

How do you juggle being a mother with your film work?

Emily: Well, the longest I’ve ever been away was three weeks. And that was a disaster. It was really, really horrible. And before that it’s only ever been a week. It’s really a logistical nightmare. It was much easier before Juliet my daughter was in school and I used to just take them with me everywhere, which was great. And I have the best nanny in the universe – she’s absolutely brilliant. She’s very flexible. She lives in while I’m away, she doesn’t live in when I’m there. But, and then she’ll pack a bag and come to Poland or Australia or wherever. My husband is fantastic with the kids. And he works from home. So we somehow always manage to make it work. But the first question I ask when a job comes up is, where? how long? Does it match the school holidays, can they fly us? It’s obviously that’s how it’s got to be.

Have your children impacted how you access emotion as an actress?

Emily: That kind of irritation and anger that is just there, you know, when you’re around kids, is quite easy to access.

But you also seemed heartbroken.

Emily: Yeah, I have to be careful. Putting your real, raw feelings into acting. When I was younger, I used to do it a lot. And I think you open neural pathways that are real, even if it’s for totally fictional reasons. Take for instance you imagine that your children are in an accident or, you know, and that can set you off and make you feel emotional. Which is maybe what you need to get in the right place.

But even so, because every time you get emotional, you have put your body through the chemical response to emotion. And you have to really treat that with respect.

What advice would you give on how to balance a successful career and being a mom?

Emily: It’s so hard. I just say, give yourself a break because it’s really hard. And don’t believe it when you think other people are making a success of it and it’s all smooth and easy…because it isn’t. You know, it just feels like there’s never enough of you to go around. And sleep? But hey, I am having my cake and eating it. I’m very lucky. 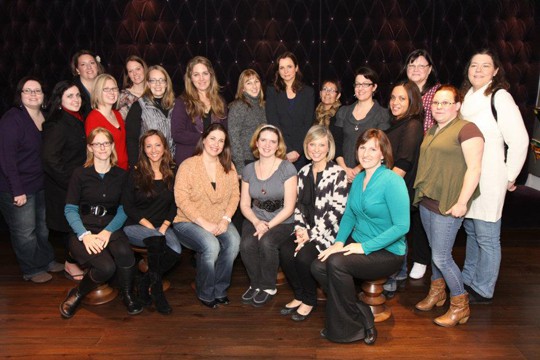 I think we all left our interview with Emily with an even greater respect for her. She was gracious and open with us, and she played an inspiring, emotional role as Albert’s mother in War Horse. She even posed for a few pictures with us afterwards.

Photo of Emily Watson was taken by Louise from MomStart, one of the fellow bloggers on our trip. Our fearless leader, Marshall, took the group shot of all of us after the interview.