My four year old son Jackson is an only child, although if you asked him, you might get a different answer. 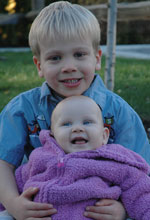 At two, Jackson was talking up a storm and giving us incredible insight into what was going on his little mind.

One day, to my surprise, he told me that he had had an older brother named Kieric (interesting name selection) that got hit by a car and died. From then on he mentioned Kieric daily, often confusing people who believed his sincere little story about his deceased brother.

Around Easter time, the story changed a little and he started telling people that his big brother Kieric had died on a cross. He even told this to his preschool class on family tree day. (Fortunately I had already discussed the issue with his teacher.)

Afterward he asked me with such earnestness and confusion it nearly broke my heart, “Mom, why didn’t the teacher put Kieric on my family tree.” (A few months later the story regulated and Kieric’s cause of death was once again being hit by a car.)

When Julia, his baby cousin, was ten days old, our family took a vacation to our cabin with some friends who had twin 5yr old boys. The first night, as the boys were tucked into their bunk beds, we eavesdropped on their conversation.

“I have a baby sister. I can hold her and feed her a bottle all by myself.”

“Well Jackson…where is your baby sister?”

This relationship to his cousin continued to confuse friends and strangers alike, as Jackson routinely introduced Julia as his baby sister.

Now in my son’s old age, he recently turned four, he seems to have accepted his reality. But he is not above pretending.

“Mom, can we pretend Julia is ours and you are her mommy.”