It doesn’t take long until I know ALL about the latest toy crazes for boys. My eight year old son often tells me about new products before press releases even hit my inbox!

So when the Beyblade anime series “spun” over to North America from Japan, my son and nephews quickly became obsessed with these spinning toys. They collect the toys and accessories, battle with their Beyblades at recess time on the playground, and watch the Beyblade Metal Fusion show on television. 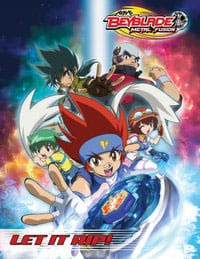 When Jackson first asked for a “Beyblade” I had no idea what he was even saying. I asked him to spell it! LOL But I was immediately immersed in BeyBlades.

When I first brought Jackson home some Beyblades I had to laugh — essentially they are just TOPS!!! Yes, the good old “technology” we used to play with spinning tops when we were kids are just made more cool with Japanese anime!

I have to admit — I like when Jackson, his cousins, and his friends ALL love the same toys. It makes buying gifts for birthdays and holidays SO easy!

I KNOW that Beyblades will be a hit. It is simple shopping for me! 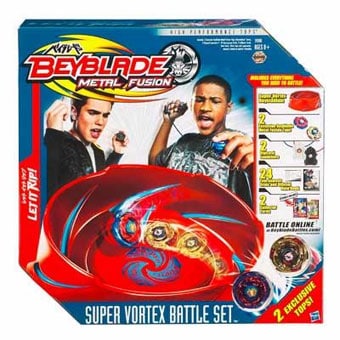 Without a doubt Beyblades are on my list to buy for Jackson this Christmas — I will probably buy them for party favors for his birthday party in January too. As I said, I know that all the boys collect them!

So I knew Jackson would be thrilled to test out the new Beyblade Metal Fusion: SUPER VORTEX BATTLE SET.

The Super Vortex Battle Set is a battle arena for Beyblade tops. It comes with everything your child needs to stage a serious spinning showdown!

There is a wide assortment of Beyblade tops and accessories available this holiday season and can be purchased at most major toy retailers nationwide and on HasbroToyShop.com. If you have a boy between 8-12 years old, I am pretty sure they will love Beyblades. (In fact, they probably already have some!)

And for one of you — your child will get to unwrap and battle this season! One winner will receive the Beyblade Metal Fusion: Super Vortex Battle Set. To enter, simply leave us a comment below!

This giveaway is open to US and Canadian shipping addresses and closes on December 4th. This giveaway is void where prohibited. Please see our site’s terms and conditions for our complete contest rules.