Win a copy of Disney’s new DVD – The Many Adventures of Winnie the Pooh: The Friendship Edition 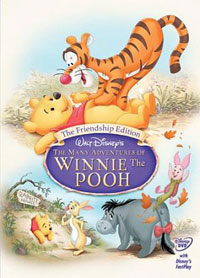 Winnie the Pooh, the timeless, lovable bear, simply never grows old. He is as magical and entertaining now as he ever was. And Disney is celebrating the never-ending friendship that has delighted generations with the new Friendship Edition of “The Many Adventures of Winnie the Pooh”, Pooh’s first and most beloved feature film.

This new edition is digitally restored and remastered, and packed with bonus features:

Winnie the Pooh is adored here at our house too. Both Jackson my five year old son and Julia my two year old niece, bounce with excitement over Winnie the Pooh and his cuddly friends. And the excitement is never higher then when they get to watch “The Many Adventures of Winnie the Pooh” – Pooh’s classic, first feature film. 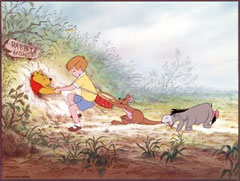 So when we were asked if we wanted to giveaway this new edition to you, we immediately said yes. It doesn’t get better for kids than Winnie the Pooh!

We got the chance to check out this new edition and our kids love the new bonus features. Jackson especially enjoys the episode of new series “My Friends Tigger and Pooh” where the crew of friends are super sleuths, solving little mysteries, and the interactive features like Disney Storytime: “Pooh’s Shadow” and the Sing Along Song: “The Wonderful Thing About Tiggers”

If you would like to win a copy of Disney’s new DVD – The Many Adventures of Winnie the Pooh: The Friendship Edition, we are giving away three copies. Just leave your comment at this post and we will announce the winners in one week. (This contest is open to both Canadian and US shipping addresses.)