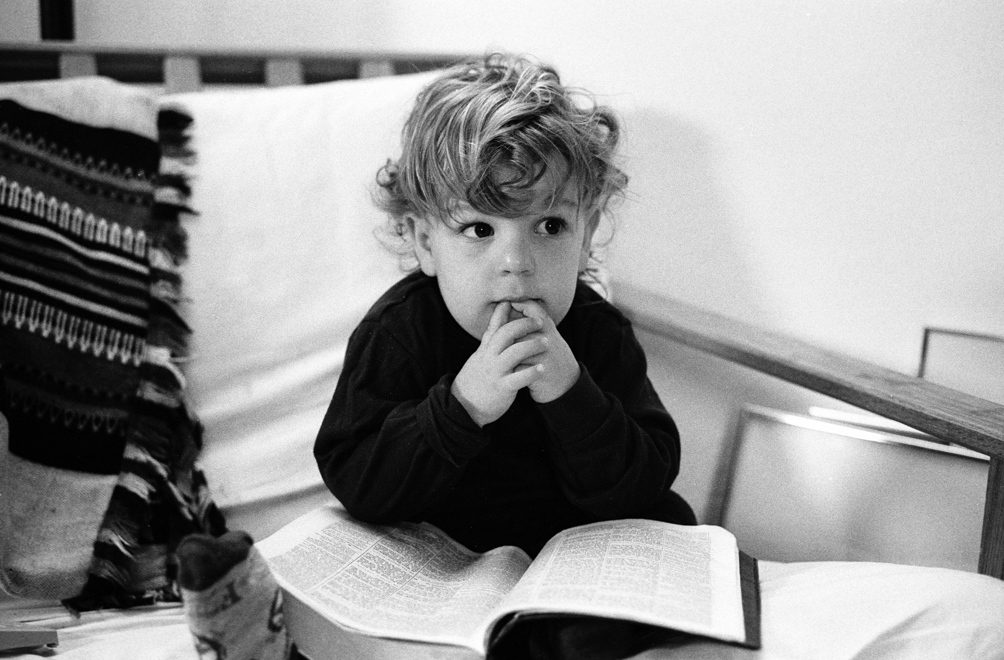 Elizabeth is a reviewer at 5 Minutes for Books. She’s here to share her slightly tongue in cheek thoughts about how reading had some negative affects on her child. Is reading bad for kids? You decide:

Parents get a lot of messages from our society, but one of the least controversial and most ubiquitous is the advice to read to your kids. Read lots. “You can’t read too much,” I’ve been told, although I know that’s not true because I can, and do. (Really. We eat supper late almost every night, and sometimes I’m not as prepared for teaching as I should be and I’m running late because I was reading. The struggle is real.)

So naturally, as an avid reader, I was excited to have children. A chance to experience all my childhood favs through fresh eyes! I read the Narnia books to Elliot when he was a month old, while I was nursing him, which many people found slightly obsessive. When the twins came along, I would read books to Elliot while I nursed them. I had all his books memorized, so I only needed to see what page we were on to declaim, “And now, cried Max, let the wild rumpus start!” or “I would not eat them in a box; I would not eat them with a fox” or whatever book it was. “Now turn the page,” I’d say, and he would, and that’s how I managed to nurse twins and keep a 2 year old happy at the same time. 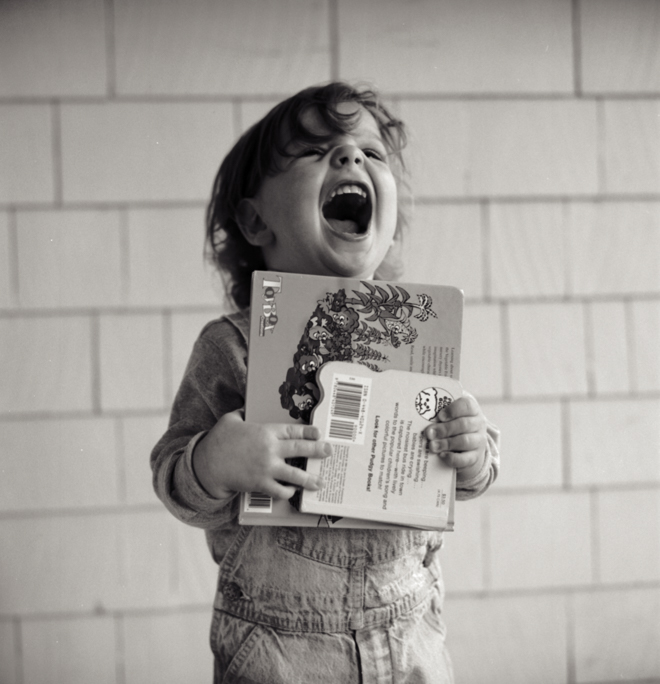 Elliot, about 2 years, before his love of books complicated things

So I was unprepared for the negative side of reading that soon made an ugly appearance in my toddler. Elliot was only 3 when the influence of literature began to show in his life. It all started with Curious George.

For those of you who haven’t read the Curious George books lately, I would like to stress that he is not a good role model for those fond of the quiet, contemplative life. After reading Curious George Gets A Bike, in which George makes boats out of newspapers instead of delivering them, I thought it would be a fun idea to make our own boat. What a great quality moment. Best of all, our boat actually floated!

Big mistake. After that, every morning, the race was on….would I get the paper first and place it on a high shelf until I had the chance to read it, or would Elliot seize it and flee with it to the bathroom, where it would be crumpled beyond repair and thrown into the bathtub, which was always damp enough to ruin it?

My next reading mistake was Curious George Gets A Medal. That’s the one where George gets a letter, decides to write one back, finds the fountain pen dry, and spills a bottle of ink on the floor while trying to fill the pen.

This led to a Saturday morning in which I got up and staggered into the kitchen to get the twins their juice. An amazing sight met my eyes. In the middle of the floor was one of the dining room chairs, surrounded by dark, suspicious-looking-but-delightfully-scented puddles. “I spilled the ink,” announced Elliot cheerfully, following me into the room. My nose told me otherwise, not to mention the empty bottle of vanilla extract floating forlornly in the largest puddle, along with an ordinary ball-point pen.

When he about 6, I let him start reading my collection of Calvin and Hobbes books. Since in the intervening years we had survived Charlotte’s Web without starting a collection of spiders and the Little House books without having to make a ball out of an inflated pig’s bladder, I had assumed we were out of the woods. But I noticed a personality change during the months in which he read Calvin and Hobbes pretty much exclusively. He became more hyper, interrupted more, just got generally bouncier. He stuck his tongue out more. Suddenly, one of his stuffed animals, a bear named Shepherd, became very dear to him and had to have its own chair and plate. 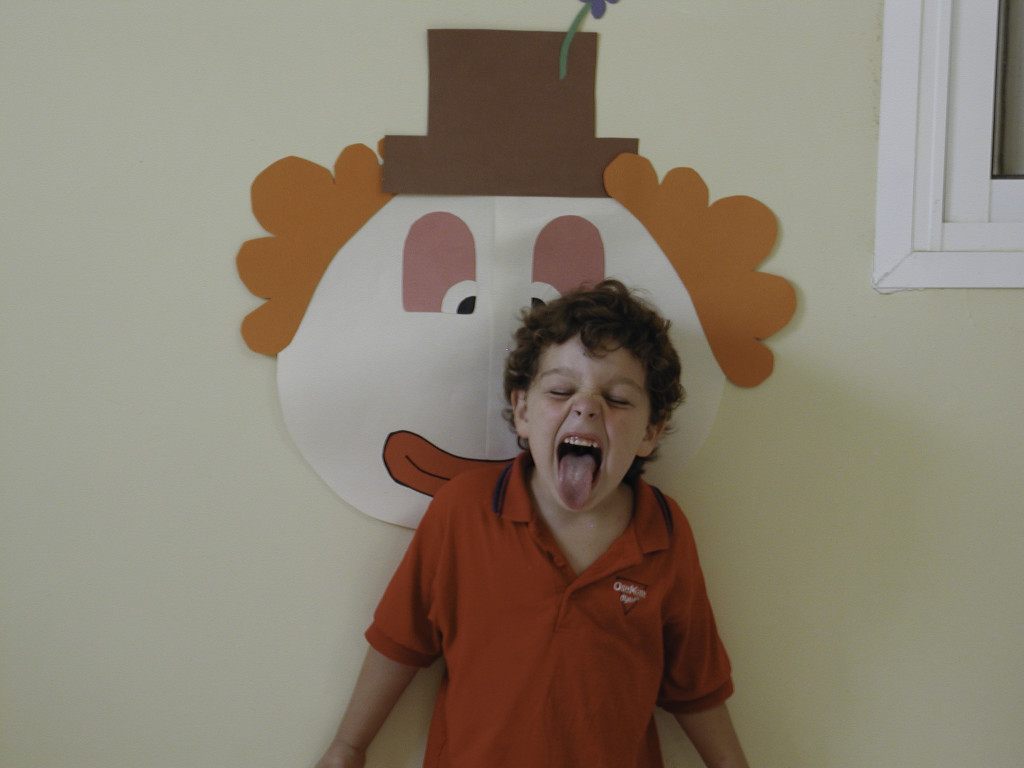 Elliot on his 6th birthday, at the height of his Calvin and Hobbes obsession

I was somewhat bemused. It went against everything I believed in to curtail his reading, but I felt I had enough going on without dealing with a child trying to model himself on Calvin. Calvin is delightful on the pages, but tiring in real life, and also, frankly, Elliot was not nearly as witty at 6 as Calvin is. I needn’t have worried. We were living in Mauritania at that point, and the dry heat ruined a lot of my older books. Our copies of Calvin and Hobbes disintegrated, and he moved on to the Hardy boys, which was a relaxing phase because everytime I asked where something was, he would put his mind to it and try to discover clues.

Now he’s 19, in university and still appreciative of books, although the years have brought a measure of wisdom and perspective, and I no longer fear allowing him near Curious George. But for those of you just starting this parenting journey, I wanted to warn you.

And yes, of course when he has kids I’m getting them ALL the Curious George books. AND Calvin and Hobbes. And this time, I’m just going to sit back and laugh.