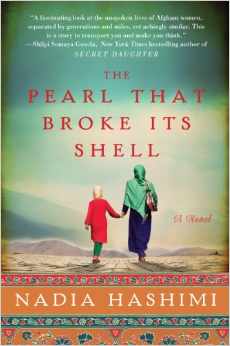 “Seawater begs the pearl/To break its shell,” reads a line from the poem Some Kiss We Want, written by a 13th-century Persian poet. But in the novel The Pearl that Broke Its Shell

, pearls break their shells at a very high risk. This  novel about Afghani women is set both in present-day Kabul and 100 years ago and tells the story of two women who both set about to make their own destiny.

Rahima comes from a family of girls–5 daughters and no sons, a curse from Allah, her father moans. 2 of the girls are still small, but the 3 oldest (approximately 9, 11 and 12) are kept home from school after a boy pays too much attention to them as they are walking home. Their father doesn’t really care if they get an education or not, and his love of opium dims his ability to provide even further. One of the few bright spots in a life of want is the girls’ aunt, Shaima, who provides both inspiration and practical ideas. Her practical idea comes in the form of an ancient practice called bacha posh, and her inspiration through her stories of the girls’ great-grandmother, who also fought against destiny and won.

And so Rahima becomes a bacha posh, a girl who dresses as a boy. Suddenly she is Rahim. She goes out boldly to the marketplace, attends school with the boys, and finds herself excused from household chores. She thrives on this newfound freedom for 4 years until one day, her mother catches her wrestling another boy and, shocked, instantly transforms her back into a girl. She had already caught the eye of someone in the marketplace who recognized her disguise though–a local warlord, a cruel man with 3 wives who is accustomed to doing whatever he likes. Her greedy, opium-addled father is all too happy to have a connection to such a powerful man and essentially sells his 3 daughters to become wives of men in their 40s and 50s. It’s disastrous of course. The girls–now 13, 15 and 16–essentially become slaves to their mother-in-laws and the older wives, many of whom are jealous, demanding and even downright abusive. Meanwhile, Rahima’s husband in particular keeps her (and the other women) on a very short leash,  and in ignorance of any other way of life.

The Pearl that Broke Its Shell

by Nadia Hashimi plays with the idea of destiny, or naseeb. Is it fixed by Allah or can we change it through choices we make and opportunities we create? Both Rahima and Shekiba are strong-willed women, continuing on through hardship after hardship. In a discussion with her aunt Shaima, Rahima realizes that we can’t know our destiny but that shouldn’t stop us from trying to make it a good one, and that one doesn’t have to just meekly accept all circumstances without doing what one can to change them–even if on the face of things, she is completely powerless in a society that disempowers women and with a controlling, abusive husband who is aided and abetted by his mother.

And so, in spite of truly horrific circumstances and what seems many times to be the death of hope, The Pearl that Broke Its Shell

manages to instead offer hope. It’s very well-written, and I was impressed that the characters manage to be somewhat nuanced–for example Rahima’s abusive mother-in-law once shares how she was herself abused by her own mother-in-law. I also liked how Rahima meets some other Afghani women and realizes that not all men and women are as hide-bound as most of the ones she’s known, although of course it also shows how little progress has been made for Afghani women’s rights in the last century. It’s an excellent book, taking its reader to another world and entering behind the doors to show the reality of life for all too many women. I can’t recommend it highly enough.

I’m happy that one of you (U.S. only) can enter to win a copy of this book. Use the widget below to log in one or more entries.