Jon Hamm stars in the upcoming movie “Million Dollar Arm,” which is the true story about two young men who went from never throwing a baseball to getting a Major League tryout. 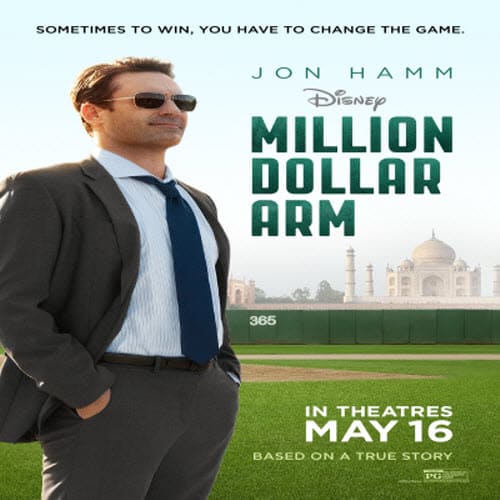 To celebrate the opening of the movie Disney is giving amateur baseball pitchers in the nation a chance to compete for a $1 million prize in the Million Dollar Arm Pitching Contest.

Amateur baseball pitchers—male or female, who are legal United States residents at least 18 years of age or older—are invited to qualify to compete in the preliminary rounds of the Million Dollar Arm Pitching Contest at either Walt Disney World® Resort in Florida, Disneyland® Resort in California or at the Tribeca/ESPN Sports Day at the Tribeca Family Festival in New York City.

The three contestants from each location who throw the fastest pitches will advance to the finals and have a chance to compete for a $1 million prize at the world premiere of Disney’s “Million Dollar Arm” in Hollywood, California. Official rules are available on Disney.com’s “Million Dollar Arm” homepage at http://disney.com/PitchingContest.

MILLION DOLLAR ARM opens in theaters everywhere on May 16th!