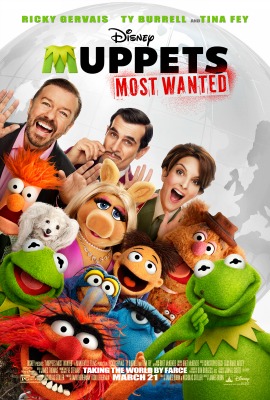 Disney’s “Muppets Most Wanted” takes the entire Muppets gang on a global tour, selling out grand theaters in some of Europe’s most exciting destinations, including Berlin, Madrid, Dublin and London. But mayhem follows the Muppets overseas, as they find themselves unwittingly entangled in an international crime caper headed by Constantine—the World’s Number One Criminal and a dead ringer for Kermit—and his dastardly sidekick Dominic, aka Number Two, portrayed by Ricky Gervais.

Also, in celebration of the trailer release, each of the Muppets have also published their own “most wanted” guest blogs. Read them now:

ShareTweetPinPocketMail
3 Surprising Reasons to See the Book Thief with Your Family
Win $100 while finding great prices on LG Electronics at WalMart.com

Nolie loves to share stories of her life, her boys and anything else on her mind over at her blog Nolie's Place.