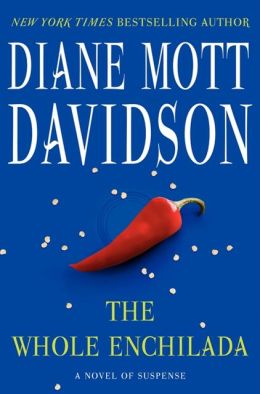 Goldy Schultz is a caterer, but she throws a Mexican potluck for her son’s and his best friend Drew’s joint 17th birthday party. When Drew’s mom, a good friend of Goldy’s, dies immediately following the party, she’s hearbroken in The Whole Enchilada by Diane Mott Davidson. While initially it looks like Holly died of cardiac arrest, small things quickly start adding up to potential murder. Goldy puts on her investigating shoes, along with her nosy friend Marla, and begins digging to find out who could have done this to their friend and why.

The Whole Enchilada is the sixteenth book in the Culinary Mystery Series featuring Goldy Schultz nee Goldy Bear. While I had niggling suspicions throughout the book that there were previous books in the series, there was nothing in the book that I needed to know from previous books, nor would previous books be ruined by my reading this first.

I had the sense from many of the characters that there was backstory to them that I didn’t know, but it wasn’t critical to the story. The only confusing thing was a friend of Goldy’s son Arch named Gus who appeared in the book but was never explained well. He was a minor character so something I could gloss over without too much of an issue, but every time he was mentioned, I wondered who he was and where he came from.

In The Whole Enchilada, Holly has pulled away from her friendship with Marla and Goldy. She seems to be keeping secrets from them, including why she moved back to Aspen from Denver and the fact that she sold her and her son’s Audis and lost her house in foreclosure. All three women are friends from their Amour Anonymous days, a divorcee support group, and the three of them were all well provided for by their excessively wealthy husbands, making Holly’s financial straits even more confusing.

Her murder isn’t the only mysterious act as Goldy quickly falls through Holly’s deck at her rented home and injures herself and there are other murders. They all appear to be tied together, but neither Goldy nor her sheriff husband Tom can find the common thread that explains it all.

From Goldy and Marla’s overbearing personalities to the Amor Anonymous, the book is a bit campy and overdramatic. Marla continually doling out hundred dollar bribes in cash to extract information from people tangentially related to the case is a bit of a stretch, but it’s still fun. You know you’re reading fiction, and it isn’t very realistic fiction, but that’s ok.

There are multiple issues and subplots occurring throughout the book, which keep it moving. It doesn’t simply focus on Goldy and Marla tracking down Holly’s killer for almost 400 pages. It includes interactions with her son – touching I found that she was working so hard to create a balance that wouldn’t alienate her 17 year old – and family, plus the craziness of running a catering business because no party she caters goes as planned, which is half the fun.

I don’t know that having read this book I need to race out and read the previous 15 books in the series, but Diane Mott Davidson is a New York Times best selling author, so I know there are plenty of enthusiastic fans who would heartily disagree with my enjoyment of the book without the need to go back and start from the beginning.

One note I did appreciate came at the end of the book. As Goldy is a caterer, there are several recipes in the back of the book for foods mentioned throughout the book. The enchiladas suizas that she made for Arch’s birthday party are there, as is Dad’s bread that helped save a suddenly larger dinner, plus more. There are several that I’m intrigued by and plan to experiment with – starting with the sugar free gelato (that I will quickly fill with sugar). I love when books that involve characters who have a passion for cooking share recipes.

Written by Michelle who is always looking to be inspired by new foods. See what she’s cooking up on her blog Honest & Truly! or follow along with her on Twitter where she is also @HonestAndTruly.

One of you will win a copy of The Whole Enchilada.