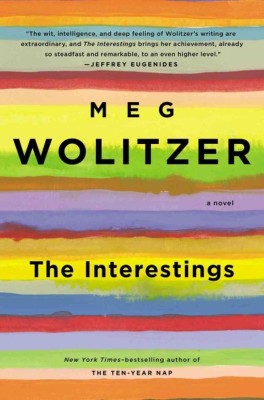 Following a cast of characters through their lives over almost forty years is a formidable task, yet it’s one that Meg Wolitzer has taken on with her new novel The Interestings. This is one of this season’s much-talked about books, and after consuming the 480 page novel in just a few days, I’m in the “loved it!” camp of readers.

In the summer of 1974, Julie Jacobson went away to an arts-themed summer camp run by two aging hippies, and at fifteen, the course of her life was set into motion as the result of one nonchalant invitation. After accepting her tent mate Ash’s invitation to hang out with her group of friends, Julie was transformed from a self-perceived “nothing” into Jules, someone who belonged in a group of irony-loving, slightly profane adolescents. The six teenagers who sat together in Boys Teepee 3 could never have fathomed the ways in which their futures were intertwined, with some relationships set to wax and wane over the years, and others to go down unimaginable paths. That first night they all crowded onto the dirty floor of the teepee, their jokes a mix of typical adolescent silliness and a budding sense of the disturbing nature of the politics and social issues of the day, they embraced a name for themselves. “The Interestings” was meant to be ironic, a stab at their perceptions of being inconsequential. For Jules, in her awe at these personalities like none she’d ever met before, the name was more than fitting:

The name was ironic, and the improvisational christening was jokily pretentious, but still, Julie Jacobson thought, they were interesting. These teenagers around her, all of them from New York City, were like royalty and French movie stars, with a touch of something papal. Everyone at this camp was supposedly artistic, but here, as far as she could tell, was the hot little nucleus of the place. She had never met anyone like these people; they were interesting compared not only with the residents of Underhill, the New York suburb where she’d lived since birth, but also compared with what was generally out there, which at the moment seemed baggy suited, nefarious, thoroughly repulsive.

Jules finds the others the most fascinating, often continuing to feel like an outsider among the group even many years later. Yet Wolitzer has made her the center of the story, with the others’ lives being described around her and her perception of them. None of them are perfect by any means, and through the course of almost four decades, they all make missteps in their own ways, and to certain degrees of significance. Through it all, though, they remain emotionally connected in a way that can often happen when people first meet at such a pivotal time of development.

Wolitzer is a masterful storyteller, taking readers from one moment in time to many years later with a seemingly passing statement, subtly foreshadowing events to come or referencing a distant time in the future. The chapters don’t always flow chronologically, but the tone is set in a way that it’s easy for readers to make the jumps in time, altering the images in their heads to account for aging or setting changes. The shifts allow for the stories to unfold gradually, and some character developments change course as stories are unveiled from the past. Personally, I loved this format, coming to expect some twists and turns from the past to be revealed to help inform the characters’ situations in the present time. I was completely drawn in by The Interestings, an incredible character-driven novel that had me openly weeping at times and utterly fascinated from beginning to end.

Have I gotten you interested? We have one copy of THE INTERESTINGS to give away today. Enter via the rafflecopter below, US and Canada shipping addresses only, please.