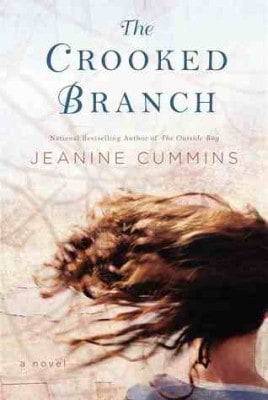 I’m a big fan of historical fiction, with one of my favorite locations and time periods being New York City during the mid 19th century, when thousands of Irish immigrants arrived, fleeing the famed potato famine.  But the famine itself is a subject that’s not well-covered, so I was happy to receive The Crooked Branch, the second novel by the talented Jeanine Cummins,  for review.

Majella has just given birth to her daughter, but is having trouble connecting with her. She’s hearing a crunching sound and thinks she might just be going crazy. She’s also discovered that her video baby monitor is on the same frequency as a neighbor’s, and spends more time than she’d care to admit spying on twins who seem to spend a lot of their time alone in their cribs while someone cries in another room. When she comes across the diary of an ancestor who admits to having killed someone in front of her own daughter, Majella wonders whether she really is crazy or if she’s just genetically programmed to be a bad mother.

150 years earlier, Ginny is living a simple existence in her home in Ireland, caring for her family and the potato crops that feed them as well as pay their rent to the uncharitable landlords. Then the blight arrives, destroying the very thing they depend on, sending her husband to America to earn the money to keep them alive. Several months pass without a word from him, so after learning of a position opening up in the home of a wealthy English woman, in desperation Ginny leaves her children and applies for the job. She enlists the help of an old friend, who is the driver for the English woman, to bring food to her children, and soon gives birth to her fifth child. When the unthinkable happens back home, Ginny makes a decision that will change their lives forever.

The Crooked Branch alternates between Majella in Brooklyn in the present and Ginny in Ireland in the past.  The transitions aren’t always seamless and it takes some time for the correlation between the two stories to emerge, but the novel is well-written and the characters are believable.  Ginny and Majella would both do whatever it takes to provide for their children, though their circumstances are drastically different.  The contrast between the two women is jarring – one is strong because that’s the only way she’ll survive, and her future great-granddaughter’ problems are enormous to her but would have seemed ridiculous to someone on the verge of starvation.

We have 1 copy for one lucky winner, U.S. only.  Leave a comment below to be entered to win.