ShareTweetPinPocketMail
{Guest post from Natasha Nicholes from Houseful of Nicholes.}

My Lords and Ladies, let the fun begin!

That’s the frame of mind my Houseful was in when we trekked to Schaumburg, Illinois for an afternoon of knights, food, and fare at Medieval Times. 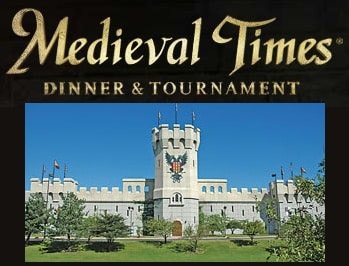 Upon entering the castle, we were greeted with several “M’ladies” (my two daughters and I) and “M’Lords” (my husband and two sons) and were shown inside the castle to take photos and enjoy beverages while we wandered around the castle, until the start of Knight Training.

We were able to observe Knight Training for my 12 year old son in the royal court. There he and other young men learned specific swordsmanship stances with wooden swords and were able to do a call and repeat with three of the Knights of the Realm. Even though it was pretty obvious that my son was one of the older Knights in Training, he seemed to genuinely have a great time swinging and blocking and using weaponry from the medieval age. Knight Training took place an hour before showtime and is recommended for boys 5-12 years of age. It’s free with any paid admission, and is open on a first come, first served basis. As an extra incentive, they give out wooden swords and shields at the end of training.

After training was the show. I can assure you, it’s magnificent. Moreso because EVERYONE who works there has literally transported themselves back in time to the 11th century. The accents, the traditional dress, and the joy in feeling like you are indeed a guest of the King and his court just makes you feel wonderful. I kept wanting to bow or something! We were seated in the Red section, and promptly introduced to our server for the evening who gave us instructions for cheering. Ultimately, we wanted our Knight to win it all, but we also were able to cheer for any of the other Knights on our side of the court. 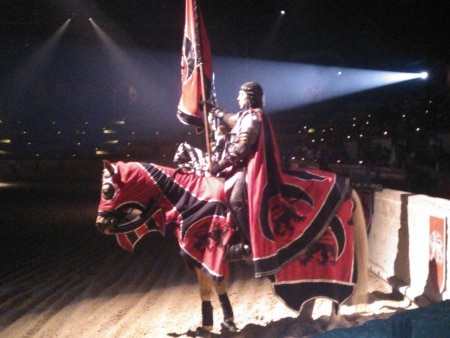 While we were being regaled with several competitions between each of the Knights of the Realm, there were several small shows in between. My favorite had to be the Falconer, mostly because I was a *little* afraid and amazed at the Falcon that didn’t seem to want to land again. It swooped over all of the heads of the guests and continued to circle until it caught the prey that it’s trainer was swinging on a long rope. There was also a review of horses and several tricks, and even a little comedy between the King and Lord Chancelor. You should also be prepared for a protagonist to show up sometime in the show and give the King an ultimatum. We don’t like ultimatums!

There are a couple of pieces of advice that I have for you all. Come HUNGRY. There was so much food that we had to take some home. Our four course meal consisted of Dragon’s Blood Soup (tomato bisque) Dragon Scales (focaccia bread) Baby Dragon Fowl (an entire half of a chicken) One Dragon’s Rib (one spare rib) and Dragon Fingers (large potato wedges). You are given two large soft drinks and apple pie as desert. When I say that I was full, I’m not kidding. Be prepared to eat with your hands only as well, because, well, there were no instances of silverware in the 11th century. My children LOVED that aspect of it. The touch of pewter plates and bowls really made everything feel genuine as well. 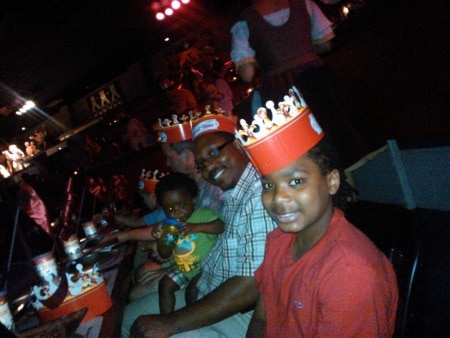 The show lasts approximately two hours and consists of small contests between all six knights until one is proclaimed a winner. When each knight successfully completes a challenge, he is given flowers from the princess to give to the young ladies in the audience. My daughter was over the MOON when she received her very own pink carnation from the Red Knight – right after he kissed it. I tell you, such a romantic this one is. I’m thinking that she was the luck that he needed to pull out and beat all the other knights of the Realm. 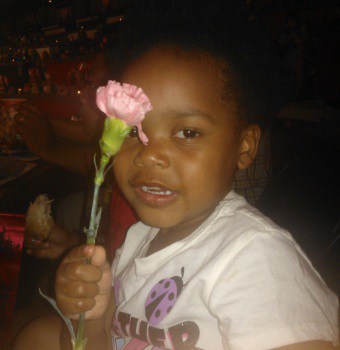 At the end of the show, we were able to take a quick tour of the stable and the dungeon. I’m SO happy that medieval torture does not exist anymore, because the methods that they used were hard-core. I will go ahead and let you know that this area may not be suitable for younger children, or adults who offend easily. It was definitely history filled, and a little bit scary.

I’m anxious to visit again, and hopefully, when we go back, our Knight is the lucky one again! I wouldn’t bring my young twins again though. Mostly because their attention span was lost before the main entree even came out. We had to entertain them a little bit more than we wanted, and they were considered lap babies, so my husband and I didn’t have a lot of comfort. My 3yo daughter enjoyed herself just fine. I *may* have screamed my head off in support of our Knight, and was super happy at the fact that he won.

We have a 4-pack of tickets for Medieval Times at Chicago Castle in Schaumburg, Illinois. Tickets must be used within 60 days of the winner being announced, advance reservation is required (Medieval Times will contact our winner to make arrangements). Value of this prize is $240. Just use the Rafflecopter form below to enter this giveaway. New to Rafflecopter? Watch this 45-second video on how to enter!

Disclosure: Author received complimentary admission and dining in order to facilitate this review. No other compensation was received. All opinions expressed belong to the author.

Natasha Nicholes is the genius mind behind Houseful of Nicholes, a blog where she shares the daily happenings of her family. This family consists of her husband, Mr. Houseful, oldest son – the cellist, the 3 year old – ladybug and her set of twins Lil’ Miss and Sir Twizzler. Life is busy, but bountiful and blessed. You can find her trying to take over the world, or cavorting in the nearest JoAnn Fabrics in Chicago.